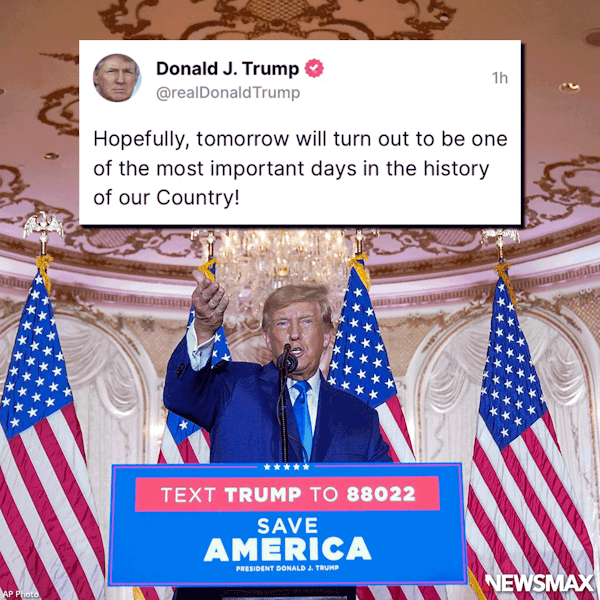 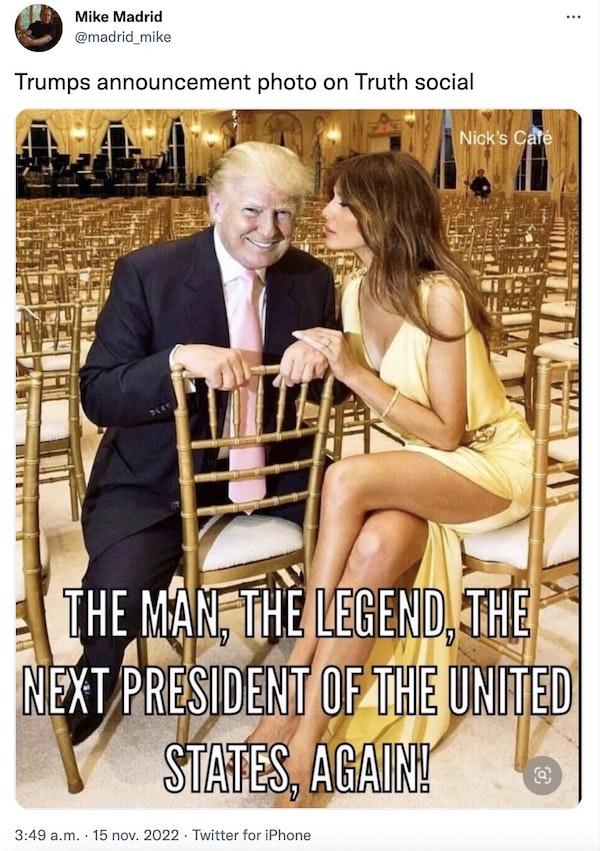 Minutes after Donald Trump announced another run for the White House, Ivanka Trump released a statement to CNN, saying she didn't plan to be involved in the campaign.

CNN was first to report last week that Trump's daughter and her husband, Jared Kushner, would not campaign on behalf of Donald Trump.

“While I will always love and support my father, going forward I will do so outside of the political arena,” said Trump, who did not attend Donald Trump’s announcement at Mar-a-Lago Tuesday evening. “This time around, I am choosing to prioritize my young children and the private life we are creating as a family.”
She added: "I am grateful to have had the honor of serving the American people and I will always be proud of many of our Administration’s accomplishments."

En dat precies zegt hij dus nu! Het is echt zo.
'We must thank the democrats for the pause'
Amen!

Is That All There Is - Peggy Lee
youtu.be/LCRZZC-DH7M

Is The Donald nou al begonnen?

Peace in our time! Gebroken geweertje!

"Dit is de beste Faith No More song ever Theo"

Watch out where the huskeys go....

The Temptations and Black Sabbath - "Get Ready for the Grave"

Motörhead – I Don’t Believe A Word

Motörhead - (We Are) The Road Crew
www.youtube.com/watch?v=MQ9V5cRSOPg

Kodaline - All I Want
youtu.be/jGUASAxXwg4

Those were the days my friend - Mary Hopkins
youtu.be/y3KEhWTnWvE

Some Demons are real..

I’m not talking about the fact that Trump holds what I consider reprehensible policy views or even the fact that he engaged in several acts, including an attempt to overturn a national election, that can reasonably be described as seditious. Clearly, most of the G.O.P. is OK with all of that.

I’m talking instead about the evident perception by many Republicans that Trump is a strong leader, when he is in reality extraordinarily weak.

Trump, however, comes across as 76 going on a very bratty 14. He veers, sometimes in consecutive sentences, between cringeworthy boasting (what kind of person describes himself as a stable genius?) and whining, between bombast and self-pity.

On foreign policy, North Korea’s Kim Jong-un played Trump for a fool with empty reassurances about denuclearization. China’s Xi Jinping did much the same over trade, getting Trump to pause his tariff hikes in return for a promise to buy U.S. goods that proved entirely empty.

In short, Trump’s performance in office was feeble — especially compared with that of his successor.

President Biden didn’t get everything he wanted on domestic policy, but he did get a major infrastructure bill and, in the Inflation Reduction Act, both unprecedented spending to fight climate change and a significant strengthening of health care. And Democrats’ unexpectedly strong showing in the midterms probably ensures that these policy successes will endure.

Wish we could turn back time
To the good old days
When our mama sang us to sleep
But now we're stressed out
m.youtube.com/watch?v=pXRviuL6vMY
Twenty One Pilots - Stressed Out

In het nieuwe ook hoor. That's where you go wrong