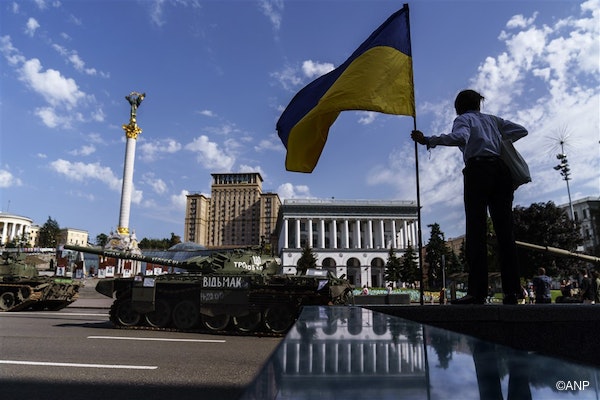 Citaat: “ In view of their need for foreign technology and further capital, the Ukrainian agro-holdings are interwoven with transnational capital through the stock exchanges in London, Frankfurt or Warsaw (UkraineBusiness insight, 2012a: 8–10). European Pension funds as the Third Swedish National Pension Fund and the Dutch Pension Fund for Care and Well-Being are involved in agricultural companies (GRAIN, 2012).“

Belarus has been Russia's main ally in its invasion and allowed Russian troops to enter Ukraine through its border.

"I am convinced that today's disagreements will not be able to destroy the centuries-old foundation of sincere, good-neighbourly relations between the peoples of the two countries," says Lukashenko.

He adds that Belarus will continue to stand for "preservation of agreement, development of friendly and mutually respectful contacts at all levels".

“There are three possible outcomes to this war’: Henry Kissinger interview

If Russia stays where it is now, it will have conquered 20 per cent of Ukraine and most of the Donbas, the industrial and agricultural main area, and a strip of land along the Black Sea. If it stays there, it will be a victory, despite all the setbacks they suffered in the beginning. And the role of Nato will not have been as decisive as earlier thought.

The other outcome is an attempt is made to drive Russia out of the territory it acquired before this war, including Crimea, and then the issue of a war with Russia itself will arise if the war continues.

The third outcome, which I sketched in Davos, and which, in my impression, Zelensky has now accepted, is if the Free People can keep Russia from achieving any military conquests and if the battleline returns to the position where the war started, then the current aggression will have been visibly defeated. Ukraine will be reconstituted in the shape it was when the war started: the post-2014 battleline. It will be rearmed and closely connected to Nato, if not part of it. The remaining issues could be left to a negotiation. It would be a situation which is frozen for a while. But as we’ve seen in the reunification of Europe, over a period of time, they can be achieved.“

According to Transparency International's 2021 Corruption Perceptions Index, (a scale of least to most corrupt nations), Ukraine ranked 122nd out of 180 countries in 2021, the second most corrupt in Europe, with Russia the most at 136.

Of was het een boze lover?

“ Kissinger, perhaps no one can claim that he or she knows about Russia better than him, is not advocating that Ukrainian territory should be relinquished to appease Moscow. He is simply saying that none of the sides can win this war in the near future. Neither the Ukrainian forces, despite the full throttle support of NATO, can push back the Russian forces beyond certain “soft points” in the area, nor has the Kremlin the intention and logistical capability at the moment to move further inside Ukraine.”