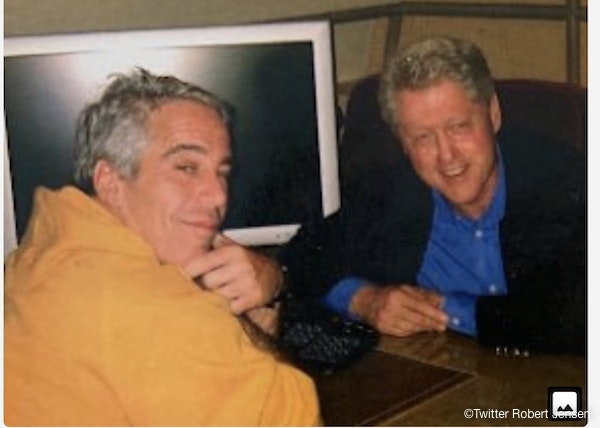 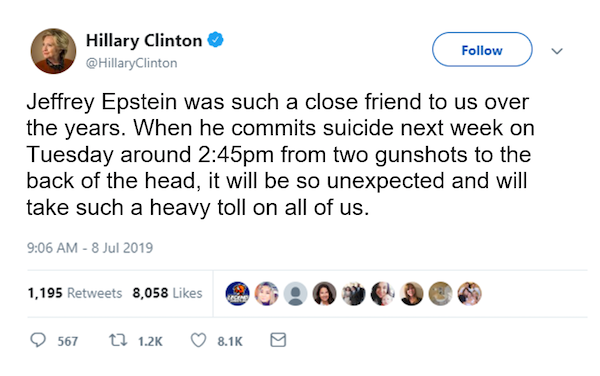 Moord? of zelfmoord? Who cares?

Die van:
"One Nation, Under Wood"?

The show must go on.

Of is het gewoon nogal onwelgevallig?

Dat is wat Acosta zei: “I was told Epstein ‘belonged to intelligence’ and to leave it alone."

Nobody saw this coming...

I tell you Pumba, this stinks. Oh, sooorryyyy. No not you Pumba!

The Clintons killed another one...

I did NOT have a sexual relationship with those underaged girls.

citaat:"One woman has been a constant in the ever-shifting cast of females with which Jeffrey Epstein surrounds himself.
Ghislaine Maxwell, glamorous daughter of the late, disgraced newspaper tycoon Robert Maxwell, is different from the other women in Epstein’s life in many ways but, most obviously, at 49, she is a lot older. She is also Epstein’s Girl Friday, his fixer – central to his operation.
It was Ghislaine who, in 1998, recruited the 15-year-old Virginia Roberts to work as Epstein’s ‘masseuse’.
Meeting Epstein for the first time at his Palm Beach mansion, Virginia was led into the massage room by Ghislaine. After a bizarre interview conducted by a naked Epstein, Ghislaine told Virginia to follow her instructions."

Citaat: "On 5 November 1991, Maxwell was last in contact with the crew of his yacht, the Lady Ghislaine, at 4:25 a.m. local time, but was found to be missing later in the morning. Maxwell was presumed to have fallen overboard from the vessel, which was cruising off the Canary Islands, and his naked body was subsequently recovered from the Atlantic Ocean.[.....] Murder was ruled out by the judge and, in effect, so was suicide. He was buried on the Mount of Olives in Jerusalem.

Vriendje van The Donald, next!

Well done, 47. The money has been wired to your account.

Nobody can stop what is comming. Q

Petje af. Deze man is een soort houdini, als je bedeckt dat Jeffrey Epstein na de eerste poging on suicide watch was. halturnerradioshow.com/index.php/en/n... "It is almost impossible to commit suicide in federal custody WHEN A PRISONER IS ON SUICIDE WATCH. THe prisoner is held NAKED, with only a suicide-proof garment to cover any part of the body, and is held in a cell with a unbreakable glass door, while either a Guard or another Prisoner sits on a chair outside that cell watching absolutely every move the prisoner inside makes. At any HINT of self-harm, the person outside calls for help and many people come running. The notion that Epstein was able to kill himself under such circumstances is utterly unimaginable.[ ... ]"
AG Bill Barr gaat deze zaak niet zomaar wegtekenen met een krabbeltje : "ruled suicide, Epstein case closed. " Die hele gevangenis gaat nu van binnen uit worden buiten gekeerd, om het lek te vinden.

"From the 1990s to mid-2000s, Epstein often socialized with the future President Donald Trump. Journalist Michael Wolff wrote that Trump, Epstein, and Tom Barrack were at the time like a “set of nightlife musketeers” on the social scene."
Dat maakt Trump nog geen pedo of sex-offender. Zo werkt dat niet.

Gevalletje suicided for reasons of national security lijkt me..

Look at it yourself.
youtu.be/aIuhwk61SRM

2 gunshots on the back of the head??! Dit stinkt naar een beerput.

The man who knew too much...

Je was me net voor.

Aanstaande president Trump STEUNT DE BOEREN. "We stand with the peaceful Dutch farmers who are bravely fighting for their freedom"