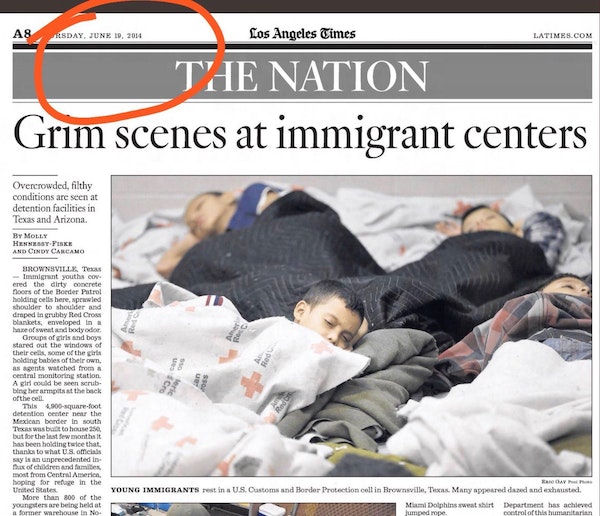 So interesting to see “Progressive” Democrat Congresswomen, who originally came from countries whose governments are a complete and total catastrophe, the worst, most corrupt and inept anywhere in the world (if they even have a functioning government at all), now loudly and viciously telling the people of the United States, the greatest and most powerful Nation on earth, how our government is to be run. Why don’t they go back and help fix the totally broken and crime infested places from which they came. Then come back and show us how it is done. These places need your help badly, you can’t leave fast enough. I’m sure that Nancy Pelosi would be very happy to quickly work out free travel arrangements! [Tweets] 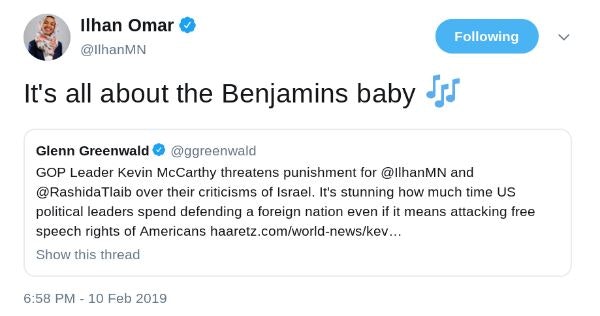 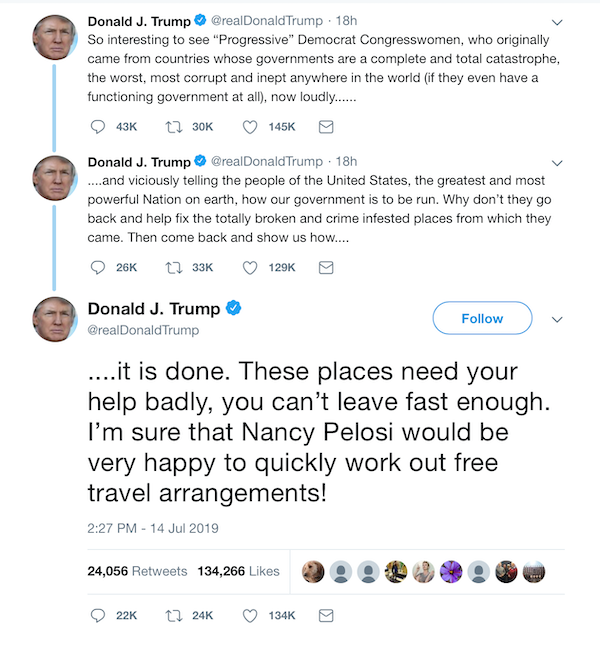 Like many of you, we’ve been watching with amazement and alarm as the leaders of the Democratic Party, day after day, attack the country they say they want to govern.

It’s remarkable, and a very new development. Just a few years ago, even the most liberal Democrats in Congress felt obligated to say patriotic things about America. They may not have felt it, but they said it. Now, it’s routine to hear Democratic presidential candidates question the basic legitimacy of the United States.

That should worry you. No country can survive being ruled by people who hate it. We deserve better. For all of our country’s flaws, this is still the best place in the world. Most immigrants know that and that is why they come here. It's also why we've always been glad to have them here.
But now, there are signs that some people who move here from abroad don't like this country at all. As we told you last night, one of those people now serves in our Congress.

Think about that for a minute. Our country rescued Ilhan Omar from the single poorest place on Earth. We didn't do it for the money, we did it because we are kind people. How did she respond to the remarkable gift we gave her?
She scolded us, called us names, showered us with contempt. It's infuriating. More than that, it is also ominous. The United States admits more immigrants more than any other country on Earth, more than a million every year. The Democratic Party demand we increase that by and admit far more. OK, Americans like immigrants, but immigrants have got to like us back.

That's the key, it's essential. Otherwise, the country falls apart.
We made that point last night. We will continue to make that point because it's true and it's important to say it out loud even if no one else is willing to.

Needless to say, the left went berserk.
They hate it when you say true things. Ilhan Omar and her allies in Congress immediately demanded that this show be pulled off the air. They didn't rebut what we said, any of our points, or even acknowledge them. They just try to silence us.

That is how they operate.
Of course, they called us racist. On one level that is amusing given how absurd the charges. This show, more than any other show on television, has taken an aggressive position in favor of color-blind equality and against racism, particularly the casual racism of the modern left.

We despise the current habit of judging people on the basis of their skin color. It's wrong. We see that virtually every night. Racist? Now, we are against racism adamantly. Omar consistently puts her own race at the center of the conversation, but to us, it's irrelevant.
Ayaan Hirsi Ali would, by the standard of identity politics, seem to have everything in common with Ilhan Omar. She was born in Somalia, moved to Kenya and eventually came to this country. Unlike Omar, she loves and cares about the United States. She believes this country is superior to the country she came from.

For saying that, the left despises her. Two Somali immigrants, one among the most impressive people in America. The other, among the least.
It's not about race. But, of course, Omar and her friends already know that. Nothing they say on the subject of race is sincere. It's all the hustle designed to get them what they want. Omar has made a career of denouncing anyone and anything in her way as racist. That would include virtually all of her political and personal opponents. It includes even inanimate objects like the border wall, that's racist. So was the Congress, so is the entire state of North Dakota, she once tweeted.

Omar may be from another country but she learned young that crying racism pays. The bigger question is, who taught her that? She didn't arrive from a Kenyan refugee camp announcing people as bigots for a political campaign. She wasn't always a professional victim. That is learned behavior.
Importantly, she learned it here. In some ways, the real villain in the Ilhan Omar story isn't Omar, it is a group of our fellow Americans. Our cultural gatekeepers who stoke the resentment of new arrivals and turn them into grievance mongers like Ilhan Omar. The left did that to her, and to us.

Omar was geboren in Somalie:
en.wikipedia.org/wiki/Ilhan_Omar

Een nieuw pareltje van de disruptor in chief:
When will the Radical Left Congresswomen apologize to our Country, the people of Israel and even to the Office of the President, for the foul language they have used, and the terrible things they have said. So many people are angry at them & their horrible & disgusting actions!
twitter.com/realDonaldTrump/status/11...

" AXIOS – Top Democrats are circulating a poll showing that one of the House’s most progressive members — Rep. Alexandria Ocasio-Cortez — has become a definitional face for the party with a crucial group of swing voters.

These Democrats are sounding the alarm that swing voters know and dislike socialism, warning it could cost them the House and the presidency. The poll is making the rounds of some of the most influential Democrats in America.

“If all voters hear about is AOC, it could put the [House] majority at risk,” said a top Democrat who is involved in 2020 congressional races. “[S]he’s getting all the news and defining everyone else’s races.”

Ocasio-Cortez was recognized by 74% of voters in the poll; 22% had a favorable view.

Rep. Ilhan Omar of Minnesota — another member of The Squad — was recognized by 53% of the voters; 9% (not a typo) had a favorable view.

“Socialism is toxic to these voters,” said the top Democrat.