One week before Koningsdag 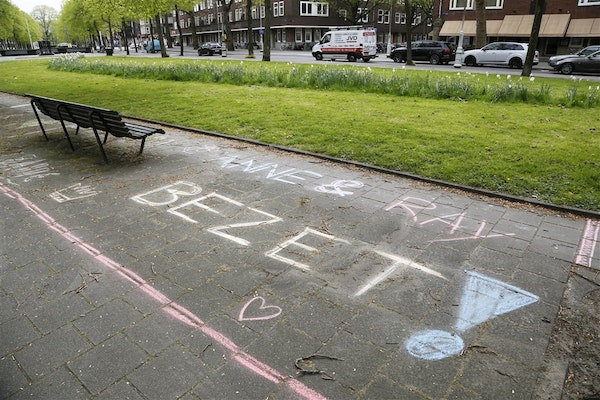 One week before Koningsdag (that is NOW, maybe you are too late already), you will go to the street with walkingchalk (stoepkrijt) and then you will kalk large plots of land. In these plots you will write: BEZET. This means: this place is mine! This is a legally binding contract between people. Every judge in every Dutch court will verdict in your favor if somebody else claims your spot as if it was his of hers. So, always remember: writing with walkingchalk means: this is mine now! (the Russians could have done that in your country, but they chose to do it the hard way) 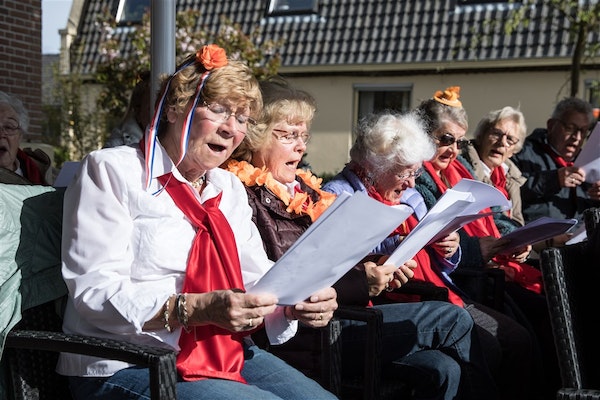 In the morning of Koningsdag, first we have the aubade. Then you will go with all the people from the village or the wijk and then you sing the Wilhelmus. And sometimes in the province, you will sing the province-volkslied as well. In Gelderland for example, you sing the Gelders Dreven, not the stupid Ons Gelderland. In Drenthe you sing the Drents volkslied written by Jan Uilenberg, and so on, and the mayor of the town does a speech but nobody really listens. 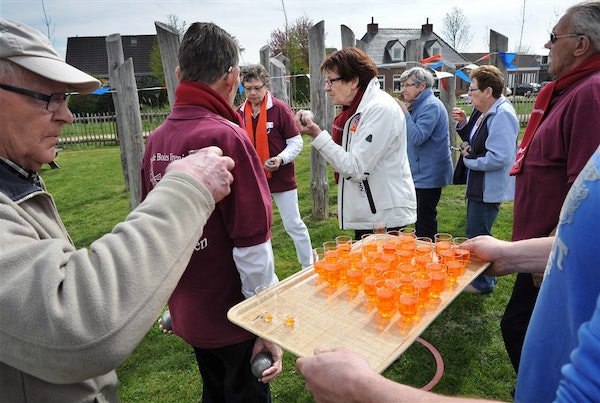 After the first beslommeringen from the aubade you will drink your first Oranjebitter of the day. This is not only good for your darmstelsel, but also makes you very like the roses. In Dutch that is: "Ik ben al lekker rozig." Most of the times, this will walk very out of the hand, en you will be drunk by noon. 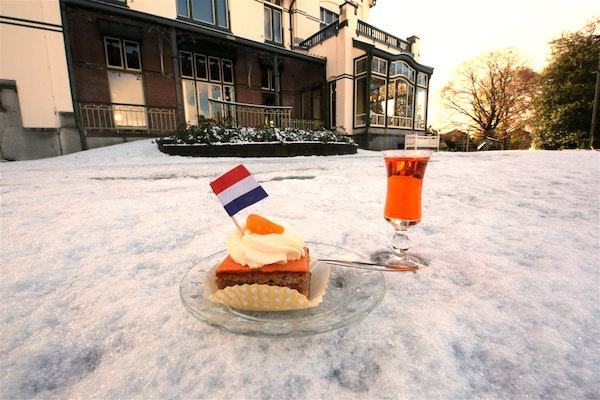 After your first Oranjebitter you will drink the second Oranjebitter. You will do that with a gebakje. Most of the time that is a tompouce, but sometimes it is also an other gebakje. They are very inconvenient to eat (if not: impossible) and usually it is your mother (or your mother in law) who has these gebakjes in the bikebag. "But they are from the bakery", is something they brag with. 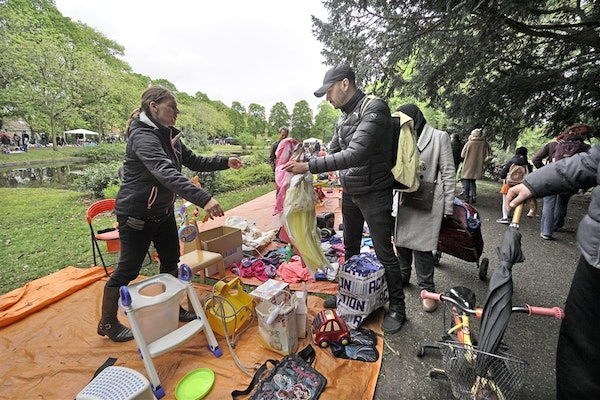 After you finished the gebakje you go with your makkers to the Vrijmarkt where lots of people sell shit. Old clothes from the zolder, but most of the time it are old lp's. But not lp's worth collecting, like Bob Dylan or so, but it is always junk. Like James Last, who we like to call James Overlast, or Nana Mouskouri, or the Urker Kinderkoor. Keep in mind that if you buy these shit-lp's, you hold in stand the system of people selling stupid junk. 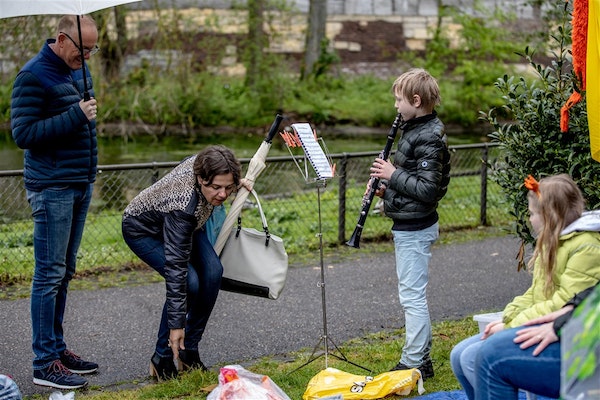 Also one important task at the Vrijmarkt is giving money to kids. They will come out of their rooms (bunkers, but without the air raids) with their  stupid little instruments to make shitty music. This pots and pans-gejank must be awarded with € 0,50 per person. So keep in mind that if you go to the Vrijmarkt, you must always carry a shitload of € 0,50 coins with you. If you award a kid with a trommel with  € 0,20 for instance, he will know that you don't appreciate his music and then he will be very sad, and you are a hater of children. 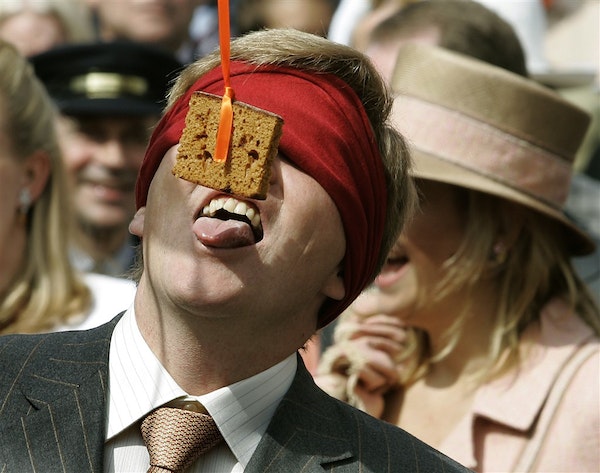 Then, if you still can stand on your legs from all the Oranjebitter, it is time to take a break. You put on NPO1 and then you will hear famous anchor Astrid Kersseboom host a televisionshow where they will watch how our King (we tax payers give him a lot of money for this) will do only onnozele stuff. For example. He will try to eat breakfastcook with his hands tied on his back. He will try to poop nails in a bottle. He will listen to children sing songs and watch how they perform tricks for him. Every year is the same, except for that one time Karst Tates spoiled everything. 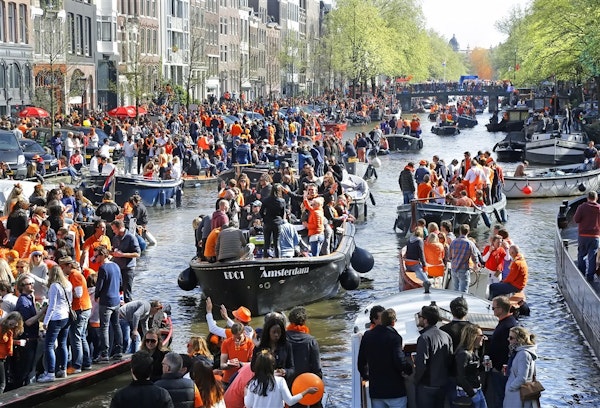 If you are not dressed up in orange already, this is the time to dress up like a big mandarijn. Maybe you bought some stuff at the Vrijmarkt as well. Now is the time to go and drink a lot of beers with your friends. If you are in Amsterdam, you are legally obligated to try to enter a boat, now dieselboats are still allowed because GroenLinks spoils everything. On the boat, there is no chance to go to the toilet, so make sure you don't have fear of piss in front of people. 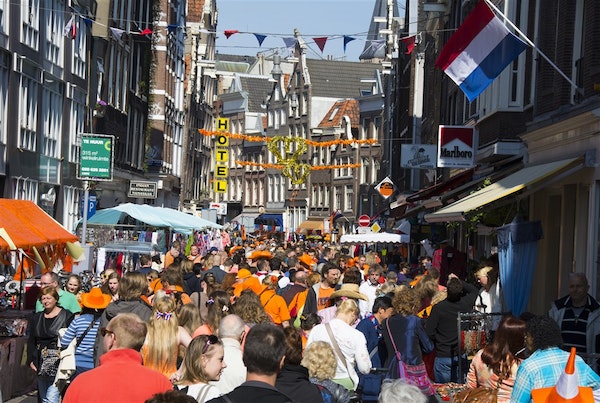 After you exit the boat, you go and drink beer on the streets. It is a national volkssport to say that you are actually a republican and that you don't like the Koningshuis that much. Well why are you all dressed up in orange then? Because you like the party! The second important thing is to flikker everything straight on the streets. Don't use the waste bins, they are full in no time, and Femke Halsema does nothing. Just throw your empty beercans, plastic cups and wine bottles on the ground. 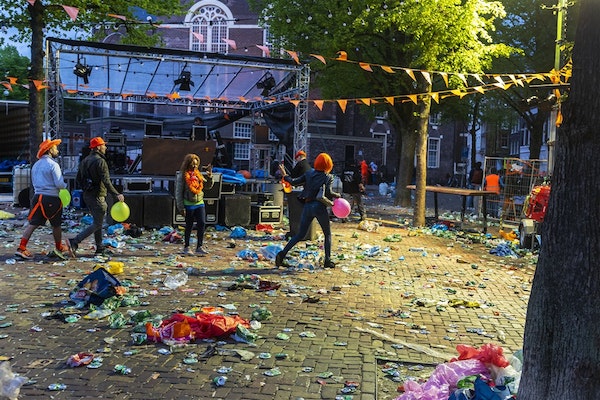 This is what the street should look like if you are finished with Koningsdag. It should look like Mariupol. Also notice all the small nitrous oxide cartridges on the floor. That is what Moroccan youth is selling to other kids for € 5: a balloon with lachgas. And by so, all of our youth becomes a bit more stupid every year. 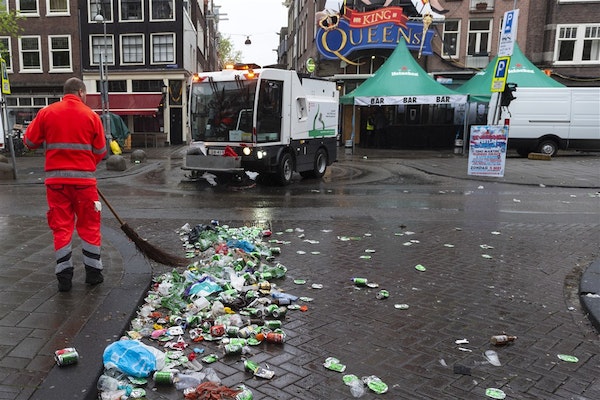 Go on your computer to the ANP Fotobank for pictures of cleaners who are cleaning the street for you. Also, you can go to the Twitterfeed of Saskia Noort, who is complaining about all the rubbish in the Vondelpark, which she owns. And then you survived your first Koningsdag! Congratulations.

Jes wie weer republic and wie kicked aut de Spanjols. But William da Silencekeeper was inplaceholder zo wie meet his familie kings wen Napoleon was dufietus.
What is there not to snap about?

kingsday is the birthday of the guy who drinks beer with poetin. poetin did likes more his wijf maxima.

Maybey he wanted to be aardig to get some tips how to dispose yourself from opposition with airplanes.

And your girlfriend moet waiten 29 minute in de Blaffende Vis to take a pee, while you do it in the plastieken container or the gracht.

Cookhapping, is that well healty for the children?

And then our King is going to throw out a toilet bowl as far as he can. Nope, dat kan ik niet uitleggen.

This year there is verrie less shit on the freemarkt because most of all this useless shit is already sent to your cuntrie to help you.

Our Queen is from Argentina. Nothing wrong with your women. It's still South America. But the excellent genetic stock from Ukrain: is it because even you could not save The Oranjes? Ik vraag dat voor een goede vriend met een prima inborst (het soort waarbij je tieten binnenstebuiten groeien): corn fed country pussy. In het land van Tjeerd de Groot.

And my dear Ukrainian refugees 5 days later we celebrate Liberation Day.
We are all aware your country gets invaded by uncivilized Russian barbarians but we don't mind the 5th of May.
We get drunk again with loud music, urinate everywhere and make tje same dirty mess like on King's Day.
You Svetlana and Pavel might think it is a terrible shithole in Marioupol but wait for the 27th of April and the 5th of May!

Willem Alexander is the putin of the Netherlands, only he has no power but he takes the money.

But his boat is nicer.

Becouse he shits een berg. One volle, take the volgende.

"Most of the times, this will walk very out of the hand, en you will be drunk by noon."