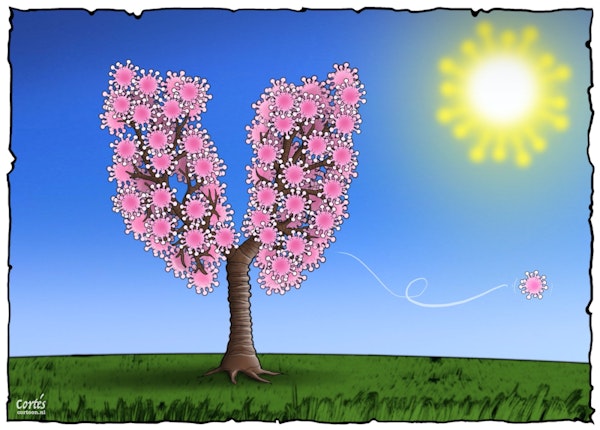 Wow... The godfather 4 in the making in dat filmpje.

"Fear is the currency of control"

99 per cent of coronavirus deaths in Italy are patients with existing medical problems, a study by the country's health service has found.

Research into 355 deaths found that only three of the victims, 0.8 per cent, had been clear of illnesses before they were infected.

Nearly half of them - 48.5 per cent - already had three or even more health conditions before they were diagnosed with Covid-19.

A small study of 12 patients discharged from hospital showed that two or three had reduced lung function. However, it is too early to confirm any long-term effects." We gaan het meemaken.

@Binnenbaan | 23-03-20 | 16:14: Originele stuk is door Twitter 'gebanned' en daarom op zero-edge terecht gekomen. De draad met kritiek waar jij naar verwijst (door CT-Bergstrom) vind ik ronduit zwak en zelfs hautain of zoals iemand dat mooi verwoordde: "This is just an appeal to authority. I’m interested in hearing the devasting critique of this piece promised. All I’ve been given so far is a admonition that the experts somehow know better. Perhaps they do, but it’s going to require an explanation rather than a logical fallacy"

Hope is not a strategy.

Burgermeesteres Femke van Am*dam: ' mensen opsluiten in huizen is een gruwelijke maatregel '
Burgermeester in Italia: 'where the fuck are you all going, you and your dogs '

@letopuwzaak | 23-03-20 | 15:01: Ik kreeg vanmorgen onderstaande doorgestuurd en dacht eerst dat het weer zo'n onzinverhaal was, maar als je er op zoekt, dan is er veel over te vinden.
A new term to remember: Viral Load.
Awareness could save lives. This is from an expat group I belong to here in France, where we have been ahead of US in terms of the pandemic, but they may surpass us because of Viral Load.

I work in the NHS but live in Quillan. To help understand social distancing this came from an ITU consultant anaesthetist colleague and my advanced practice mentor. I hope it helps and please pass the info on.

Why do we need to shut places where people group?

There will be a lot about this. Why is it important?

With this virus, the amount of virus in your blood at first infection directly relates to the severity of the illness you will suffer. This isn’t unusual - HIV management is all about reducing viral load to keep people alive longer. BUT it’s very important in COVID-19.

So if you are in, say, a pub or religious building or entertainment venue with 200 people and a large number don’t have symptoms but are shedding, you are breathing in lots of droplets per minute and absorbing a high load of the virus. In a crowded space. They become ill over the next 48 hours. You then three days later wonder why you can’t breathe and end up in hospital. You’d decided because you were young and healthy it wasn’t going to be a problem. Wrong.

Fortunately but unfortunately because the elderly are isolating quite well, the initial UK data suggests that all age groups above 20 are almost equally represented in ITUs in England. Most of the cases are in London but the wave is moving outwards.

This means that being under 60 and fit and well doesn’t seem to be as protective as we thought. Why? Viral load.

This may be skewed simply by the fact that too many Londoners didn’t do as asked and congregated in large groups in confined spaces and got a large initial viral load. They then went home and infected their wider families. Which is why, as London is overwhelmed, we need to shut everything down to save the rest of the UK. We are a week at most behind London.

Our sympathies go out to the families affected in London and the critical care teams battling right now to save as many as they can.

If I sit with one person and catch this virus, I get a small viral load. My immune system will start to fight it and by the time the virus starts replicating, I’m ready to kill it.

No medicines will help this process meaningfully hence there is no “cure” for this virus. All we can do is support you with a ventilator and hope your immune system can catch up fast enough.

If I sit in the same room with six people, all shedding I get six times the initial dose. The rise in viral load is faster than my immune system can cope with and it is overrun. I then become critically ill and need me (or someone of my specialty) to fix it instead of just being at home and being ok in the end.

THIS BIT IS IMPORTANT:

If you are a large family group, remember that by being ill and in the same room, you will make each other ill or “more ill”. If you get sick, isolate just yourself to one room and stay there. Don’t all sit in one room coughing. You will increase the viral load for all of you, reducing your survival rate.

A family of six people may produce double the droplets of a family of three in the same space. Maths is important.

If one of you is symptomatic, assume you are all shedding and make sure you keep some space.

Parents are getting it from their kids because no one is going to stop comforting their child (nor should they) so the parent gets a big hit as well as the child. I don’t think that can be helped.

It could save your life or your child’s.

it’s up to you now. We are preparing for the worst but we are hoping for the best from you. Please help us to help you. Stay home and take this seriously now before we need the army on the streets to remind you. Yes I’m serious.

The calm before the storm.