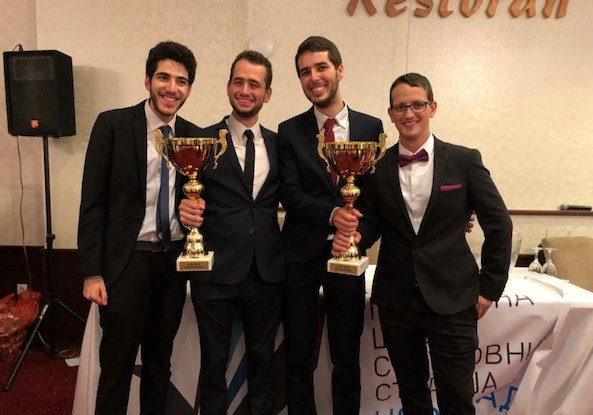 "This team has decided, ironically, that in the one global arena that promotes freedom of speech, critical thinking and logic, the best way to protest is by declining to engage. This is unprecedented, as in previous years Qatari teams have debated Israeli teams at WUDC, other countries who do not recognize Israel as a state debate Israel (in instances like Malaysia, Plaestine and the Emirates), when Qatar hosted world's schools championship, the Israeli schoolies were given a special permission to enter the country.

The most upsetting part of this was the lack of support by the European community: during the council at least 9 representatives have agreed that nationality is an identity which is legitimate to boycott. Imagine a team declining to debate women, debaters of colour, or LGBTQ debaters: the outrage would have been massive. "

Nationality is an identity which is legitimate to boycot.
Dussss alle dubbel paspoortiers......
Choose it or loose it!

Israel builds for Nobel Prizes, Arabs build for suicide bombers.
.
The new this week that two Israeli scientists, in addition to an American, won the Nobel Prize in chemistry, should be read with interest in the Arab world. This win says a lot about the state of affairs in the Middle East.
While Israel builds its future with Nobel laureates, the Arab world fills its future with suicide bombers.
Ever since the inception of the State of Israel, Arabs have this romantic notion that through wars and revenge we can return to our past glory.
Of course, they don’t tell us which past the are referring to.
.
Was it when we were governed by the Ottoman Empire or by England or France? Or was it more like 1.300 years ago when spears ruled the battleground?
.
Ever since 1967, Arabs from all countries –but especially Syria, Jordan, Lebanon and Egypt—have lived this fantasy that we can throw the Israelis (in)to the sea.
With the 1973 near-win against Israel, Arabs concluded that one more loss is not reason enough to stop and think.
One more loss, with so many lives lost on both sides, is not enough for us to understand that the continued struggle is destroying us from within.
Even after Anwar Sadat came to understand the value of peace and co-existence, it seemed that more and more of our energies were diverted toward destruction.
.
The downfall if the Soviet Union, the .long-time ally of the Arab world, seemed to spur us to seek justice with the barrel of a gun rather than through pragmatic understanding.
.
The Oslo accords produced a willing Israel and exposed fraudulent Palestinians. Again we watched as Arab leaders mounted a campaign of deceit to divert our attention away from our own oppression.
We, the obedient Arab sheep, followed. We carried banners, objected, revolted and in the end, we c created a new cadre of school children with strong arms to throw stones but without the education and discipline and (no) brains to produce Nobel prizes.
.
Ever since the Intifada, a term that truly spurns our sense of justice, we have achieved the lowest point of our self-esteem. Arab children that throw stones seem to feel an invisible power that is not available to the children of the State of Israel.
.
That power to revolt consequently pre-disposes to a low self-esteem, which inevitable helps to build the mentality of a suicide bomber.
Suicide bomber feel nothing, understand little and cannot see the future.
They go on automatic pilot with the brain functioning as a guiding tool to self-destruct literally, as a person and against the society that developed them. Suicide bombers represent the lowest of self-esteem as people of Arab descent.
.
We are in Intifada, but it is one that is seen through the eyes of the Israeli Nobel laureates.
We, as people of the Middle East, are dying and we cannot feel it. We have reached the bottom and we don’t even know it.
Because of oppressive regimes that give us no chance to think for ourselves, we have no hope, no future and certainly no Nobel prizes in science awaiting us.
.
What very few people know is that an Intifada is also attributed to the last movement by a human body upon death.
Could that be this understanding of Intifada that is the true symbol of a struggle that should have ended long ago? All Arabs are in an Intifada, still moving yet not truly alive as citizens of the world.
.
Every time the Syrian Ba’athists call for armed resistance, secretly support groups like Hezbollah and Hamas, and propagandize Arab unity, we fall further into oblivion.
The funny thing is that very few Arabs care to understand why we do not have Nobel laureates.
They blame it on Imperialism and Zionism. In their minds, absent these two forces, we could be raking in those Nobel prizes.
.
So while Israel survives Intifadas, wars, hate and oppressive Arab rulers, we, the Arab people, must wake up.
If we pursue the same politics that drove us to the lowest point in our history (Asr al-Inhitat or Era of Despair as opposed to Asr al-Jahyliah of Era of Ignorance that preceded Prophet Mohammed), only we lose.
.
If we listen to our rulers, we will always be kneeling on the sideline watching Nobel prize winners produced by the Middle East – but not by us or for us.
.
2004, oct 21st ,
Farid Chadry, President of the Reform Party Of Syria.

Apartheid is dan nog for lack of a better word want in Qatar ben je of slaaf (kaffir) of moslim.