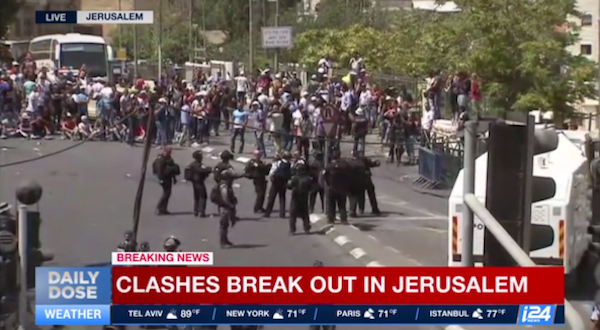 The Israeli Ambassador at the U.N. began, "Ladies and gentlemen before I commence with my speech, I want to relay an old Passover story.

"When Moses was leading the Jews out of Egypt toward the Promised Land, he had to go through the nearly endless Sinai desert.

"When they reached the Promised Land, the people had become very thirsty and needed water. So Moses struck the side of a mountain with his staff and a pond appeared with crystal clean, cool water. The people rejoiced and drank to their hearts' content.

"Moses put down his staff and went to a solitary corner of the pond to drink, and meditate in prayer. But once Moses returned, he found that his staff had been stolen.

"I have reason to believe ladies and gentlemen that the Palestinians stole the staff of our great Prophet Moses.'"

The Palestinian delegate to the UN, hearing this accusation, jumps from his seat and screams out, "This is a travesty. It is widely known that there were no such thing as 'Palestinians' at that time!"

"And with that in mind," said the Israeli Ambassador, "let me now begin my speech."