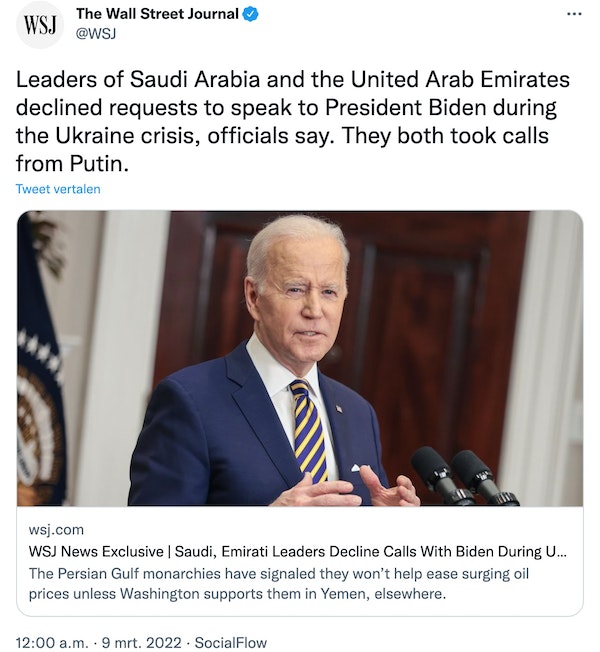 Bevreemdend berichtje zo in het midden van een energie- en goederencrisis. De Wall Street Journal schrijft dat: "Saudi Crown Prince Mohammed bin Salman and the U.A.E.’s Sheikh Mohammed bin Zayed al Nahyan both declined U.S. requests to speak to Mr. Biden in recent weeks. (...) There was some expectation of a phone call, but it didn’t happen,” said a U.S. official of the planned discussion between the Saudi Prince Mohammed and Mr. Biden. “It was part of turning on the spigot [of Saudi oil].”"

CLAY: Almost two years to the day. Putin has invaded in Ukraine. Under Obama, Putin invaded as well. All the talk about your relationship with Vladimir Putin, and he certainly didn’t try that with you. Why is he doing it to Biden? What do you think of Biden’s bluster, that tweet that has not been reflected in the reality on the ground?

I knew Putin very well. I got along with him great. He liked me. I liked him. I mean, you know, he’s a tough cookie, got a lot of the great charm and a lot of pride. But the way he — and he loves his country, you know? He loves his country. He’s acting a little differently I think now.

..."I think he sees this opportunity. I knew that he always wanted Ukraine. I used to talk to him about it. I said, “You can’t do it. You’re not gonna do it.” But I could see that he wanted it. I used to ask him. We used to talk about it at length. I think nobody probably knows him better in terms of the discussions that we have or that we’re having this morning. So, I knew him very well. I got to know him. I got to know President Xi. By the way, China is gonna be next. You know, China is gonna —

PRESIDENT TRUMP: Oh, absolutely. Not with me, they wouldn’t have.

CLAY: But you think with Biden they’ll try him?

PRESIDENT TRUMP: Oh, yeah. They’re waiting ’til after the Olympics. Now the Olympics ended, and look at your stopwatch, right? No, he wants that just like… It’s almost like twin sisters right here because you have one that wants Taiwan, I think, equally badly. Somebody said, “Who wants it more?” I think probably equally badly. But, no, Putin would have never done it, and Xi would have never done it. And also, North Korea has not acted up for four years.

Wsl dezelfde onzin teksten uitgeslagen als hij nu doet.
"Putin is a genius, very savvy" of
"The US should paint Chinese flags on our planes and then use those planes to bomb Russia. And then we say China did it."
Knettergek en nul moreel besef.

" Fearing that Pres. Saddam Hussein of Iraq might invade Saudi Arabia next (despite Saudi assistance to Iraq during the Iran-Iraq War), the Saudis, breaking with tradition, invited the United States and other countries to send troops to protect the kingdom."

Kutsaoudi‘s:
- Brutal bombardment campaign'
The revelations raise further questions about the extent of British support for the Saudi air force which faces accusations of war crimes over the alleged targeting of civilian sites including schools and hospitals in Yemen where a Saudi-led coalition has been fighting Houthi rebels since 2015.

At least 18,500 civilians have been killed in more than 20,000 coalition air strikes, of which about a third have struck non-military sites, according to the Yemen Data Project.-