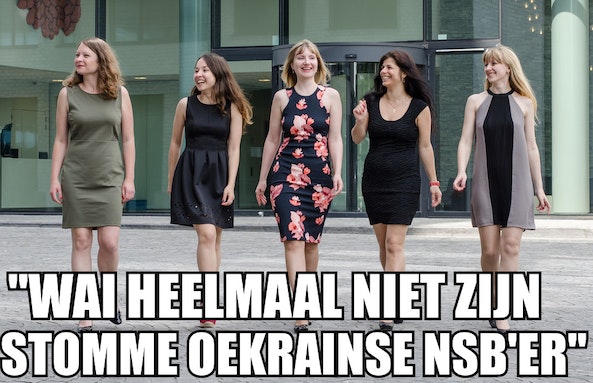 EU is invasieve vreemde mogendheid.
"We don’t have a great war in our generation, or a great depression"
Denk nogmaals.
EUxit

The actions of the EU presently using and financing are already resulting in censorship. An example of these actions is EU vs Disinfo. Stop this!

This whole questionnaire seems geared towards making state/EU censorship possible and palatable for the European citizen. No, it won't be for me!

Disinformation is at all times and is used by all countries. Example: American news about USSR weapons capability during Cold War period was highly exaggerated. We know now this being a fact.

Now the EU + the USA need again an enemy an present Russia is a target. But there you have a problem, because most actions of NATO, massing troops on Russian borders are seens as an agressive measure by the Russians. So tell me what facts are here as USA/NATO/EU tell us this to must prevent a Russian attack. The Russians see these NATO troops concentration as aggression.

Some of the questions here are very hard to answer because we the general public are most of the time unaware of the secret reasons why politicians make certain decisions. Example: General Wesley Clark stated that the USA was planning many years ago already wars in the Middle East and North Africa. I don't have to point out the videos on YouTube, you know them, don't you. Is he lying? If so why? Is he stating the truth? Then it is horrible because we are told that all these wars now playing out were about citizens crying out for democracy.

By the way, what are facts? When I state that the USA is a terrorist country. You EU-politicians will deny that in public. I have only to point to all the murders/assassinations of statesmen ( Allende, as only one example) and the invasions of other countries. Well, it all started with thekilling of the Indians and a prime example is the condoning of the deposition of the queen of Hawaii by some businessmen (1893).

Did I mention the British Paulet Affair of 1843? No, but now I have. Lord George Paulet thought that he had every right to shell and occupy Hawaii. That was for him a fact. Not for King Kamehameha III, of course, him being the monarch of the independent Kingdom of Hawaii. (The Netherlands then had even official relations with that country.)

You remember Iraq? How we, the people's of the earth, were lied to in an incredible way! Or do you still believe that Saddam Hussein had WMD? If so you are more crooked then I can imagine.

Take Syria. Those bad Russians got into the war there. All of a sudden? No of course not, if you know how good the relationship between the USSR and Syria was, already since WWII, you can only wonder why the Russians didn't mingle in the fighting earlier.

What is the war in Syria really about? Pipelines? LPG, oil? Most probably about these commodites when compared to the cry for democracy. Regime change again, like many times advocated and effectuated by the USA.

Victoria Nuland dealing out orders by telephone who should rule in Ukraine?

You know when "facts" can become real facts? That is the opening of governments archives after many many years. Only then we can find out what facts are facts and even then we do not know what information has been destroyed at the time.
Sometimes "facts" will always be opinions, unfortunately.

Yes, I know you will most probably consider my contributions as coming from a citizen who is totally poisoned by fake news from Russia, but I do not care.

You must understand that I am opposed to any sort of censorship, any sort of press bridle, any sort of measures that will take away our right to express our views. I am in favor of the most free speech that you can imagine, only views that advocate or incite to violence are to be seriously analyzed and may be prosecuted.

If a cartoonist is publishing a caricature of Mohammed then ten police officers should NOT in the night arrest him, like it happened with the cartoonist Gregorius Nekschot in the Netherlands! This is an example of the rotten mentality of the then politicians in charge of the Netherlands, that generate this climate of repression.

What the EU tries to camouflage as real news or combat fake news by issuing this questionnaire is just censorship in the making.

If the EU is going to cooperate with the likes of Google and FaceBook I will view this as proto-fascist. Do I make myself clear? States and international corporations colluding against citizens.

I do not use or hardly use at all social media. FaceBook, Google and the like are of no interest to me. I am on FaceBook as I had a row with Frans Timmermans because he called me a Stalinist. The idiot, I am an anarchist.

“Freedom is never more than one generation away from extinction. We didn’t pass it to our children in the bloodstream. It must be fought for, protected, and handed on for them to do the same. “ ~ Ronald Reagan

Precies. GS gaat binnenkort verboden worden... hopelijk heeft u al een plan B.
The sign is on the wall...

"an emotional article with no place for an alternative point of view" Zoiets noemen we opinie. Mag dat nu ook al niet meer?

Omarmt. At your service! *klak*