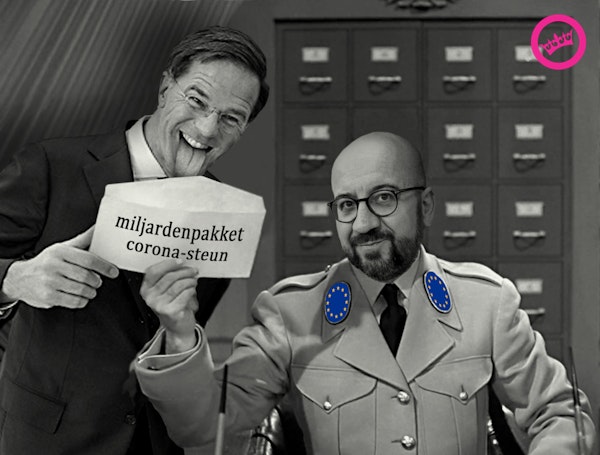 "EU finance ministers reached a deal after Italy and NL backed down under pressure from France and Germany. It involves the ESM bailout fund, European Investment Bank, & a Commission employment support scheme. A further recovery fund will be discussed by EU leaders. No eurobonds." 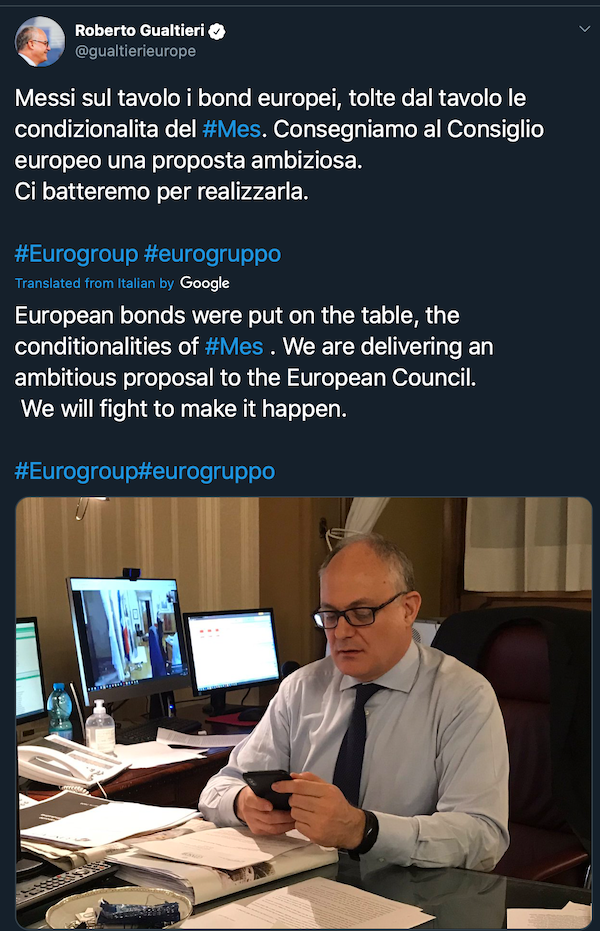 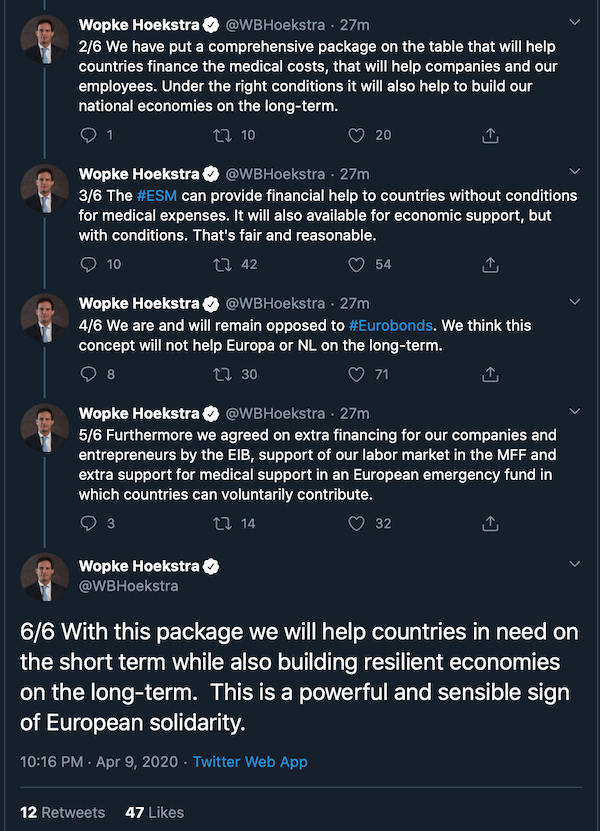 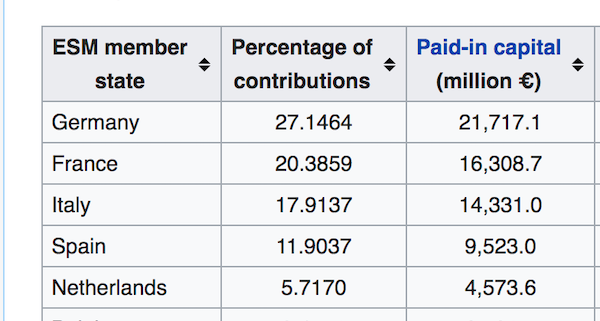 Europe’s nations should be guided towards the superstate without their people understanding what is happening. This can be accomplished by successive steps, each disguised as having an economic purpose, but which will eventually and irreversibly lead to federation.

In the UK we do not have a diagnostic sector as in Germany. We have to start from scratch. The Dutch d66 blocked the UK in it's growth.

"The agreement was reached after EU powerhouse Germany, as well as France, put their feet down to end opposition from the Netherlands over attaching economic conditions to emergency credit for governments weathering the impacts of the pandemic, and offered Italy assurances that the bloc would show solidarity."

"German Chancellor Angela Merkel earlier in the day talked on the phone with Conte and Dutch Prime Minister Mark Rutte, paving the way for the eventual agreement, which now awaits approval from the bloc’s 27 national leaders in the coming days."

Plus de mafia in Italië

Had 10CC toch gelijk, Life is a Minestrone.

It's game over man.

Tell me the tric!

Italy is the world’s third-largest holder of gold reserves, behind the United States and Germany, with 2,451.8 tonnes as of last year, according to the World Gold Council.

tradingeconomics.com/netherlands/gold...
Gold Reserves in Netherlands remained unchanged at 612.45 Tonnes in the fourth quarter of 2019.

Had U anders verwacht??? NEXIT please...

Hoe Italië door communisten naar de klote is geholpen en het Chinese virus binnenhaalde. Lange lees bij uitzondering in Engels.
Giacomino Nicolazzo is one of Italy’s most beloved writers. Born and raised in Central Pennsylvania, he lives in a small village in Lombardy where he writes his books.

Most towns here in Italy, from the upper reaches of the Alps to the ancient shores of Sicilia and Sardenia, while not deserted, are closer to being ghost towns than the bustling centers of tourism, business and daily life they were just a few weeks ago.

Stores and shops have been shuttered. Restaurants and coffee shops no longer serve customers. Schools, universities, sporting arenas…even our museums and theaters…all closed. Even the Vatican City has closed its gates and armed patrols monitor the 20 foot tall walls that protect it!

Streets and roads are now empty for as far as the eye can see. Normally they would be filled with crazed Italian drivers in tiny cars and scooters (the ones that sound like demonic insects) darting here and there, reaching the limits of centrifugal force on our roundabouts. In the piazze of our towns and cities, there are now officially more pigeons than people.

Sixty million of us are in lockdown. It is like a war zone here. We are being held prisoner in our own homes by an unseen enemy that sneaked in unnoticed by most of us. As you will read in just a few more minutes, there were those who knew something like this was coming . . or at least they should have.

So who is to blame? With all this craziness swirling like a whirlpool at our feet, I just had to find the blame answer. And so I have spent my free time (of which I have a lot in these days) digging and researching. I was literally shocked to discover how this has come to be.

I am not going to bore you with talk of Patient ‘0’ who spread it to Patient ‘1’ and how mathematics efficiently explains the rapid expansion of infection. No, I am going to tell you how (as I see it) the virus came to Italy.

It has everything to do with communists. Allow me to explain.

Beginning in about 2014, Matteo Renzi, the imbecile ex-mayor of Firenze (Florence) acting as the leader of the Partito Democratico (synonymous with the Italian Communist party), somehow managed to get himself elected as Italy’s Prime Minister. To give you a proper frame of reference, Matteo Renzi was so far left, he would make Barack Obama look like Barry Goldwater.

At the same time that Renzi was leading Italy into oblivion, strange things were happening in Italy’s economy. Banks were failing, but not closing. Retirement ages were being extended. For some reason the pension funds were dwindling or disappearing. The national sales tax we call IVA (Value Added Tax) rose from 18% to 20%, then to 21% and again to 22%.

And in the midst of all this financial chicanery, the Chinese began furiously buying up Italian real estate and businesses in the North.

Now, the reason I mention Renzi and the Chinese together is that strange things were also going on between the governments of Italy and China. A blind eye was being turned to the way the Chinese were buying businesses in the financial, telecommunication, industrial, and fashion sectors of Italy’s economy, all of which take place in Milano.

To be brief, China was getting away with purchases and acquisitions in violation of Italian law and EU Trade Agreements with the US and the UK - and no one in either of those countries (not Obama in the US or Cameron in the UK) said a thing in their country’s defense. As a matter of fact, much of it was hidden from the public in all three countries.

In 2014, China infused the Italian economy with €5 billion through purchases of companies costing less than €100 million each. By the time Renzi left office (in disgrace) in 2016, Chinese acquisitions had exceeded €52 billion. When the dust settled, China owned more than 300 companies, representing 27% of the major Italian corporations.

The Bank of China now owns five major banks in Italy, all of which had been secretly (and illegally) propped up by Renzi using pilfered pension funds! Soon after, the China Milano Equity Exchange was opened and much of Italy’s wealth was being funneled back to the Chinese mainland.

Chinese state entities own Italy’s major telecommunication corporation (Telecom) as well as its major utilities (ENI and ENEL). Upon entry into the telecommunication market, Huawei established a facility in Segrate, a suburb of Milano. It launched is first research center there and worked on the study of microwaves which has resulted in the possibly-dangerous technology we call 5G.

China also now owns controlling interest in Fiat-Chrysler, Prysmian and Terna. You will be surprised to know that when you put a set of Pirelli tires on your car, the profits are going to China. Yep, the Chinese colossus of ChemChina, a chemical industry titan, bought that company, too!

Last but not least is Ferretti yachts, the most prestigious yacht builder in Europe. Incredibly, it is no longer owned by the Ferretti family.

But the sector in which Chinese companies invested most was Italy’s profitable fashion industry. The Pinco Pallino, Miss Sixty, Sergio Tacchini, Roberta di Camerino and Mariella Burani brands have been acquired by 100%.

Designer Salvatore Ferragamo sold 16% and Caruso sold 35%. The most famous case is Krizia, purchased in 2014 by Shenzhen Marisfrolg Fashion Company, one of the leaders of high-priced, ready-to-wear fashions in Asia.

Throughout all of these purchases and acquisitions, Renzi’s government afforded the Chinese unrestricted and unfettered access to Italy and its financial markets, many coming through without customs inspections.

Quite literally, tens of thousands of Chinese came in through Milano (illegally) and went back out carrying money, technology, and corporate secrets.

Thousands more were allowed to enter and disappeared into shadows of Milano and other manufacturing cities of Lombardy, only to surface in illegal sewing shops, producing knock-off designer clothes and slapping ‘Made In Italy’ labels on them. All with the tacit approval of the Renzi government.

It was not until there was a change in the governing party in Italy that the sweatshops and the illegal entry and departure of Chinese nationals was stopped. Matteo Salvini, representing the Lega Nord party, closed Italy’s ports to immigrants and systematically began disassembling the sweatshops and deporting those in Italy illegally.

But his rise to power was short-lived. Italy is a communist country. Socialism is in the national DNA. Ways were found to remove Salvini, after which the communist party, under the direction of Giuseppe Conte, reopened the ports. Immediately, thousands of unvetted,

undocumented refugees from the Middle East and East Africa began pouring in again.

Access was again provided to the Chinese, under the old terms, and as a consequence thousands of Chinese, the majority from Wuhan, began arriving in Milano.

In December of last year, the first inklings of a coronavirus were noticed in Lombardy - in the Chinese neighborhoods. There is no doubt amongst senior medical officials that the virus was brought here from China.

By the end of January 2020 cases were being reported left and right. By mid-February the virus was beginning to seriously overload the Lombardy hospitals and medical clinics. They are now in a state of collapse.

The Far-Left politicians sold out and betrayed the Italian people with open border policies and social justice programs. One of the reasons the health care system collapsed so quickly is because the Renzi government (and now continued under the Conte government) redirected funds meant to sustain the medical system, to pay for the tens of thousands of immigrants brought in to Italy against the will of the Italian people.

If you remember the horrible earthquake that decimated the villages around Amatricia, in the mountains east of Rome in 2015, you would also remember how the world responded by sending millions of dollars to help those affected.

But there is a law in Italy that prevents private donations to charitable Italian organizations. All money and donations received must be turned over to a government agency, who in turn is to appropriate the funds as needed. But that agency is corrupt, just as are all the others.

Most of the money never reached a single victim in the mountains. The Renzi government redirected the vast majority of those funds to pay for the growing immigrant and refugee costs.

As the economy worsened under the burden of illegal immigration, compounded by gross government spending and incompetence, unemployment rose quickly…especially among young people. The unemployment rate for men and women under age 35 is close to 40%.

So more money was diverted from the health care system and used to pay what is known here as guaranteed income. Whether you work or not you are paid here, especially if you belong to the PD! The government simply raises taxes on those who do work.

Let me give you a quick example of the height of insanity to which Italian taxation has risen. If you live in a building that has a balcony or balconies - and any of those balconies cast a shadow on the ground, you must pay a public shadow tax! I will say no more!

The point I am trying to make here is that not only did the Chinese bring the virus to Italy (and the rest of the world) it was far-Left politics and policies that facilitated it.

With Covid-19 it is easy to stay healthy, but impossible to stay wealthy!

Noord Holland is in mijn kennissenkring in elk geval nul.

Misschien is Joop iets voor u?

What. The. Actual. Fuck.

Dat u het niet begrijpt, zegt meer over u dan de inhoud van hetgeen dat is afgesproken:"EU finance ministers reached a deal after Italy and NL backed down under pressure from France and Germany. It involves the ESM bailout fund, European Investment Bank, & a Commission employment support scheme. A further recovery fund will be discussed by EU leaders. No eurobonds."
.
Hoe moeilijk is dat te begrijpen voor u of moet ik het nog even vertalen in het Nederlands?

Toch nog even over Hoekstra in Thialf