Lindsey Walsh: "I'm in no way condoning violence. However, having witnessed the 15 minute build up prior to this head butt, I can confirm he deserved it. What you are seeing is the head butt with no context behind it. But that guy got on the train spoiling for a fight. He had a punch up with an innocent commuter and was abusive to everyone on the carriage. Again, I'm not condoning violence but the guy who gave the head butt was a hero."

Del Scott-Lewis: "When against the wall, he started saying 'I'll kill you, I'm from Afghanistan, I'll kill you, I'll stab you'. I was on the phone to 999 and saying 'we need urgent help. I put the phone down and went to restrain the guy. Before the headbutt comes, he was talking about killing me. Then the word 'stab' came up. We saw no knife, but he made the threat to stab us. When he made the threat, no one had a baton - so we headbutted him. If someone threatens to stab you, and you've got no baton on you, the only course available was to shut him up."

Justina Ivanovaite: "This guy was harassing and trying to provoke fights the entire journey until he was escorted off. Everyone was ignoring him as it was a busy train and no one wanted any trouble. The final straw was when he jumped in between two seats and was practically sitting on a person's head. The passenger simply told him to get down and the guy started laughing and started using horrible language towards him and a lot of other passengers on the train.He then started pushing the passenger and a fight broke out, which was quickly dispersed. After many more horrible and inappropriate comments later another passenger cornered him into the door so he would stop harassing people and said for him to get off the next stop - Upminster. He then started pushing him and insulting him, which resulted in the final headbutt. When he was escorted off the train he still continued to make comments and insults." 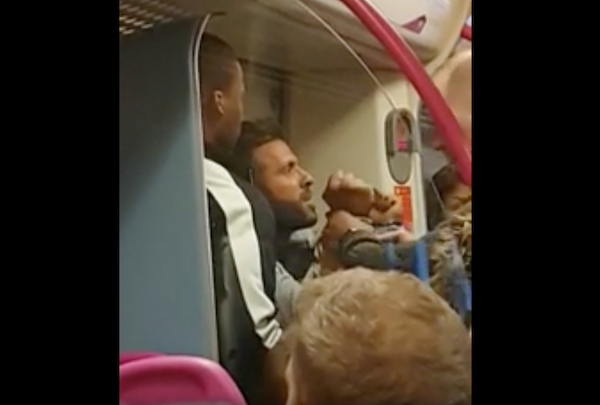 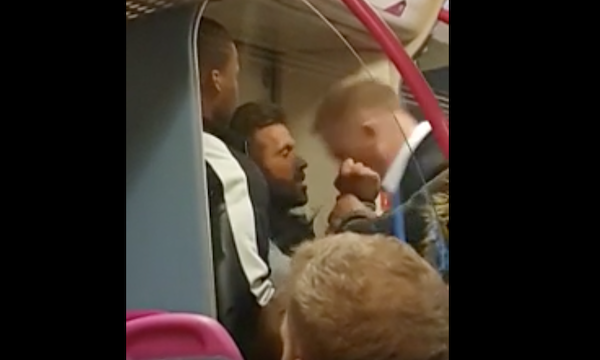 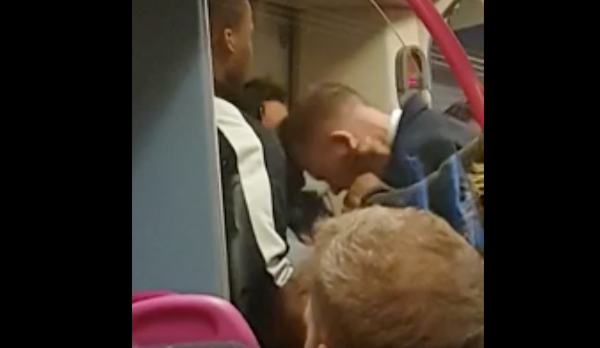 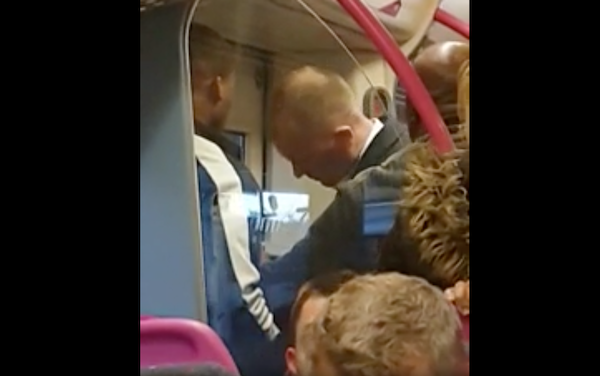 he looks a little to closed , vision is bad !

A suited man who was filmed headbutting a commuter following a row on a train was an off-duty police officer.

A spokesman said the Met’s Directorate of Professional Standards reviewed the video and are ‘satisfied that there is no indication that the officer committed a criminal offence, nor that he behaved in a manner that would justify disciplinary proceedings’.

U moet de Shariaraad in.

A Glasgow kiss in London. Ghehehe.

A conductor conducts and handles, as cool as possible.
PLUS ONE!

Je was me net voor!

Was zijn naam Butthead of Headbutt?

His name is Butthead and he got a headbutt .