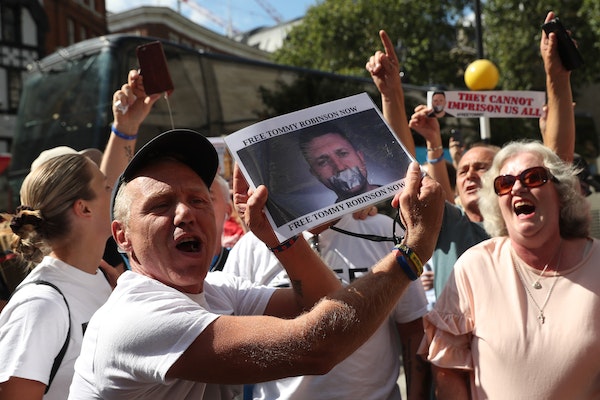 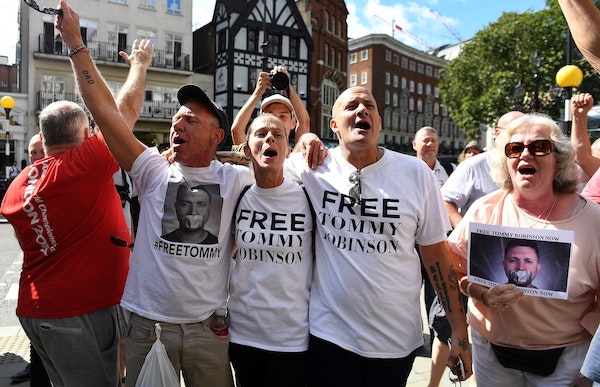 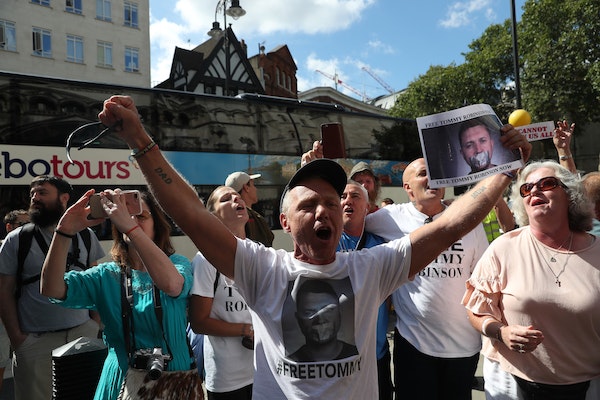 "The EDL was founded in London in 2009; Tommy Robinson, a former member of the British National Party (BNP), soon became its de facto leader. It coalesced around counter-protests organised by various football hooligan firms to oppose the presence of the small Salafi Islamist group Ahlus Sunnah wal Jamaah in the town of Luton, Bedfordshire. "

"The EDL was founded in London in 2009; Tommy Robinson, a former member of the British National Party (BNP), soon became its de facto leader. It coalesced around counter-protests organised by various football hooligan firms to oppose the presence of the small Salafi Islamist group Ahlus Sunnah wal Jamaah in the town of Luton, Bedfordshire. "

"The British National Party (BNP) is a far-right and fascist political party in the United Kingdom."

Artikel 2 van de VN inzake genocide:
In the present Convention, genocide means any of the following acts committed with intent to destroy, in whole or in part, a national, ethnical, racial or religious group, as such:

Geen grap. Als je er doorheen rijdt zie je het al. Vraag je aan je Engelse maatje 'what the fuck is this' - krijg je als antwoord - 'ah mate, forget what you saw these are the worst of the worst England has to offer druggies, alcoholics, girls sell their arses as young as 11, lads do fuck all but rob and steal and drink, home is abuse and rape, it's a shithole but it is what it is and nobody cares'

NSPCC, the Independent, 2013,
As we have seen from our brief examination of Islamic doctrine and history, sexual slavery was developed as a religious weapon, a way of furthering domination by Islam, and was employed throughout the history of Islam (slavery only being outlawed in Saudi Arabia in 1962). Slavery and concubinage have served the power interests of Islam, helping it advance, from the domination of the Arabian Peninsula to the conquest of the lands from Portugal to Afghanistan, and the lands from Central Africa to Central Europe. That slavery is still envisaged as a part of the future of Islam can be found from a clarification given by a Sheikh (a Muslim Bishop) to an Arabic TV channel, as late as 2011(!):

"Spoils, slaves, and prisoners are only to be taken in war between Muslims and Infidels. Muslims in the past conquered, invaded, and took over countries. This is agreed to by all scholars - there is no disagreement on this from them, from the smallest to the largest, in the issue of taking spoils and prisoners. The prisoners and spoils are distributed among the fighters, which includes men, women, children, wealth, and so on.
When a slave market is erected, which are called in the Koran by the name of milk al-yamin, "that which the right hand possess" (Koran 4:24). This is a verse from the Koran which is still in force, and has not been abrogated. The milk al-yamin are the sex-slaves. You go to the market, look at the sex-slave, and buy her. She becomes like your wife, (but) she doesn't need a (marriage) contract or a divorce like a free woman (Muslim woman), nor does she need a wali. All scholars agree on this point - there is no disagreement from any of them."

Dan laatste belangrijke zij-notitie: "In an inquiry by the Office of the Children’s Commissioner in 2012, 36 per cent of victims of group or gang child abuse identified their attackers as white, 27 per cent as Asian, 16 per cent as black, with 16 per cent unspecified."

Second, Tommy’s lawyers outlined in shocking detail the abuse that he has been subjected to in prison.
- His lawyers' meetings have been cut short by prison officials; in one case they were cancelled.

- Tommy is only allowed out of his cell for half an hour a day, and at a time when he cannot call his children.

- He has been refused privileges that other prisoners have, like being able to attend church. (Do you think the British government would ever deny a Muslim prisoner the right to attend a prison mosque?)

- And of course, there’s Tommy’s solitary confinement - the only way for him to stay alive in a prison dominated by Muslim gangs.

And here's to you Mr. Robinson
Jesus/allah * loves you more than you will know.

*kopje koffie in de lucht houdt*
# And here's to you, mr. Robinson #