Maar goed, dan die """bronnen""" aan Fox News over de laptops. "The FBI is in possession of the laptop purportedly belonging to Hunter Biden which contained emails revealing his foreign business dealings, including contacts in Ukraine and China, two senior administration officials told Fox News Tuesday. The FBI declined to confirm or deny the existence of an investigation into the laptop or the emails, as is standard practice. Further, Fox News has learned that the FBI and Justice Department officials concur with an assessment from Director of National Intelligence John Ratcliffe that the laptop is not part of a Russian disinformation campaign targeting Democratic presidential nominee Joe Biden." 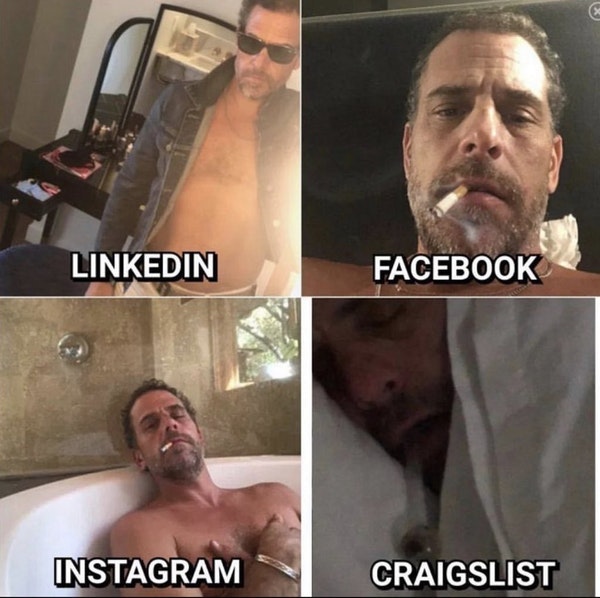 How it started - How it's going 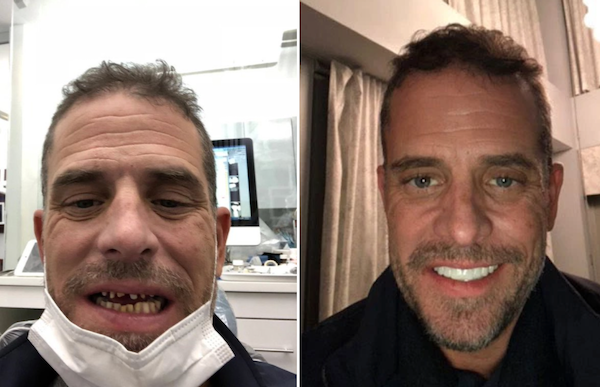 Vergeet ook deze niet : "Joe Biden's son emailed shop owner about hard drive to 'get it back'" van Sky New Australia van afgelopen zondag op Youtube. "Mr Bannon told Ms Markson, “Hunter Biden’s lawyer has come to us both with phone calls and with emails saying, ‘hey, I’ve got to get the hard drive back’.” “This is not some Russian intelligence operation; they admit it’s their hard drive,” Mr Bannon said. “We have the emails from the Lawyer, if we need to release them, we’ll release them.” "

Nergens over. Want er is niks.

Hunter Biden Business Associate Flips From Prison, Releases Emails Detailing China Influence-Peddling Operation
Emails from a former business associate of Hunter Biden's inner-circle who's serving time in prison for a 2016 investment scheme reveal that Hunter and his colleagues used their access to the Obama administration to peddle influence to potential Chinese clients and investors - including securing a private, off-the-books meeting with the former Vice President. (...) I know it is political season and people are hesitant but a group like this does not come along every day," said intermediary Mohamed A. Khashoggi on behalf of the CEC to a Biden / Archer associate. "A tour of the white house and a meeting with a member of the chief of staff’s office and John Kerry would be great," reads the email. (...) The original Oct. 19, 2011, email from Khashoggi was sent to Gary Fears — a controversial political fundraiser with a checkered history who was caught up in a riverboat casino scandal in the mid-1990s — who forwarded it on to Archer a couple weeks later on Nov. 5, 2011.

Time was short, as Khashoggi’s original email noted that the Chinese delegation would be in DC on Nov. 14, 2011. Fears told Archer to “reach out” to Khashoggi about the request regarding getting the Chinese businesspersons and officials into the Obama White House, adding it would be “perfect for” Archer to also “attend” with them and then “get guys for the potash deal.”

The same day Fears sent Khashoggi’s message to him, Archer took the email from Fears and sent to Khashoggi a business proposal for a potash mine deal he had lined up.

Six days after the initial overture, Archer received a followup email asking how a meeting with CEC’s representative went. The email closed with “Do me a favor and ask Hunter [Biden] to call me — I’ve tried reaching him a couple of times.” Archer responded, “Hunter is traveling in the UAE for the week with royalty so probably next week before he will be back in pocket…. The meeting with [CEC representative] was good. Seems like there is a lot to do together down the line. Probably not a fit for the current Potash private placement but he’s a good strategic relationship as the mine develops. Definitely have a drink with Mohammed and let him know how impressed I was with his whole deal.” (......)

"Secret Service logs obtained earlier this year by Senate investigators include dates and locations matching those discussed in the emails allegedly belonging to Hunter Biden, the son of Democratic presidential nominee Joe Biden. The alignment of the dates in the emails and the Secret Service protective detail logs is significant because the authenticity of the emails, first published by The New York Post last week, is the subject of heated debate. " Bron: www.theepochtimes.com/secret-service-...

Wiki: "Also notable is that one Wikipedia editor who has frequently contributed to Hunter's page, 'Soibangla,' had previously tweaked Jeffrey Epstein's page to say that there's "no evidence" that Bill Clinton was friends with the dead pedophile - despite the former President having traveled on Epstein's 'Lolita Express' at least 26 times according to flight logs, while witnesses claim to have seen Clinton on 'pedo island' hanging out with 'two young girls.'

Curiously, the same Soibangla is one of the top authors on a new Wikipedia page titled, ‘Biden–Ukraine conspiracy theory’. The page was created on October 15, the day after the Post published Hunter’s alleged email history. The article calls the controversy “a series of false allegations” and references an almost identical list of eight sources to back it up. -RT"

It kicked off again on September 30, when user ‘Php2000’ removed ‘debunked’, noting that “Sources state [Hunter Biden] was making 50,000 USD a month as a board member in Ukraine gas company. Hardly ‘debunked.’”

Just two minutes later, according to the website’s timeline, editor ‘Billmckern’ reverted the change, adding, “it’s been debunked and we have consensus language here.”

"Php2000 once again deleted the word, explaining that Hunter Biden making a lot of money in Ukraine was a well-documented fact. “What exactly has been debunked?” they asked. “Read the references,” wrote Billmckern a mere four minutes later, once again restoring the controversial phrasing. -RT"

Facebook: "Before ending up at Facebook, Makanju was a nonresident Senior Fellow at the Atlantic Council. The Atlantic Council is an ostensibly non-partisan think tank that deals with international affairs. In fact, it’s a decidedly partisan organization.

In 2009, James L. Jones, the Atlantic Council’s chairman left the organization to be President Obama’s National Security Advisor. Susan Rice, Richard Holbrooke, Eric Shinseki, Anne-Marie Slaughter, Chuck Hagel, and Brent Scowcroft also were all affiliated with the Atlantic Council before they ended up in the Obama administration.

The Atlantic Council has received massive amounts of foreign funding over the years. Here’s one that should interest everyone: Burisma Holdings donated $300,000 dollars to the Atlantic Council, over the course of three consecutive years, beginning in 2016. The information below may explain why it began paying that money to the Council.

Not only was the Atlantic Council sending people into the Obama-Biden administration, but it was also serving as an outside advisor. And that gets us back to Anna Makanju, the person heading Facebook’s misleadingly titled “election integrity program.”

Anna Makanju is a nonresident senior fellow with the Transatlantic Security Initiative. She is a public policy and legal expert working at Facebook, where she leads efforts to ensure election integrity on the platform. Previously, she was the special policy adviser for Europe and Eurasia to former US Vice President Joe Biden, senior policy adviser to Ambassador Samantha Power at the United States Mission to the United Nations, director for Russia at the National Security Council, and the chief of staff for European and NATO Policy in the Office of the Secretary of Defense. She has also taught at the Woodrow Wilson School at Princeton University and worked as a consultant to a leading company focused on space technologies."
www.zerohedge.com/political/does-expl...

Unusual Activity Alert
This business recently received increased public attention, which often means people come to this page to post their views on the news.

Rudy Giuliani’s efforts to tarnish Joe Biden’s presidential campaign continued in Delaware when he visited a police station Monday to share files from what he said was Hunter Biden’s laptop.

Jennings’ office gave the device to the FBI, which reportedly is investigating the veracity of claims about the origin of the laptop and how its contents were shared with Giuliani’s team, Marshall said. eu.usatoday.com/story/news/politics/2...

He described a hypothetical phone call to Exxon, America’s largest energy company, seeking a campaign contribution. “So I call some guy, the head of Exxon. I call the head of Exxon. I don’t know,” he said. Mr. Trump said he could say: “Hi. How are you doing? How’s energy coming? When are you doing the exploration? Oh, you need a couple of permits?” Mr. Trump said he could ask for $25 million and the response from Exxon would be positive. “Absolutely sir, why didn’t you ask? Would you like some more?’” Mr. Trump said as he played out the scenario for the applauding crowd. www.nytimes.com/2020/10/20/us/electio... Waarna oliereus Exxon het nodig vond te tweeten dat dit nooit gebeurd is.

@HoerieHarry | 21-10-20 | 21:00: On Oct. 14, Delaware computer repairman John Paul Mac Isaac claimed that in April 2019, a man who identified himself as Hunter Biden brought a liquid-damaged MacBook Pro to his small repair shop.

Mac Isaac said his poor vision prevented him from personally identifying the man as Biden. eu.usatoday.com/story/news/politics/2...

"Documents appear to show Hunter Biden's signature on $85 receipt for repair of laptops left at Delaware store at center of email scandal - while other paperwork reveals FBI's contact with owner." Bron: www.dailymail.co.uk/news/article-8857...

we gaan het zien over 2 weken !

"A Laptop Window on the Oligarchy. Hunter Biden was for sale to anybody who wanted influence with his father." Maar de WSJ zal ook wel geen serieus medium zijn..... en.wikipedia.org/wiki/No_true_Scotsma...

@Optelsommetje | 21-10-20 | 21:06: Er na dus : "After the fake interview, they returned to a hotel suite that had concealed cameras, and Bakalova took off Giuliani’s microphone. At this point, Giuliani leaned back on the hotel bed and stuck his hand into his pants, The Guardian reported. But before anything else could happen, Cohen, dressed as Borat, ran into the hotel room and said, “She’s 15. She’s too old for you.”

Ah! Dit is waar Lange Frans het dus over had!

@Kuifje-naar-Brussel | 21-10-20 | 21:54: Lezen! Was pas daarna. "After the fake interview, they returned to a hotel suite that had concealed cameras, and Bakalova took off Giuliani’s microphone. At this point, Giuliani leaned back on the hotel bed and stuck his hand into his pants, The Guardian reported. But before anything else could happen, Cohen, dressed as Borat, ran into the hotel room and said, “She’s 15. She’s too old for you.”

DOJ: Hunter Biddn story is not a Russian setup.