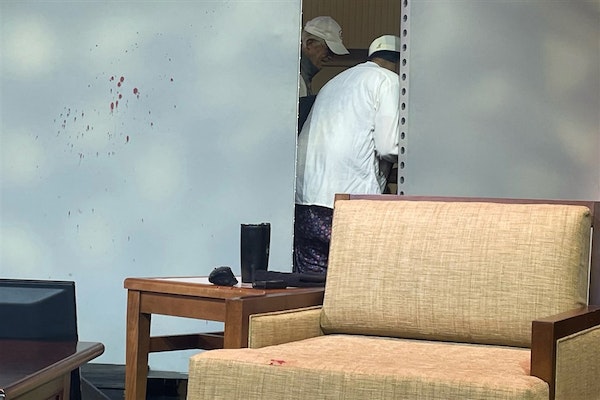 Laatst dit vreemde bericht op Liveumuamap, onder de Rusland zoekdinges.
twitter.com/KyleWOrton/status/1557712...
Wist/weet er nog geen raad mee maar dit is in ieder geval íetwat gerelateerd.
"Four of #Iran's IRGC operatives arrested in Argentina as they headed to the #Netherlands, where the Iranians have their own intentions, but it should be noted #Russia's spy-terrorist offensive against the Dutch has been escalated recently. Possible overlap"

“ What is freedom of expression? Without the freedom to offend, it ceases to exist.” Salman Rushdie

“ Contrary to popular misconception, Islam does not mean peace but rather means submission to the commands of Allah alone. Therefore, Muslims do not believe in the concept of freedom of expression, as their speech and actions are determined by divine revelation and not based on people's desires.

Although Muslims may not agree about the idea of freedom of expression, even non-Muslims who espouse it say it comes with responsibilities. In an increasingly unstable and insecure world, the potential consequences of insulting the Messenger Muhammad are known to Muslims and non-Muslims alike.

Muslims consider the honor of the Prophet Muhammad to be dearer to them than that of their parents or even themselves. To defend it is considered to be an obligation upon them. The strict punishment if found guilty of this crime under sharia (Islamic law) is capital punishment implementable by an Islamic State. This is because the Messenger Muhammad said, "Whoever insults a Prophet kill him."

However, because the honor of the Prophet is something which all Muslims want to defend, many will take the law into their own hands, as we often see.
[...]

So why in this case did the French government allow the magazine Charlie Hebdo to continue to provoke Muslims, thereby placing the sanctity of its citizens at risk?

It is time that the sanctity of a Prophet revered by up to one-quarter of the world's population was protected.

A prominent Taliban religious leader, Sheikh Rahimullah Haqqani, has been killed in a bombing attack at a seminary in Kabul, Taliban officials have said.

Of een te lage suikerspiegel had!

Dont look back in anger lalalala.

Of hij had 2.8 miljoen andere motieven.

"In 2017, Rushdie appeared on the HBO series “Curb Your Enthusiasm” and actually poked fun at the death threat. On the show, he offered Larry David advice on how to handle a fatwa that was placed on the comedian after making fun of the Ayatollah. Rushdie went so far as to claim that it attracted women who were drawn to having “fatwa sex.”

“Respect for religion has become a code phrase meaning 'fear of religion.' Religions, like all other ideas, deserve criticism, satire, and, yes, our fearless disrespect.”

@BoerKoekoek | 12-08-22 | 19:26: Spannend, even het kleine bijbeltje erbij pakken. “Be happy in your hope, stand your ground when you’re in trouble, and devote yourselves to prayer.”

CNN reports: 'Not all Democrats approve this attack, we just spoke the one person who doesn't'.

Mr. Rushdie had just come onstage and was seated in a chair as a staff member introduced him, when the assailant rushed the stage and assaulted the author. It was not immediately clear whether Mr. Rushdie was injured.

“There was just one attacker,” said Elisabeth Healey, 75, who was in the audience. “He was dressed in black. He had a loose black garment on. He ran with lightning speed over to him.”
www.nytimes.com/2022/08/12/business/s...