30+ New Yorkers drinken bleek to own the libs 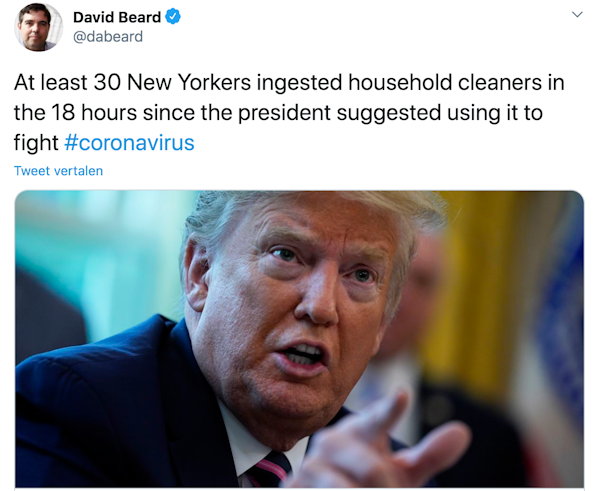 We vinden nog steeds dat het *in principe* zo kwalijk allemaal niet was. Maar goed, toen gingen flessen Lysol en bleekmiddel achterover en zijn we weer ingehaald door de werkelijkheid. "The New York Poison Control Center which is a subagency of the city's Health Department took 30 calls between Thursday at 9pm and Friday at 3pm. (...) None of the people who contacted Poison Control died or needed to go to hospital according to the Daily News. (...) Nine of the calls were specifically about a possible exposure to Lysol and ten were in regards to bleach. Another 11 calls were about household cleaners in general a spokesman told then news." Dat aantal meldingen is het dubbele van het normale aantal meldingen, dus een verband met Trumps overpeinzingen (na de breek) is niet heel ver gezocht. Home of the brave.

Dr Birx defends Trump musing about disinfectant injections: "When he gets new information, he likes to talk that through out loud ... I think he just saw the information at the time immediately before the press conference and he was still digesting." pic.twitter.com/UPr9XwPhaq

Donald T: "People should drink more water"
M5M: " 10 people drowned after Trump says they should take water"
CNN: "Trump says; wants to drown Americans. He has blood on his hands"
Hollywood: #Waterishate
Don Lemon: "Water is a white's supremacist racist genocidal tool to keep the black man down.
AOC + Omar +Democrats: "The green new deal must make water free for POC and undocumented immigrants as it is a dogwhistle for white people.
Biden: " we ehh should ehhh, look, here's the deal, like joe, oh sorry jill, water was in the 70's so justice for water to be vote for, ehh what was the question?

Best Statement Ever. The Very Best. I am happy I already came up with this statement long time ago. We have the best statements in the world. ;)

And then the disinfected = En dan het ontsmettingsmiddel
And that disinfects it = Hoe dat het desinfecteerd.

Bleekwater is desinfecterend, voor velen blijkbaar ook het enige.
En het was ook alleen maar een vraag.
"And then I see the disinfectant where it knocks it out in a minute. One minute. And is there a way we can do something like that by injection inside or, or almost a cleaning?"
Dus waar al die gekte vandaan komt is een raadsel.

Reporter, April 24: Can you clarify your comments about injections of disinfectant?

Trump: No, I was asking a question sarcastically to reporters like you, just to see what would happen.

Now, disinfectant, or doing this, maybe on the hands, would work. And I was asking the question of the gentleman who was there yesterday — Bill — because when they say that something will last three or four hours or six hours, but if the sun is out or if they use disinfectant, it goes away in less than a minute. Did you hear about this yesterday? But I was asking a sarcastic — and a very sarcastic question — to the reporters in the room about disinfectant on the inside. But it does kill it and it would kill it on the hands and that would make things much better. That was done in the form of a sarcastic question to the reporters. Okay.

Reporter: But you were asking your medical experts to look into it.

Reporter: Were you being sarcastic with them?

Trump: To look into whether or not sun and disinfectant on the hands, but whether or not sun can help us because, I mean, he came in yesterday and he said they’ve done a big study. This is a study. This isn’t where he hasn’t done it. This is where they’ve come in with a final report that sun has a massive impact, negatively, on this vir– in other words, it does not live well with humidity, and it doesn’t live well with sun — sunlight — heat. It doesn’t live well with heat and sun and disinfectant. And that’s what I brought out. And I thought it was clear. Okay. Anything else?

It's all about Darwin win-win...

Jesus' bleach has never failed me yet. Met Tom Waits.

Maybe this is the cure.

Rutte over groepsimmuniteit is wel oké?

Niemand is gestorven.
None of the people who contacted Poison Control died or needed to go to hospital according to the Daily News.

Jaap van Dissel, The Prince of Darkness, His Royal Badness...(*proest*)