"A new F-35C, airframe BuNo 168842, Modex 105, sporting a mirror-like coating, was photographed last week while arriving at Naval Base Ventura County (NBVC) Point Mugu, California, (...) The layout of the F-35’s coating is similar to what was seen on the F-22, with what appear to be small, mirror-like tiles that have been extensively applied on the nose section, weapons bay doors, fuselage and also inner and outer face of the twin tails."

And finally, 105's coating is (mostly?) made up of regular triangle/diamond tiles. Can't really tell how 100's coating is patterned, but we've seen different tiling configurations on the Nellis F-22s, so they might be testing different layouts on the F-35Cs as well pic.twitter.com/CjwRwLobBr 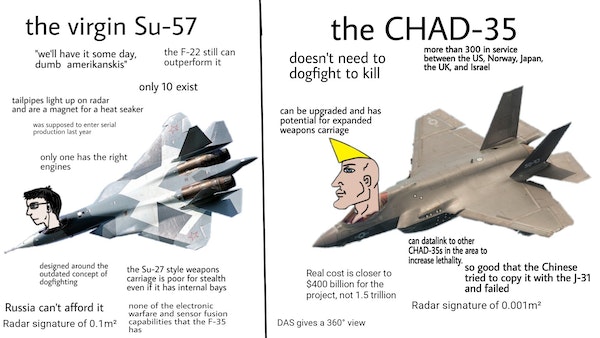 Unless you're one of the good guys.

— With it has come a return to a familiar practice in Russian doctrine for centuries: the use of massed heavy artillery. In contrast to U.S. doctrine, which emphasizes the relatively precise use of high explosives, Russian doctrine emphasizes massed firepower—and has for generations.

[....] During Russia’s second war in Chechnya, a consensus emerged among the Russian leadership that massive devastation and civilian fatalities were acceptable if they preserved Russian troops. Firepower was encouraged not only in order to limit Russia’s own casualties, which had been a sucking wound during the Soviet war in Afghanistan, but also as a show of force. The recent war in Syria reinforced this trend.

These city-cracking guns are brutal. Recalling walking through Grozny in February 2000, the BBC’s Andrew Harding described the city as having been “flattened totally, block by block, ruthlessly, efficiently, deliberately.”

LIVE #BOOS over The Voice deel 2: Is John de Mol?