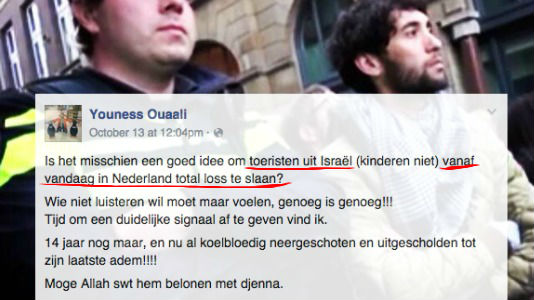 Jee... die mensen die daarop reageren volgen OF het nieuws niet, OF wonen in het Parallel Arabisch Universum (c) Sandmonkey
De PAU nader verklaart:
You can read all of his commentary at his site, but here is a summary and conclusion; the 7 political rules of the APU are:

1) Arabs never make mistakes, and they rarely lose wars.
2) The Zionists and the Americans are always to blame for everything that is wrong in the APU.
3) If there is any credit at all that can be contributed to Arabs in any way, they will take it.
4) Good leadership is inversely related to how US-friendly a leader is!
5) Any media that is not the official state-owned media is filled with Zionist, Jewish, American, Christian, imperialist, anti-arab influences and they LIE ALL THE TIME!
6) There is really no need for elections in the APU, because Presidents and rulers are presidents and rulers for life.
7) The only viable alternative candidate to the current leader or president is this current leader or presidents son.

And don't you dare criticize our violence, cause then we'll kill you, and that'll just prove how peaceful we really are! Take that you American and Zionist pig-dogs and your Democratically elected leaders that we hate and have caused the world to turn on you. But don't you dare criticise "our" democratically elected terrorist organization, because they were elected, so you have to like them, no matter how much we hate your democratically elected leaders - it's right to assume that the whole of America supported everything Bush stood for since as many as 50% voted for him, but it would be wrong to assume that every Palestinian supports everything Hamas stands for since only around 80% voted for them."

Dr. Wahid Abd Al-Magid, editor of Al-Ahram's Arab Strategic Report, has predicted that Arabs may become a majority in Israel in 2035, and will certainly be the majority in 2048.
Ze neuken ze gewoon de minderheid in, dat doodsteken hoeven ze niet te doen.