Dutch liberal party D66 wins the European elections in the Netherlands. The member of the ALDE group of the European Parliament is to get 5 seats out of the 26 available Dutch seats. This means D66, the party of Marietje Schaake and Sophie in 't Veld, wins two seats. That is the outcome of a nationwide vote count, conducted against the wishes of the European Commission by the weblog GeenStijl. Due to this "clandestine" count of real votes, GeenStijl is the only one who is able to predict a plausible outcome of the EU elections in the Netherlands. After D66, the christian democrat CDA of the EPP comes in second, but loses one seat and drops to 4 in the EP. Geert Wilders' Party for Freedom (PVV) loses 2 seats and drops to 3, despite his party's lead in national polls. The liberal right VVD, the party of Dutch PM Mark Rutte hold their fort at 3 - same as in 2009. Same goes for the social-democratic PvdA, their coalition partner in the Dutch government. On the left side, the GroenLinks (Greens) loses 1 seat to the animal party PvdD. The euro-sceptical socialist party SP hold on to their three seats. Christian combination CU/SGP also hold their two shared seats in the European Parliament. 50PLUS, the "babyboomer party", most likely doesn't pass the treshold for a seat, while Artikel 50 party leader Daniël van der Stoep loses his one seat in the EP before Sunday, when the official numbers are released. With a voter turnout of 35%, the bustle at the polling stations was at a "regular low" for EU elections in the Netherlands. 65% of the people is either seemingly uninterested in the European Parliament, or unimpressed with the supranational powers of the EP. National elections have a turnout of around 75%. 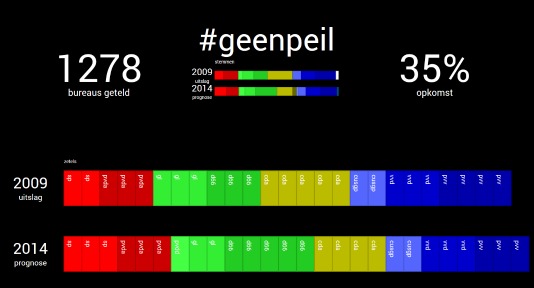 Collecting votes despite the embargo The European Commission prohibited the Dutch government to release the May 22 election results, because most European countries do not vote until Sunday. GeenStijl deemed this embargo undemocratic and at variance with democratic transparency, so the weblog asked its readers to attend the counting of votes in polling stations around the country, and then asked them to send in the results. GeenStijl made use of a rule in Dutch electoral laws that requires the outcome of elections to be read out loud at the countrys approximately 10,000 voting stations, but doesnt forbid the results from being recorded. Minister of the Interior, Ronald Plasterk, told the European Commission that GeenStijl operated within the boundaries of Dutch electoral law. He wrote this to Brussels after European Commisionar Viviane Reding demanded a clarification on the actions of GeenStijl from the Dutch government. Using their unprecedented method of data collection, GeenStijl managed to gather the results of 1287 polling stations, collecting a grand total of 664,316 votes - or 14.5% of the total number of votes. Real votes, not exit poll numbers. It is percentage-wise the biggest voting sample ever conducted, and it's the first time this many people attended the public vote counting with the intention to reach a plausible national result. With 1 in 6 Dutch votes collected, and after weighing them against demographic and statistical data, GeenStijl feels they managed to present an outcome that is approximately 98.5% accurate. A per municipality breakdown of the results kan be found at geenstijl.nl/eu2014/resultaat/. 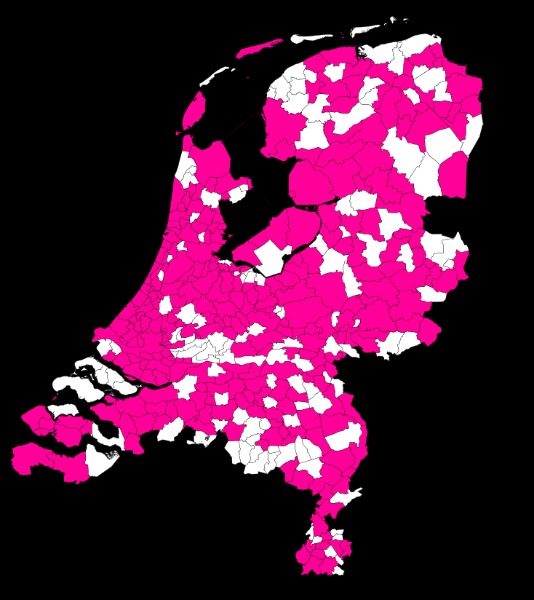 About GeenStijl GeenStijl made some waves in Europe last year, when it videotaped MEPs who signed in to the attendance register for a plenary session in the EP, cashed their fee, and then left. Two MEPs, Miloslav Ransdorf and Raffaele Baldassarre responded agressively to reporter Tom Staal when confronted with their behaviour. See here for the video. Amsterdam, 23 May 2014 PLEASE RT.
@Van Rossem | 23-05-14 | 20:59 | 129 reacties

@seven | 23-05-14 | 21:36
If they choose not to take part in the elections, doesn't that mean that they consciously choose to be ignored? On what basis do you conclude that they "must" really dislike the EU?

Maybe they just didn't give a shit, or found the europhile politicians to be incredibly honest and dependable, so they stayed at home because they have full confidence that the elected MEPs will advance the people's interests in the EP.

We cannot know what the 65% non-voters think of the EU, because they have decided to not make themselves heard. If they hated the EU so badly, they would have voted on parties that shared that opinion.

Not voting = agreeing with whatever the election results are. That's how it works, I'm sorry.

Very well done by No Style. Maybe they can get a reel scoop by filming how votes disappear in the vote counting process or how votes for unwanted Parties are made invalid by left votecounters by adding a second vote themselves in order to gradually decrease a few seats for that Party in total that nobody can explain. Afterall, it's NOT a matter of democracy but the conceiling of one that is not with us is against us

O, sorry, maybe wrong topic, but i Am fokkend.

How nice we go international, maybe i'll get famous someday ;)

Konijnenhol:22:46: Yeah your right,Joop was a visionair, ,undertaking, is gone be future.Unemploimentnumbers will dramaticaly going down.

Are we gonna talk English now? Don't make it Dunglish. The most brilliant I find is the one of Joop de Uyl, former prime minster of our wonderful country: The dutch are a nation of undertakers'.
He meant entreperneurs, he was tidy bit lost to translate it correctly.

Goed werk hoor jongens of goed werk hier jongens?
I shoot doe a curse if ai were you

Holy shit,Demons666 is gone tackle the problems we face,that Greta could repair... not to much coles,I hope.??

in other woorden, WE ROCK

NoStyle took Dunglish to another level...

The motto of the EU is divide et empera.

It is the day after and the Dutch are complaining about their politicians. As the saying goes: " barking dogs don't bite.

@seven | 23-05-14 | 21:36
Outstanding. It's worth noting that almost two-thirds of those eligible to vote refused to show up. Many of them out of apathy, that is true, but a substantial amount of them refuse to vote in European elections out of principle. You could call them the silent majority.

Let's hope the elections in Britain did not suffer from the same effect. Even if these elections are little better than mock elections, because our votes do not matter, it's always better to turn out and vote for candidates who oppose what's going on. And if there is any party in Europe that deserves seats in the European Parliament, it's UKIP.

We are the louse in the polls of democrassie and we kick against the painfull scheens of establisjment.

Geenstijl, the best horse of the stable.

Very good done, very much thanks"

We are the Dutch equivalent of the famous Gaul village...

Proficiat GS ! Very good work. Why don't they put you on National TV, instead of those amateuristic leftist - biased public broadcasting NOS firm ???

I miss some bite-ready piecharts.

UK voters should do the same next time. Now UKIP's yesterday victory is not written about elsewhere in Europe.

And Yess Noardburgum had the first votes evah..... I wass there...

Writing posts in English on a Dutch weblog is No Style.

You forgot to mention the bias which was taken into consideration.

I have got to go now, my wife fell off the kitchenkick.

Good work hear guys, i am very pride on you.

Nothing like sticking feathers up your own arse is there?

Afraid I predicted this correctly in a topic some days ago ("Predict how many seat the opinion poll of Maurice de Hond is wrong").

Like, oh my god you guys, what you did is amazing! I'll be sure to retweet and tell all my friends about this. Finding a loophole and stuff? Brilliant. All kudos to Bratt Newman and his comrades.
Where I come from, they've been talking about your little stunt ALL DAY at work. Truly awesomesauce!

Ok, I'm confident I speak English after reading this.