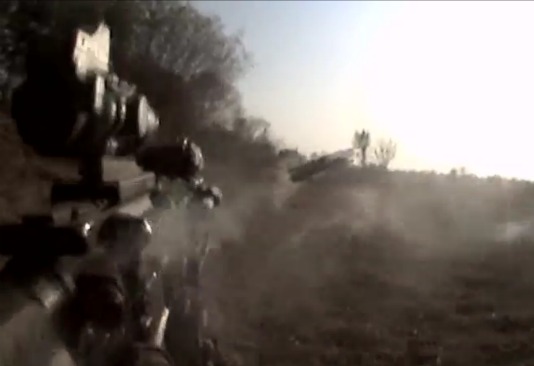 We come in peace. Shoot to kill.

Shoot or be (in geval van islamists) exploded.

suppose there is a war and nobody is going

A closing note on Specialist Pulaski: When Specialist Gannons squad came under ambush, Specialist Pulaski charged across an open field to come to their assistance, a moment not captured in the video. In the process, he drew enemy fire away from other American soldiers who were pinned down in dangerously vulnerable positions.

Several weeks after Haruti, Specialist Pulaski came home to begin the process of leaving the Army. Though he loved being a soldier, he was frustrated by the strictures of military life, his friends said, and decided he wanted to return home to Arizona.

In late March, the specialist was drinking at a bar in Glendale, Ariz., when he got into an argument with another man. According to the police, the specialist pulled out a .45-caliber pistol and shot the man in the neck, then fled on his motorcycle.

The man was taken to a hospital and recovered. But Specialist Pulaski was chased down by a police officer. He fired on the officer but missed. She fired back and killed him. He was 24.v

I am offended by the foul language used in this film!
Ow wacht, ik ben geen kinderlijke amerikaan