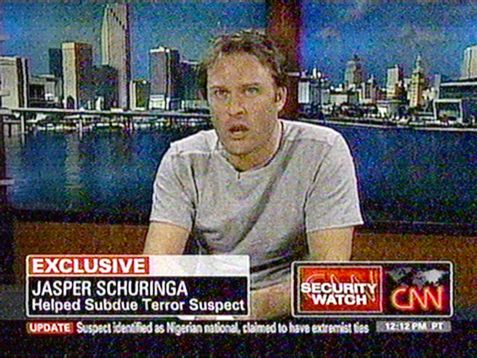 Hahahaha! Jasper is een Curacaoenaar!
"Jasper was born in Curacao, a former Dutch colony in the Caribbean though his family often moved, globetrotting for his fathers job with the Shell Oil firm."

Six months on, it is obvious that Ms Soltan did not die in vain. The manner of her death, and the regimes response, has shredded what little legitimacy it had left. She helped to inspire an opposition movement that is now led by her generation, which a systematic campaign of arrests, show trials, beatings, torture and security force violence has failed to crush, and whose courage and defiance has won the admiration of the world.

As the new year approaches, the so-called Green Movement appears to be gaining confidence and momentum. It no longer seems impossible that the regime could fall in 2010. If and when it does, Ms Soltan will be remembered as the pre-eminent martyr of the second Iranian revolution.

"Just because you're paranoid, don't mean they're not after you"

I look up
The heads fly over
I see a boy I know: his hair's on fire
The whole world I discovered
If you're so special why aren't you dead

Stay out of this, trust me on this one at least.
vids.myspace.com/index.cfm?fuseaction=...
Mijn oordeelsvermogen wordt wel heel vaak in twijfel getrokken nowadays.
Verheugend :-P

Dát is on topic.

Merry Christmas. I kill you (Achmed)

We also have Henny Houseman, whom is also a hero and maybe even a bigger one than Jasper. Forget that not. Also we have Regilio who saved so many planes single handedly that we lost count of them. So you see where a small country can be big in.

I'm a sucker for Gospel. Hallelujah !