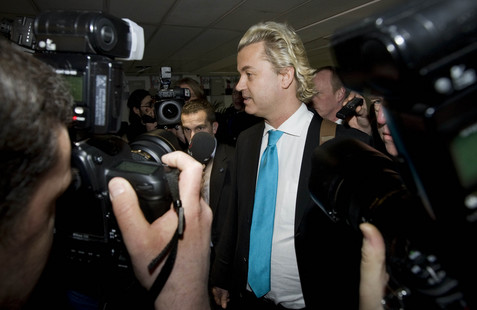 "After being questioned at Heathrow, the MP said he had been to the House of Lords two weeks ago and there had been "no problem"."
news.bbc.co.uk/2/hi/uk_news/politics/7...

We intend to show and discuss the film with members of the British Parliament and the press as previously indicated, with or without Mr Wilders.

*kwoot*
Ahmed: "If this man was allowed into this country it would certainly cause problems within communities around Britain."
*/kwoot*

Ik herhaal het nog maar eens, een spreuk van Oscar Wilde(rs):
.
"If one tells the truth, one is sure, sooner or later, to be found out"
.
Sooner is wel zo prettig....

Mr Wilders' film Fitna caused outrage across the Muslim world when it was posted on the internet last year.

After being questioned at Heathrow, the MP said he had been to the House of Lords two weeks ago and there had been "no problem".

He added: "I'm not doing anything wrong. I'm not protesting or running through the streets of London."

Mr Wilders added: "Democracy means differences and debate. It's a very sad day when the UK bans an elected parliamentarian... Of course I will come back."

He said the government's actions had proved that Gordon Brown was the "biggest coward in Europe".

Mr Wilders was invited to the House of Lords for a screening of Fitna by the UK Independence Party's Lord Pearson.

"And do not suppose that this is the end. This is only the beginning of the reckoning.This is only the first sip, the first foretaste of a bitter cup which will be proffered to us year by year unless by a supreme recovery of moral health and martial vigour, we arise again and take our stand for freedom as in the olden time."
Churchill 1938

SIGN THE GEERT WILDERS PETITION IN THE NAME OF FREEDOM OF SPEECH
www.youtube.com/watch?v=E8cZyE1VcgI&am...

Obsession - Radical Islam's War Against the West is a new film that will challenge the way you look at the world.

Almost 70 years ago, Europe found itself at war with one of the most sinister figures in modern history: Adolf Hitler. When the last bullet of World War II was fired, over 50 million people were dead, and countless countries were both physically and economically devastated. Hitlers bloody struggle sought to forge the world anew, in the crucible of Nazi values. How could such a disaster occur? How could the West have overlooked the evil staring it in the face, for so long, before standing forcefully against it?

Today, we find ourselves confronted by a new enemy, also engaged in a violent struggle to transform our world. As we sleep in the comfort of our homes, a new evil rises against us. A new menace is threatening, with all the means at its disposal, to bow Western Civilization under the yoke of its values. That enemy is Radical Islam.

Using images from Arab TV, rarely seen in the West, Obsession reveals an insider's view' of the hatred the Radicals are teaching, their incitement of global jihad, and their goal of world domination. With the help of experts, including first-hand accounts from a former PLO terrorist, a Nazi youth commander, and the daughter of a martyred guerilla leader, the film shows, clearly, that the threat is real.

A "peaceful" religion is being hijacked by a dangerous foe, who seeks to destroy the shared values we stand for. The world should be very concerned.
www.obsessionthemovie.com/

Niet alle Engelsen zijn niet-begrijpers, onderstaande heeft het begrepen ik sluit me bij hem aan. "Why are we banning this elected politician from our country, yet elevating people like Mr. Ahmed to the highest levels of our government, only to turn around and threaten our government with protests? The UK is meant to stand for freedom of speech - it's what has kept radical preachers in this country for decades with no hope of expelling them - but we aren't allowed to invite someone to TALK about it! Freedom of speech seems only to apply to Muslims these days. Everyone else is branded an 'islamophobe' for daring to exercise their fundamental rights in a 'free' society.
Chris Haynes, London, UK " Bron: BBC.com

Resistance is futile you all will be assimilated!

Banned Dutch MP Throw Out Of UK
In a text to the AP news agency, Mr Wilders said he had no regrets about the trip, attacking "the cowards in the UK government," and accusing Gordon Brown of having a servile attitude toward Islam.

A small shame for a man, a giant mischief to mankind

Civilization will not last, freedom will not survive, peace will not be kept, unless a very large majority of mankind unite together to defend them and show themselves possessed of a constabulary power before which barbaric and atavistic forces will

We should seek by all means in our power to avoid war, by analyzing possible causes, by trying to remove them, by discussion in a spirit of collaboration and good will. I cannot believe that such a program would be rejected by the people of this country, even if it does mean the establishment of personal contact with the dictators.

1) I like pigs. Dogs look up to us. Cats look down on us. Pigs treat us as equals.
2) However beautiful the strategy, you should occasionally look at the results.
3) It has been said that democracy is the worst form of government except all the others that have been tried.
4) Never hold discussions with the monkey when the organ grinder is in the room.
5) A fanatic is one who can't change his mind and won't change the subject.

Ja he, echt geenstijl van me.

They that can give up essential liberty to obtain a little temporary safety deserve neither liberty nor safety
quote: Benjamin Cramer

I have watched Wilders go from an obscure politician to a now infamous provocateur. Make no mistake, he is not interested in a debate. He is interested in promoting his position on Islam. And Britain has now given him a potent platform.

Whether you agree with his position or not, I found nothing insightful, original or thought-provoking about Wilders arguments. It is a shame that any debate about Islam that has so much relevance for so many people should become so dominated by a one-dimensional ideologue.

I cant help asking myself, if the British government had just let him in to screen his movie, would any of us even know or care that he was here at all?

"How dreadful are the curses which Mohammedanism lays on its votaries! Besides the fanatical frenzy, which is as dangerous in a man as hydrophobia in a dog, there is this fearful fatalistic apathy. The effects are apparent in many countries. Improvident habits, slovenly systems of agriculture, sluggish methods of commerce, and insecurity of property exist wherever the followers of the Prophet rule or live.

"A degraded sensualism deprives this life of its grace and refinement; the next of its dignity and sanctity. The fact that in Mohammedan law every woman must belong to some man as his absolute property, either as a child, a wife, or a concubine, must delay the final extinction of slavery until the faith of Islam has ceased to be a great power among men.

"Individual Moslems may show splendid qualities, but the influence of the religion paralyses the social development of those who follow it. No stronger retrograde force exists in the world. Far from being moribund, Mohammedanism is a militant and proselytizing faith. It has already spread throughout Central Africa, raising fearless warriors at every step; and were it not that Christianity is sheltered in the strong arms of science, the science against which it had vainly struggled, the civilization of modern Europe might fall, as fell the civilization of ancient Rome."

Free movement within the EU - a fundamental right

Free movement of people is a basic component of the single area which the European Union (EU) has been building since its inception. It is acknowledged as a fundamental right for EU citizens.

According to The English Labor party:

It is okay to invade a foreign country with a false pretend.
However, you are not allowed to speak your mind!

What happened to the brave land of Winston Churchill.

Dit verdient het om een diplomatieke rel te worden.
Toch maar even Voltaire aanhalen:
"I despise what you say, but I will defend to the death your right to say it." - Voltaire.

@ Jan Passant "What the horn is to the rhinoceros, what the sting is to the wasp, the Mohammadan faith is to the Arabs" quote van dezelfde man...

bizar.
We shall surrender on the beaches on the streets and in the fields; we won't fight them on the ocean in the air or anywhere.

Be prepared UK, this means war!

"If one tells the truth, one is sure, sooner or later, to be found out"

Mr Wilders told The Times on the flight that the British Government was the biggest bunch of cowards in Europe.

In wat voor wereld leven we...

United Dhimmi-dom, in de EU samen met the Islamic/Christian/Socialist Kingdom of the Netherlands......