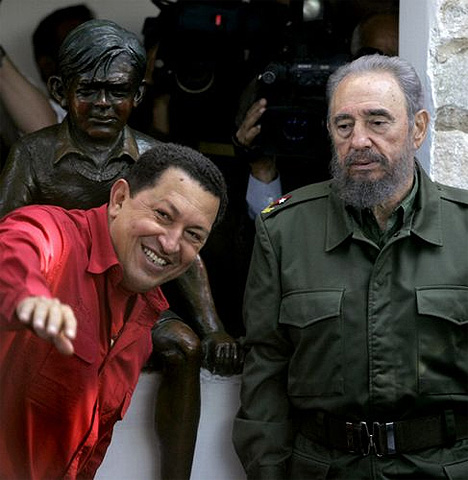 In 1959, Che Guevara was appointed commander of the La Cabana Fortress prison. During his term as commander of the fortress from 1959-1963, he oversaw the execution of what some estimate to be approximately 500 political prisoners and regime opponents. Many individuals imprisoned at La Cabana, such as poet and human rights activist Armando Valladares, allege that Guevara took particular and personal interest in the interrogation, torture, and execution of some prisoners.

By The Associated Press

CARACAS - Venezuelan President Hugo Chavez said Friday that the United States' backing of Israel is responsible for flaming tensions in the Middle East and putting the world on course toward another "holocaust."

"The fundamental blame falls again on the U.S. empire. It's the empire that armed and supported the abuses of the Israeli elite, which has invaded, abused and defied the United Nations for a long time," Chavez said in a speech in Caracas.

"I'll seize this opportunity to condemn categorically and fully the aggression that the Israeli elite is carrying out against innocents over there in the Middle East," he said.

The Venezuelan leader charged that Israel is using excessive force.

"Are we going to bomb cities and tell them that we won't stop bombing until they return the soldier? That's crazy," he said.

"Worse, it's craziness with nuclear bombs. [The Israelis] have their weapons of mass destruction and nobody criticizes them, nobody says anything because the empire is behind them," Chavez said.

Blaming the escalation on Washington's undue influence, Chavez said: "The U.S. empire's desire to dominate has no limits and that could take this world to a real holocaust. May God save us."