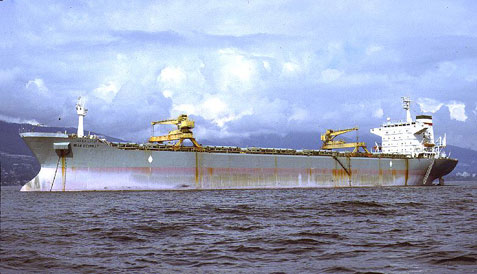 funny, even if it were to be nuclear cargo that doesn't mean they were gonna let it explode, thats just conspiracy mumbo jumbo and a very crude extrapolation. Btw the ship has now entered the habor of Rotterdam and the Dutch government has checked it, no sign of nuclear cargo are present and the ship is cleared. ooooooh maybe the dutch gov. is in on it!!! retards
[QUOTE UIT]

Nou ja, in elke crisis-situatie is er maar 1 vraag relevant: What would Brian Boitano do?
nl.youtube.com/watch?v=pmOx4GR2Ujs

he United States, believing that the ship may contain uranium, offered $7 million to board and search the ship
"I'm not aware of any chemical agent that produces loss of hair within a few days. That's more suggestive of high levels of radioactive waste." en.wikipedia.org/wiki/MV_Iran_Deyanat

You have 2 minutes to reach minimum safe distance. Repeat: You have KggGGGrrrkroewieKggggg.

Imran Zakheav, your cargo is here...
You can pick it up in 2 days, after those 2 days, we'll probably send it back to Iran... You can pick it up there too... O yeah thanks for using IRISL, but maybe we can recommend to use FedEx
(voor degenen die zeggen dat Imran dood is, Hij overleefde z'n sniper-assasinatie ook!)

In Ned is toch alles welkom.

Yellowcakes (also called urania) are uranium concentrates obtained from leach solutions. They represent an intermediate step in the processing of uranium ores. Yellowcake concentrates are prepared by various extraction and refining methods, depending on the types of ores. Typically yellowcakes are obtained through the milling and chemical processing of uranium ore forming a coarse powder which is insoluble in water and contains about 80% uranium oxide and which melts at approximately 2878¡ÆC.

The ore is first crushed to a fine powder by passing raw uranium ore through crushers and grinders to produce "pulped" ore. This is further processed with concentrated acid, alkaline, or peroxide solutions to leach out the uranium. Yellowcake is what remains after drying and filtering. The yellowcake produced by most modern mills is actually brown or black, not yellow; the name comes from the colour and texture of the concentrates produced by early mining operations.

Initially, the compounds formed in yellowcakes were not identified; in 1970, the U.S. Bureau of Mines still referred to yellowcakes as the final precipitate formed in the milling process and considered it to be ammonium diuranate or sodium diuranate. The compositions were variable and depended upon the leachant and subsequent precipitating conditions. Among the compounds identified in yellowcakes include: uranyl hydroxide, uranyl sulfate, sodium para-uranate, and uranyl peroxide, along with various uranium oxides. Modern yellowcake typically contains 70 to 90 percent triuranium octoxide (U3O8) by weight. Other oxides such as uranium dioxide (UO2) and uranium trioxide (UO3) exist.

Yellowcake is used in the preparation of fuel for nuclear reactors, where it is processed into purified UO2 for use in fuel rods for PHWR and other systems using unenriched uranium. It may also be enriched, by being converted to uranium hexafluoride gas (UF6), by isotope separation through gaseous diffusion or in a gas centrifuge to produce enriched uranium suitable for use in weapons and reactors.

Yellowcake is produced by all countries in which uranium is mined.
en.wikipedia.org/wiki/Yellowcake
foto: web.ead.anl.gov/uranium/guide/prodhand...
recept voor thuis: www.yellowcakerecipe.net/

home.kpnplanet.nl/~frans.gordijn@kpnpl...
Waalhaven is wel meer gezeur begonnen, by the way.

@ Monsieur Bouzz : 22:21
Jaaaaaaaa!
Remember remember
the 12th of November
the gunpowder treason and plot
I can think of no reason
why the Gunpowder treason
should ever be forgot.

Guy Fawkes is in the building! A Trojan Horse if I ever saw one.

Remember, Remember, the 12th of November...