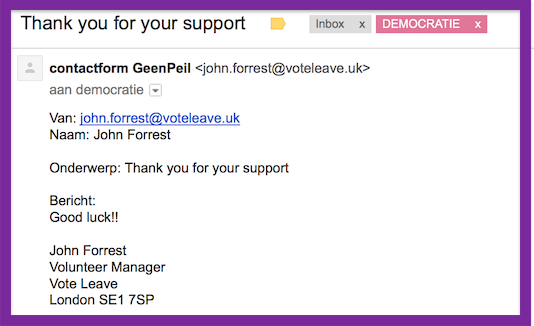 Ze hadden d'r wel lol in: "Take a quick picture, John. They're backing up on their road to democracy." pic.twitter.com/kKXxv3j1Mx

"If the EU was so great, they wouldn't have to beg us to stay in like they do, innit mate?" - Man op Straat in London.

Could MPs block an EU exit if Britain votes for it?
Michael, from East Sussex asks an intriguing question - could the necessary legislation pass the Commons if all SNP and Lib Dems, nearly all Labour and many Conservative MPs were in favour of staying?
The answer is that technically MPs could block an EU exit - but it would be seen as political suicide to go against the will of the people as expressed in a referendum. The referendum result is not legally binding - Parliament still has to pass the laws that will get Britain out of the 28 nation bloc, starting with the repeal of the 1972 European Communities Act.
The withdrawal agreement would also have to be ratified by Parliament - the House of Lords and/or the Commons could vote against ratification, according to a House of Commons library report.
It adds: "If the Commons resolves against ratification, the treaty can still be ratified if the Government lays a statement explaining why the treaty should nonetheless be ratified and the House of Commons does not resolve against ratification a second time within 21 days (this process can be repeated ad infinitum)."
In practice, Conservative MPs who voted to remain in the EU would be whipped to vote with the government. Any who defied the whip would have to face the wrath of voters at the next general election.
One scenario that could see the referendum result overturned, is if MPs forced a general election and a party campaigned on a promise to keep Britain in the EU, got elected and then claimed that the election mandate topped the referendum one. Two thirds of MPs would have to vote for a general election to be held before the next scheduled one in 2020.

Please be tolerant as your culture dies
.

"It is costly wisdom that is bought by experience."

"I once asked Rupert Murdoch why he was so opposed to the European Union. 'Thats easy,' he replied. 'When I go into Downing Street they do what I say; when I go to Brussels they take no notice.'"

We are all in the same boat.

A new European community is being born. Brexit, Nexit.

Turban bloke is smart and gets it.