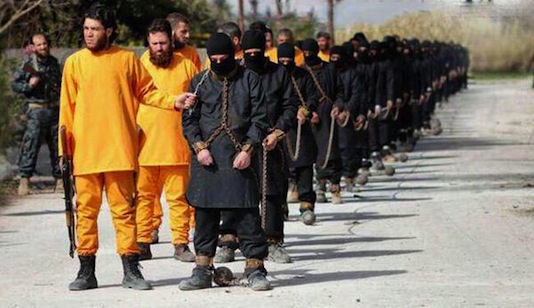 Often when there is a discussion of Jihad, an apologist for Islam will bring up
the tired cliché about how Jihad means struggle, as in inner spiritual struggle.
The idea is to say that Islam and Jihad are not about killing but self-improvement.
Unfortunately, Muhammads sanctification and self-help advice for Muslims
involves predation on non-Muslims. Informed non-Muslims know what they see and
read and that is: Jihad = Legalized Killing + Loot + (Sex)Slaves + Houris + Paradise.
From reading history and about current events, one can gather that when all the
hate and War verses of the Koran and Hadith are turned inward, a Muslims vaunted
inner spiritual struggle is mainly about the inner Jihadist killing the inner honest
nice guy. The inner spiritual struggle is about killing the fear of dying on the
battlefield!
Once the inner nice guy is killed, the inner Jihadist becomes THE Muslim self.

"an Imam producing the radio show Radio Islam, in Chicago, USA, said:
Islam does not condone terrorism; Islam is not at war with the West; and
your Muslim neighbor is your friend."
-
The problem with statement is that it contradicts the Koran and the traditions of
Islam, and the producers assumed name is Imam Abdul Malik Mujahid, which
means Leader, Slave, King, Holy Warrior. If Muhammads example and the
example of countless other Muslims means anything, it is only a matter of time
before this Muslim leaves Makka, makes his personal Hegira to Madina and then
wages Jihad."

Kijk, de politieke correctheid wil dit niet weten, kijkt er strak van weg, maar faciliteert wel dat er steeds meer gelovigen komen die overtuigd zijn van de absolute waarheid van dit soort tekst. Gefeliciteerd moslims! Het is een uitgelezen kans om heel veel andersdenkenden te vermoorden en ook heel veel cultuur te vernietigen. En mensen die kritiek hebben, die worden bedreigd of omgelegd of anders politiek correct gedomoniseerd en weggezet als racist.
-
"And kill them wherever you find them
"Then fight in the cause of Allah
"Fighting is prescribed for you,
"As to those who reject faith, I will punish them with terrible agony
"Soon shall We cast terror into the hearts of the Unbelievers
"Let those fight in the way of Allah
"Those who believe fight in the cause of Allah
if they turn renegades, seize them and slay them wherever ye find them
"And be not weak hearted in pursuit of the enemy;
that they should be murdered or crucified or their hands and their feet should be cut off on opposite sides
"I will cast terror into the hearts of those who disbelieve. Therefore strike off their heads and strike off every fingertip of them"
"And fight with them until there is no more fitna (disorder, unbelief)
"O Prophet, exhort the believers to fight..."
slay the idolaters wherever you find them, and take them captive and besiege them
"Fight against them so that Allah will punish them by your hands
"Fight those who believe not in Allah
may Allah destroy them;
"O Prophet! strive hard against the unbelievers and the hypocrites and be unyielding to them; and their abode is hell, and evil is the destination."
fight those of the unbelievers who are near to you
so We destroy it with utter destruction."
"Therefore listen not to the Unbelievers, but strive against them with the utmost strenuousness..."
smite at their necks till when you have killed and wounded many of them,
"Muhammad is the messenger of Allah. And those with him are hard (ruthless) against the disbelievers
"Surely Allah loves those who fight in His way"
"O Prophet! Strive against the disbelievers and the hypocrites, and be stern with them. Hell will be their home,
Allah's Apostle said... 'I have been made victorious with terror'
"The Messenger of Allah said: I have been commanded to fight against people so long as they do not declare that there is no god but Allah."
Fight in the name of Allah and in the way of Allah. Fight against those who disbelieve in Allah. Make a holy war...
"Kill any Jew who falls under your power."
"Killing Unbelievers is a small matter to us"
Allah said, A prophet must slaughter before collecting captives. A slaughtered enemy is driven from the land. Muhammad, you craved the desires of this world, its goods and the ransom captives would bring. But Allah desires killing them to manifest the religion.
"Fight everyone in the way of Allah and kill those who disbelieve in Allah."
if your refuse my Call, youve got to remember that all of your possessions are perishable. My horsemen will appropriate your land, and my Prophethood will assume preponderance over your kingship."
Bron: www.thereligionofpeace.com/quran/023-v...

"When Allah completed the creation, He wrote in His Book which is with Him on His Throne,

"My Mercy overpowers My Anger."

-I don't like you loving Allah more then me!
*I dislike you not loving Allah as much as I, even if you claim to love him more!

-I shall kill myself to kill you for not loving Allah, While Allah has proclaimed to love you And me ! But he will love me more because i think you don't love him enough. Thus making Allah love me more then you, even if you don't know who Allah is!

En hier:
2: 256 There shall be no compulsion in [acceptance of] the religion.

60:8 Allah does not forbid you from those who do not fight you because of religion and do not expel you from your homes - from being righteous toward them and acting justly toward them. Indeed, Allah loves those who act justly.

@Jan Boule | 28-06-15 | 15:16
Uit jouw eigen bron: Timur frequently used either the Islamic religion or the law and traditions of the Mongol Empire to achieve his military goals or domestic political aims.

En verder heeft hij zijn macht op leugens tegen God gebaseerd:
Therefore, Timur reacted to the challenge by creating a myth and image of himself as a "supernatural personal power" ordained by God.

Ik moet denken aan al die Austin Powers grapjes, zo van 'He'll never be the head of a major corporation' en 'That's not the way to get ahead in life'

"Islamic criticismEdit
ISIL has received severe criticism from other Muslims, especially religious scholars and theologians. In late August 2014, the Grand Mufti of Saudi Arabia, Abdul-Aziz ibn Abdullah Al ash-Sheikh, condemned the Islamic State and al-Qaeda saying, "Extremist and militant ideas and terrorism which spread decay on Earth, destroying human civilisation, are not in any way part of Islam, but are enemy number one of Islam, and Muslims are their first victims".[376] In late September 2014, 126 Sunni imams and Islamic scholarsprimarily Sufi[377]from around the Muslim world signed an open letter to the Islamic State's leader al-Baghdadi, explicitly rejecting and refuting his group's interpretations of Islamic scriptures, the Qur'an and hadith, used by it to justify its actions.[378][379] "[You] have misinterpreted Islam into a religion of harshness, brutality, torture and murder ... this is a great wrong and an offence to Islam, to Muslims and to the entire world", the letter states.[380] It rebukes the Islamic State for its killing of prisoners, describing the killings as "heinous war crimes" and its persecution of the Yazidis of Iraq as "abominable". Referring to the "self-described 'Islamic State'", the letter censures the group for carrying out killings and acts of brutality under the guise of jihadholy strugglesaying that its "sacrifice" without legitimate cause, goals and intention "is not jihad at all, but rather, warmongering and criminality".[380][381] It also accuses the group of instigating fitnaseditionby instituting slavery under its rule in contravention of the anti-slavery consensus of the Islamic scholarly community.[380] Other scholars have described the group as not Sunnis, but Khawarij.[382]

Kurdish demonstration against ISIL in Vienna, Austria, 10 October 2014
The group's declaration of a caliphate has been criticised and its legitimacy disputed by Middle Eastern governments, other jihadist groups,[383] and Sunni Muslim theologians and historians. Qatar-based TV broadcaster and theologian Yusuf al-Qaradawi stated: "[The] declaration issued by the Islamic State is void under sharia and has dangerous consequences for the Sunnis in Iraq and for the revolt in Syria", adding that the title of caliph can "only be given by the entire Muslim nation", not by a single group.[384] The group's execution of Muslims for breach of traditional sharia law while violating it itself (encouraging women to emigrate to its territory, traveling without a Walimale guardianand in violation of his wishes) has been criticized;[385] as has its love of archaic imagery (horsemen and swords) while engaging in bidah (religious innovation) in establishing female religious police (known as al-Khansa' Brigades).[386]

Two days after the beheading of Hervé Gourdel, hundreds of Muslims gathered in the Grand Mosque of Paris to show solidarity against the beheading. The protest was led by the leader of the French Council of the Muslim Faith, Dalil Boubakeur, and was joined by thousands of other Muslims around the country under the slogan "Not in my name".[387][388] French president François Hollande said Gourdel's beheading was "cowardly" and "cruel", and confirmed that airstrikes would continue against ISIL in Iraq. Hollande also called for three days of national mourning, with flags flown at half-mast throughout the country and said that security would be increased throughout Paris.[387]"

He ! iets over moslims wat leuk !

Het zou het allemaal wel wat overzichtelijker maken, verplichte uniformpjes daar. "In the orange corner, weighing in at 200 pounds we have Muhammed the Conqueror with a record of 300 beheadings. In the black corner we have Mohammed the Barbarian weighing 189 after this years Ramadam with a record of 289 burnings and 11 drownings". Nou nog weten welke kleur minder slecht is voor de gezondheid van de westerse fans.

Orange is the new black?