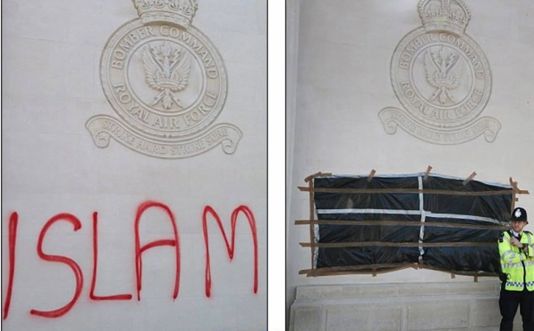 Een soort away with us dus.

People who incite others to break the law or act in a violent way can be charged with a criminal offence. Zo is het maar net.

Islam taking over, Europe soon to be unrecognizable


The murder of a soldier in London, the stabbing of a soldier in Paris and the violent outbreak in Sweden  Europe's alarm clock has been ringing once again over the past week. The negative birthrate compared to the increase in Muslims, the heavy unemployment and the social-religious isolation of European immigrants are all back on the agenda.
"Europe has lost its will to live as Europe "It is gathered into museums, into history. If the leaders will not put an end to immigration, we will soon be hearing the death throes of the continent as we know it. Even if it is somewhat demagogic to attempt to bind the three events from the past few days in different European sites under "Islamic extremism," and even if the rage sparks in the weaker classes of immigrants, it is hard to ignore the basic facts. Behind these events are African immigrants from Islamic countries. the effects of the Muslim minority in Europe in light of the radical Islam on European countries. When he sees the reality, he said, there is no alternative interpretation for the events. "There is no doubt that the unemployment and the economic hardships lead to rioting, as happened in France. And yes, there is a disadvantage compared to the European bourgeois, but this is not solely bitterness due to the economic situation  because there is unemployment among youngsters who are not Muslim, like in Spain for example. The Muslims have a fertile ground of mosques that awaken them, preach to them that they are deprived, that they don't belong, that they're not wanted and that the only solution is a country with an Arab majority. This is the starting point for these riots. Sweden is an example of the situation in Europe. Penniless immigrants coming from weakened and colonized countries, get housing, education and solid foundations from European welfare countries, and still express their anger at the establishment. The foundations they received could not exist in other countries," he said, "the conditions are much better than before, and it is true there is a great gap from the weaker classes, there is bitterness and deprivation  but the economic gap also existed in the countries of origin, under rich tyrants who ruled them. In Sweden, where the stronger classes are citizens and not tyrants, theoretically they have a fair chance to reach that level if they're lucky, some even managed to integrate in local and national politics. There is no depression aimed at the Muslims, it's the opposite. And still we witness such violent outbreaks.'European Softening
this is a process known in advance, ending with the disintegration of Europe in its current state. "It is all a result of a European softening, which the Muslims see as a weakness, as if they received Europe in their hands for free. They do not voluntarily blend in, entire neighborhoods perpetuate the culture they brought with them, they are not aware of the language and economy and stay in their enclaves. Once a French man of Algerian descent told me that they didn't move from Algeria to France, they brought Algeria to France.According to many, demographics, which is the topic for many studies, is the red light. It points to the path in which the continent is headed  the European birthrate is at a continuous standstill while Muslim immigrants are doubling their rates. If they wanted to integrate within the society, as European leaders had hoped, this wouldn't be an issue, But since they want to keep their identities and change Europe, it is obviously a big issue. Every year more Muslims than non-Muslims are born in France. Japan has no Muslims because they don't allow them in. Racism? Maybe. Superiority? Maybe. They don't care. They want to sustain Japan and are looking down on everyone.The dream of European leaders, mainly Germany's Angela Merkel and Britain's David Cameron, is to see the second and third generations of immigrants as ordinary citizens, and shatter the deliberate segregation of the immigrant Muslim community. "There are thousands of mosques in every host country, especially in the core countries  Germany, France and Britain. The parents, even those assimilated into the European society, make sure to send their kids to traditional schooling. The affinity to origin and religion exist all the time, more so to a global-Muslim entity and less so to the actual country of origin. They see the trends in their origin countries  Turkey, Egypt, they all discuss Islam as something global.How long will Europe contain the situation? "Good question After WWII Europe is extra careful about anything that has to do with human rights and right to freedom. On the other hand, it absorbs aliens that do not integrate within the community. Europe needs manpower because the birthrate is low, they need those immigrants that seek to change the religious identity of the continent. It is an interesting time."

perfect ! The point of no return is coming. Let the holy war begin !!

Sun : (..)Mr Khan added: I think I speak on behalf of nearly all 2.7 million Muslims in the UK when I say he does not speak on our behalf. Were sick of the sight of him.
.
Oh, dat valt best wel mee, 2,7 moslims. In Nederland hebben we 1,2 moslims, dat is dan zo gezegd, een stuk erger dan. Nu maar hopen dat hier niks gebeurd.

De oorlog in Europa is dichter bij dan u denkt!

@La Bailaora | 27-05-13 | 20:20
Bij de foto: Boris Johnson said of the Woolwich murder 'It is completely wrong to blame this killing on the religion of Islam'
Ook Johnson is dus zo'n landverrader.

In het echt sturen we een SEAL team of kruisraket.

@La Bailaora | 27-05-13 | 20:25
Eric Schmidt, executive chairman of YouTube-owner Google, has said he would allow extremist websites to continue being listed because he believes it can help police track potential terrorists.

"To survive war, you have to become war."

Deze is ook leuk:
"Spitting hatred on YouTube: Thousands of terror videos urging British Muslims to maim and kill can be found within seconds online":
www.dailymail.co.uk/news/article-23313...

The genie seems to be out of the bottle...

*Neuriet een beetje*
Would you like to see our coloured cousins, home again?
My friend. All you need to do is follow the worms..

"We will bef them on the beaches". manmanman