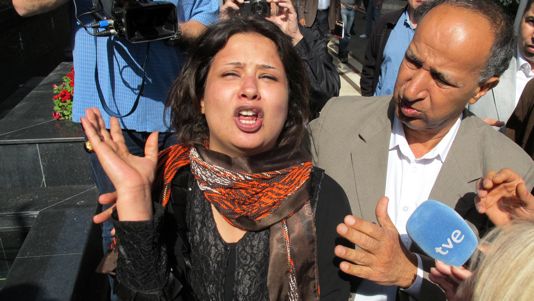 Sorry , but she is pushing up daisies by now ...

@La Bailaora | 26-03-11 | 18:39
Lekker beeldmateriaal zeg. :s
En ik vrees ook het ergste wat die rebellen betreft. Hier een mooie samenvatting van mijn vrees"My opposition to intervention in Libya has been misstated in the last few days. Some commentators claim Ive said the rebels are really al-Qaeda. That misstates my argument. As Ive repeatedly said, the rebels are a mixed bag. The strongest faction, particularly in ideological influence, is the Muslim Brotherhood, which has been in Libya for 70 years. There are also militant groups, such as Hasadis LIFG, that have ties to al-Qaeda, though they do not necessarily agree with bin Ladens decision in the 1990s to take the violence global. In addition, there are Islamist organizations (such as the National Front for the Salvation of Libya) that claim to be non-violent and that oppose Qaddafi because they have come to regard him as non-Muslim, an apostate whose eccentric brand of Islam is seen as heterodox, and who persecutes his Muslim people. Moreover, there are undoubtedly al-Qaeda operatives in the mix, because al-Qaeda goes wherever the action is.
To describe these factions is not to discount the existence of some secular opposition to Qaddafi: some leftists who see an opportunity, and even some Western-influenced freedom fighters. Interventionists delude themselves, though, when they portray the latter as predominant, as the face of the rebels."
www.nationalreview.com/articles/263138...

En lees het commentaar van foolwatch:
Well, you asked for a link so here is one of the prisoners being force fed dog carcass etc. I would say it is gadaffis lot that are the prisoners as they have the same dark green clothing that are identical, and this uniform is similar to other videos. This compares with the rebels who wear allsorts of stuff. 
Ottewel oorlogsschendingen door de rebellen, zie de bijgevoegde video:
www.youtube.com/watch?v=RwW6KggvbGM

Pics or it didn't happend!