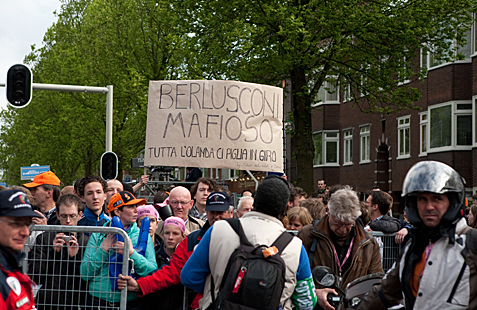 @Andrea1026 20:35
I feel for you. As of recently i (or we the dutch) know this sort of shameful feelings going abroad. Ten years ago i had to tell numberous of times: "I don't do drugs". Now I have to explain that i'm not one of those scared and angry little muggets who support this weird fascistoid singleminded wigfreak.
But i am still well of.. My creep will never reign this country. Yours is.
I sincerely hope for you and your fellow Italians that 'the times they are a changing'.
Keep up the protest

DEAR Utrechters or only Dutch people,

I am one of the authors of the protest that is reported here.
I am an Italian citizen staking a Master in Utrecht. I would just like to say:

1) the banner said also: tutta l'Olanda ci prende in giro (all Holland makes fun of us). This is a sad truth. every italian expat has to suffer the humiliation of being represented by an old criminal and pervert. We have to answer questions such as "why did italians vote for him?", "why don't they do something against?" and the like. Personally, this was a way to express my anger and frustration, and remember italians of the shame this man represents for us all over the world.
2) a big THANK YOU to all the people who supported us during the action (virtually everybody around us) and booed when the banner was taken with force from our hands.
3) to the police (or the burgmeester more accurately), i would like to remind that the man who was being contested is accustomed to using press conferences to talk about Ronaldinho and the state of his Milan F.C., about all the young Albanian ladies whose immigration into italy he would like to encourage, about the resemblance of other PMs with hollywood actors, all flavored with tons of jokes. When political men use their power to their own interest in such an arrogant and violent way there is no inconvenient setting to criticize their actions. Besides, the organizers of the Giro are just using you for their own marketing purposes. Freedom of expression is more important than a bunch of pink caps and shirts.