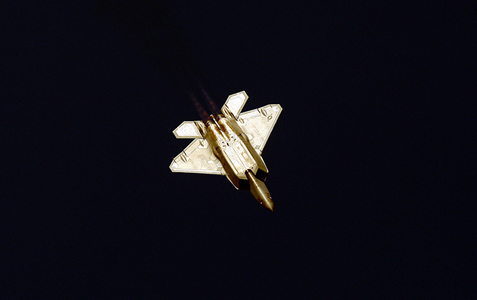 Zooming and Booming for the Sheer Hell of It

OK, today Im going to tell you everything you need to know about air power. You will never need to read anything else. These revelations will provide blinding insight into our current wars. Here we go. Hold on.

The foregoing is genius incarnate, and would revolutionize military thinking if the Air Force understood it, which it doesnt. As is usual with our late-simian species, the fly-guys' motivations are instinctual and emotional, with reason a pretext slathered on afterwards and accountability a no-show.

Now, it is chic among Military Reformers and other fern-bar Clausewitzes to say wisely that air power is impotent and useless and accomplishes nothing. This is not true. In its own kind of war, it works splendidly. Often it is the only thing that could. Anyone who thinks that airplanes are pointless gewgaws should talk, say, to Japanese survivors of the Coral Sea and Midway, or of Yamatos death run.

See, what airplanes are good at is blowing up expensive, visible, identifiable things, to include other airplanes. An aircraft carrier in the open Pacific fits the bill nicely. You cant hide aircraft carriers very well. They dont look like anything else. Even a Marine pilot would never mistake one for an olive orchard, or the cathedral at Chartres, or the Gobi Desert. They just dont look the same. With enough bombing runs, an airplane can hit a carrier, which reduces the number of enemies instead of increasing it.

What air power isnt good at is fighting guerrillas and insurgents, especially in populated areas. Why? Lots of reasons. First, pilots have no idea what they are bombing. They are flying at three hundred miles an hour over countries, often obscured by trees, in which everybody looks exactly like everybody else. So they guess, or bomb where the intelligence children tell them are terrorists. (That was almost a sentence.)

Now, the word intelligence sounds much better than bureaucratized clandestine confusion, which is more accurate. The intelligence agencies have enshrouded themselves in an aura of inexorable usually fatal infallibility. (My name is BondFred Bond.) This is good PR. It is little else.

These are the same intelligence agencies, remember, that didnt know where the Japanese fleet was in 1941 despite rumblings of war, agencies that were taken by surprise by the North Korean attack in 1950, and then by the Chinese entry into that war, that didnt anticipate the behavior of the Vietnamese in that war, despite Bernard Falls books and the highly documented experience of the French. When the military made a well-executed raid into Hanoi to free American prisoners at Son Tay, the intel people hadnt noticed that the prisoners had been moved. They were surprised when the Berlin Wall went up, and when it came down. They failed to foresee the collapse of the Soviet Union. (Their reason for existence was to know about the Soviet Union.) They missed on 9/11. Earlier, when the Air Force bombed the Chinese embassy in Belgrade, it was because the spooks didnt know where the embassy was that day. (Granted, embassies are hard to locate. They roll about on wheels, creep down alleys at night, and wear dark-colored clothing, that sort of thing.) The intel weenies also didnt foresee the behavior of either Iraqis or Afghans, despite great archives of historical evidence (unless you think the US knew about these upcoming messes and invaded anyway). And so on.

These are the geniuses picking targets. You see the problem.

Now, we read a lot of PR about surgical strikes and precision weapons. Think carefully about this. Intel says a terrorist leader of indescribable potency is in a house in a flimsily constructed suburb. The Air Force then makes a surgical strike with a five-hundred-pound bomb, taking out half a block. Pretty surgical, that. Perhaps it was the right blockit is possiblebut still kills seventy-five people. The male relatives of the dead then join the insurgency. Ray-rah air power. The Air Force cant afford to understand this, as then it would have to find a day job.

So why does the Air Force engage in counterproductive tactics with totally inappropriate airplanes? Because its the only kind of airplanes it has. Why? Because fast, screaming, roaring, flashy zoom-buggies with lots of screens and switches and rockets are fun. Never, ever underestimate fun as a driver of military policy. A hot fighter is the worlds pizzazziest, priciest, swooshiest video game, an air-borne dirt bike with all the fixins. Really. You may think Im trying to be snotty and clever. Think again. (All right, Im trying to be snotty and clever, but what Im saying is still true.)

Do you think I spent thirty years covering the military because I wanted to butcher puzzled third-world illiterates tending goats? No. It was fun. Low-level pop-and-drops in an F-16 out of Shaw AFB, F-15 air-to-air against Guard A-7s over Holloman, bomb runs at four hundred feet over hazy Wyoming badlands like the doorway to hell in a B-52god, what a freaking trip, far better than growing up. Snazzy mask and helmet, five-g turns with your face flowing back behind your ears, world going inverted, burners kicking inHoo-ah!

Its not called a joy stick for nothing.

And jet jocks get paid to do this. Whether it serves a practical purpose doesnt matter. Not with rides like those. If you think these things dont matter, you are out of your mind.

However, the glory days are coming to a close. Fighter guys are now in the position of cavalry in 1914, addicted to the Noble Horse but, in an age of machine guns, wire entanglements, and massed artillery, as viable as slide rules in Santa Clara. The reason is the armed drone, the Predator being a good example. These things now have the range, optronics, data links, and so on to carry serious missiles to hit the wrong targets and piss off entire populations as well as real horsesfighter planes, I meant to saycan. They are lots cheaper than piloted whiz-gizmos, and a bloodless unaccountable CIA geek in Colorado or wherever can fly them. Same stupid effect, but none of the fun. Call it anti-chivalry. Death by nerds without souls.

In a century weve gone from Baron von Richthofen to a dinosaur eyeing a thin crust of ice forming on his swamp and thinking, This cant be good.

Tacohoest meets Tsjernobyl. Check dit bericht over de hoest in de Oekraïne: "A cocktail of three flu viruses are reported to have mutated into a single pneumonic plague, which it is believed may be far more dangerous than swine flu. The death toll has reac...
@Pritt Stift | 16-11-09 | 08:59 | 240 reacties

The Decapitator is weer goed bezig