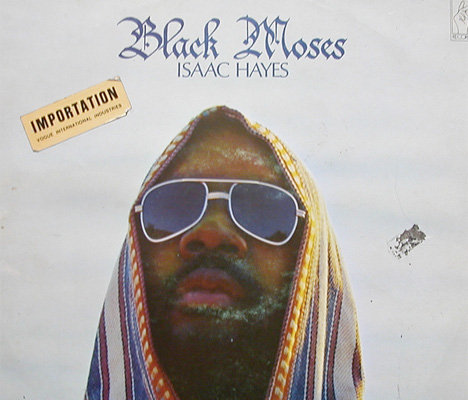 Oh my god they killed chef!!
You BASTARDS !

P.S. Sorry van gisteren mutter, for being a beterwetert. ;-)

And in the end, I know that somewhere out there... there's the good part of Chef... that's still alive in us all.
Sorry voor alweer-Chef'en, the man was and is more.

During the late-1990s, Hayes became popular as the voice of Chef on the Comedy Central series South Park. Chef was a soul-singing cafeteria worker at the South Park kids' school. A song from the series performed by Chef, "Chocolate Salty Balls (P.S. I Love You)", received some international radio airplay in 1999. It reached number-one on the UK singles chart and also on the Irish singles chart. The track also appeared on the album Chef Aid: The South Park Album in 1998.

In the South Park episode "Trapped in the Closet", a satire and expose of Scientology which aired on November 16, 2005, Hayes did not appear in his role as Chef. While appearing on the Opie and Anthony radio show about a month after the episode aired, Hayes was asked, "What did you think about when Matt and Trey did that episode on Scientology?" He replied (in a noticeably calm, casual manner), "One thing about Matt and Trey, they lampoon everybody, and if you take that serious, I'll sell you the Brooklyn bridge for two dollars. Thats what they do."

In an interview for The A.V. Club on January 4, 2006, Hayes was again asked about the episode. Hayes said that he told the creators, Matt Stone and Trey Parker, "Guys, you have it all wrong. We're not like that. I know thats your thing, but get your information correct, because somebody might believe that shit, you know?" He then told them to take a couple of Scientology courses to understand what they do. In the interview, Hayes defended South Park's style of controversial humor, noting that he was not pleased with the show's treatment of Scientology, but conceding that he "understands what Matt and Trey are doing."[15]

On March 13, 2006, a statement was issued in Hayes' name, indicating that he was asking to be released from his contract with Comedy Central, citing recent episodes which satirized religious beliefs as being intolerant. "There is a place in this world for satire, but there is a time when satire ends and intolerance and bigotry towards religious beliefs of others begins," he was quoted in a press statement. The statement, however, did not directly mention Scientology. A response from Stone said that Hayes' complaints stemmed from the show's criticism of Scientology and that he "has no problem  and hes cashed plenty of checks  with our show making fun of Christians, Muslims, Mormons or Jews."[16][17] Stone adds, "[We] never heard a peep out of Isaac in any way until we did Scientology. He wants a different standard for religions other than his own, and to me, that is where intolerance and bigotry begin." Stone and Parker agreed to release Hayes from his contract per his request.

On March 20, 2006, Roger Friedman of Fox News reported having been told that the statement was made in Hayes's name, but not by Hayes himself, as he suffered a stroke in January. He wrote: "Isaac Hayes did not quit South Park. My sources say that someone quit it for him. ... Friends in Memphis tell me that Hayes did not issue any statements on his own about South Park. They are mystified."[18] Hayes spokeswoman Amy Harnell denied that Hayes had had a stroke[19], but on October 26, 2006 Hayes himself confirmed that he did.[20]

On January 24, 2007, the New York Post reported that Hayes had told their reporter "They didnt pay me enough" and "They werent that nice".[21]

The South Park season 10 premiere (aired March 22, 2006) featured "The Return of Chef", a thinly veiled telling of the affair from Parker and Stone's point of view. Using sound clips from past episodes, it depicts Chef as having been brainwashed and urges viewers (via Kyle talking to the town) to "remember Chef as the jolly old guy who always broke into song" and not to blame Chef for his defection, but rather, as Kyle stated, "be mad at that fruity little club for scrambling his brains."

On April 9, 2008 Hayes was a guest on The Adam Carolla Show.[22] Hayes stumbled in his responses to questions, and a caller questioned whether Hayes was under the influence of a substance. However, Hayes' awkward answering and stuttering could be symptoms of aphasia, a form of language disorder from which many stroke patients (such as Hayes) suffer. Carolla and co-host Teresa Strasser asked Hayes if he had done a little "wake and bake", to which Hayes responded that he had written a cookbook. When the hosts clarified the question by asking if he had ever used marijuana, he replied that he had only ever tried it once. For the rest of the interview, the radio hosts made light of Hayes' awkward answers. Sound effects man Bryan Bishop has continuously replayed Hayes saying "It's good", "Mmmmmm... sometimes", "No", and "It's a good thing" as sound drops, often simulating conversation with his co-hosts. Hayes did admit during the interview that he was no longer on good terms with Trey Parker and Matt Stone.

I'd like to state that all my previous posts only represent my primary and unevaluated personal and unprofessional thoughts and feelings.

Who's the black private dick that's a sex machine to all the chicks?

"By the way dude, your Isaac Hayes impression stinks!"

Why, Isaac why? Why did you allow scientology to abuse you? Nothing they had on you or on anyone is bad enough to take you and all your loved ones back into slavery.