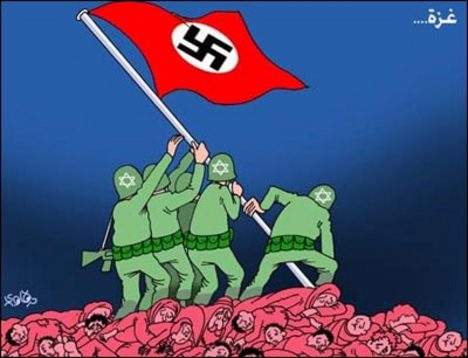 In de woorden van Borat: Throw the jew down the well!

No Iranians will beat us on our own turf!!! Zelfs de antisemitische cartoons zijn leuker als joden ze maken. Gein:

"After many bombings and other provocations failed to elicit a pretext for the planned
1982 invasion, Israel finally seized upon the attempted assassination of its ambassador in
London by the terrorist group headed by Abu Nidal, who had been condemned to death
by the PLO and had been at war with it for years. Resort to this pretext was acceptable to
articulate American opinion, which also had no problem with Israel's immediate response:
an attack on the Sabra-Shatila Palestinian refugee camps in Beirut, where 200 people
were killed, according to a reliable American observer.21 UN attempts to halt the
aggression were blocked by immediate US vetoes. So matters continued through eighteen
bloody years of Israeli atrocities in Lebanon, rarely with even a thin pretext of self-
defense.22
Chief of Staff Rafael ("Raful") Eitan echoed the common understanding in Israel when he
at once declared the 1982 invasion to be a success because it weakened the "political
status" of the PLO and set back its struggle for a Palestinian state. Leading US
intellectuals also welcomed the "political defeat" of the PLO, clearly recognizing that to
be the goal of the war while anointing it a "just war" (Michael Walzer).23 Most public
commentary and media, however, preferred tales about unprovoked rocket attacks on
innocent Israelis and similar fabrications, though by now the truth is sometimes
recognized. New York Times correspondent James Ben-net writes that the goal of the
1982 invasion "was to install a friendly regime and destroy Mr. Arafat's Palestinian
Liberation Organization. That, the theory went, would help persuade Palestinians to
accept Israeli rule in the West Bank and Gaza Strip."24 To my knowledge, this is the first
report in the American mainstream of what was well known in Israel and has been
published in marginalized dissident circles in the US for twenty years. It is also a
textbook illustration of massive international terrorism, if not the more severe crime of
aggression, tracing right back to Washington, which provided the requisite economic,
military, and diplomatic support. Without such authorization and aid, Israel can do very
little. There are many illusions about this in the Arab countries and elsewhere.
Particularly for the victims, it is not wise to live with illusions.
"

I want a "War of the Cartoons" instead of a "War of Bullits".

You will fight against the Jews and you will kill them
until even a stone would say: Come here, Muslim,
there is a Jew (hiding himself behind me); kill him

what's wrong with this picture?

Of zoek op "Zionism And Herzl"