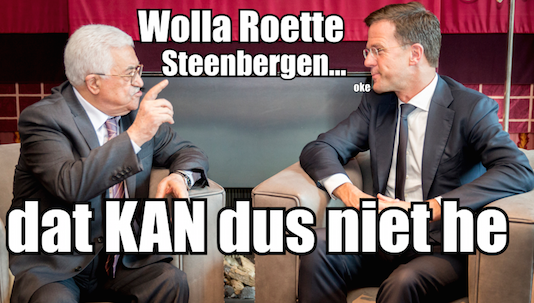 "Not one 'israeli' will be allowed to live in Palestine" (www.timesofisrael.com/abbas-says-there...)
imgur.com/WWHcONc

---
The truth about Jerusalems grand mufti, Hitler and the Holocaust

Israeli Prime Minister Benjamin Netanyahu went too far in recent comments that Nazi collaborator Haj Amin al-Husseini, the Grand Mufti of Jerusalem before and during World War II, played a central role in fomenting the Final Solution by trying to convince Hitler to destroy the Jews during a 1941 meeting in Berlin. But Netanyahu was right on when he emphasized the Muftis Holocaust complicity and activities before, during, and after the war when the Mufti lied about alleged Jewish intentions to expel Muslim and Islam from Jerusalems Temple Mountthe same lie that Palestinian Authority President Mahmoud Abbas repeats today in support of the current knife Intifada.

Netanyahu said: Hitler didn't want to exterminate the Jews at the time, he wanted to expel the Jews. "And Haj Amin al-Husseini went to Hitler and said, If you expel them, they'll all come here.' 'So what should I do with them?' he asked. He said, 'Burn them.

Netanyahus quotation of the Grand Mufti is word-for-word accurate, but it is not true that the Fuhrer needed the advice of Islams leading anti-Jewish fanatic to implement the Final Solution. That was his dream as far back as 1919 as a letter that he authored and signed now on display at the Simon Wiesenthal Center Museum of Tolerance documents.

Prime Minister Netanyahu has been accused of a dangerous historical distortion and even Holocaust Denial from the predictable political quarters who even dismiss the Grand Mufti as a lightweight inconsequential in the history of the Holocaust. This claim wrongly mitigates the Muftis mindset and crimes as one of the Hitler eras leading anti-Jewish haters.

Who was Haj Amin al-Husseini and what was his historical significance? A relative of Yasser Arafat as well as ally of Hassan al-Banna, originator of Hamas parent organization, the Muslim Brotherhood, the Grand Mufti was a moving force behind Palestinian Jew hatred, from the riots of 1920 and 1929 through the 1936-1939 bloody Arab Uprising against the Holy Lands Jewish community, long before his WWII support of Nazi Germany.

According to Historian Robert Wistrichs Hitler and the Holocaust (2001), the Mufti escaped British scrutiny in Jerusalem after the wars outbreak for the more friendly confines of Berlin, where, in November, 1941, he had tea with Hitler who asked him to lock in the innermost depths of his heart that he (Hitler) would carry on the battle to the total destruction of the Judeo-Communist Empire in Europe. In 1942, Fred Grobba wrote approvingly of the Muftis visit with members of the Nazi elite to the concentration camp Oranienburg . . . . The visit lasted about two hours with very satisfying results . . . . the Jews aroused particular interest among the Arabs. . . . It [the visit] . . . made a very favorable impression on the Arabs.

In 1943, the Mufti extended his relations with the German Foreign Office and Abwehr directly to the SS Main Office. Gottlob Berger arranged a meeting between al-Husayni and SS chief Heinrich Himmler on July 3, 1943. Al-Husayni sent Himmler birthday greetings on October 6, and expressed the hope that the coming year would make our cooperation even closer and bring us closer to our common goals. The Grand Mufti also helped organize a Muslim Waffen SS Battalion, known as the Hanjars, that slaughtered ninety percent of Bosnias Jews, and were dispatched to Croatia and Hungary. The Mufti also made broadcasts to the Middle East urging Arabs and Muslims to honor Allah by implementing their own Final Solution.

After the War, Great Britain, the U.S., and Yugoslavia indicted the Mufti as a war criminal, but Yugoslavia dropped its extradition request to France, and legal proceedings were abandoned so as not to upset the Arab world. Escaping back to the Middle East, Al-Husseini continued his genocidal exhortations and rejectionist demands that the Jewish presence be erased from Palestine continued unabated before and during the 1948 War by five Arab states against Israel. Only then, did his influence gradually decline. He died in 1974, not long after Arab armies almost succeeded in destroying Israel in an attack launched on Judaisms holiest day, Yom Kippur.

Far from a light weight, the Grand Mufti will be remembered as one the twentieth centurys most virulent Jew haters and a key cheerleader for Hitlers genocidal Final Solution.

What the actual FUCK!