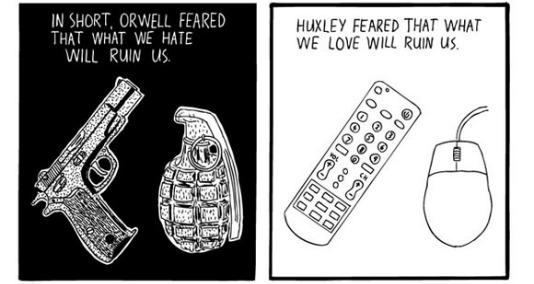 "In this country intellectual cowardice is the worst enemy a writer or journalist has to face, and that fact does not seem to me to have had the discussion it deserves.
(...)
At any given moment there is an orthodoxy, a body of ideas which it is assumed that all right-thinking people will accept without question. It is not exactly forbidden to say this, that or the other, but it is 'not done' to say it, just as in mid-Victorian times it was 'not done' to mention trousers in the presence of a lady. Anyone who challenges the prevailing orthodoxy finds himself silenced with surprising effectiveness.
(...)
[over de Engelse houding tegenover Rusland tijdens de Tweede Wereldoorlog]
You could, indeed, publish anti-Russian books, but to do so was to make sure of being ignored or misrepresented by nearly the whole of the highbrow press. Both publicly and privately you were warned that it was 'not done'. What you said might possibly be true, but it was 'inopportune' and 'played into the hands of' this or that reactionary interest. This attitude was usually defended on the ground that the international situation, and the urgent need for an Anglo-Russian alliance, demanded it; but it was clear that this was a rationalization. The English intelligentsia, or a great part of it, had developed a nationalistic loyalty towards the USSR, and in their hearts they felt that to cast any doubt on the wisdom of Stalin was a kind of blasphemy. Events in Russia and events elsewhere were to be judged by different standards. The endless executions in the purges of 1936-8 were applauded by life-long opponents of capital punishment, and it was considered equally proper to publicize famines when they happened in India and to conceal them when they happened in the Ukraine. And if this was true before the war, the intellectual atmosphere is certainly no better now.
(...)
The English intelligentsia, or most of them, will object to this book because it traduces their Leader and (as they see it) does harm to the cause of progress. If it did the opposite they would have nothing to say against it, even if its literary faults were ten times as glaring as they are. The success of, for instance, the Left Book Club over a period of four or five years shows how willing they are to tolerate both scurrility and slipshod writing, provided that it tells them what they want to hear.
(...)
The issue involved here is quite a simple one: Is every opinion, however unpopular - however foolish, even - entitled to a hearing? Put it in that form and nearly any English intellectual will feel that he ought to say 'Yes'. But give it a concrete shape, and ask, 'How about an attack on Stalin? Is that entitled to a hearing?', and the answer more often than not will be 'No'. In that case the current orthodoxy happens to be challenged, and so the principle of free speech lapses.
(...)
One of the peculiar phenomena of our time is the renegade Liberal. Over and above the familiar Marxist claim that 'bourgeois liberty' is an illusion, there is now a widespread tendency to argue that one can only defend democracy by totalitarian methods. If one loves democracy, the argument runs, one must crush its enemies by no matter what means. And who are its enemies? It always appears that they are not only those who attack it openly and consciously, but those who 'objectively' endanger it by spreading mistaken doctrines. In other words, defending democracy involves destroying all independence of thought.
(...)
These people don't see that if you encourage totalitarian methods, the time may come when they will be used against you instead of for you. Make a habit of imprisoning Fascists without trial, and perhaps the process won't stop at Fascists.
(...)
I am well acquainted with all the arguments against freedom of thought and speech - the arguments which claim that it cannot exist, and the arguments which claim that it ought not to. I answer simply that they don't convince me and that our civilization over a period of four hundred years has been founded on the opposite notice."