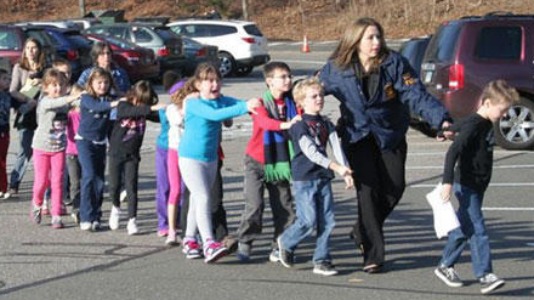 Laws are for nice people!

@Ryan__Lanza Where you around that school in Connecticut dude?
Openen Beantwoorden Retweeten Toevoegen aan favorieten

Do not be deceived, God is not mocked; for whatever a man sows, this he will also reap.

Barack Obama signals he will push for gun control after Connecticut massacre, calling for 'meaningful action to prevent more tragedies like this'
www.dailymail.co.uk/news/article-22483...

- Parents across the nation have begun calling for more security at their children's schools
- Concerned mothers and fathers lined up early to pick their little one up when class got out today
- Obama has previously shied away from the gun control debate but signaled today that he would begin pushing for renewed limits on firearms
- New York Mayor Michael Bloomberg, a prominent gun control advocate, criticized Obama and said the nation needed new gun laws to stop violence

"What I find most disturbing about the Connecticut shooting is that it reveals an essential truth about this country: people are only outraged because it was a massacre that was not sanctioned by the state.

If 18 children were murdered in a Pakistani schoolhouse by a drone, no one in the media would report it and just about everyone would go about their lives not caring. Statism has a horrifically dehumanizing effect on how we perceive other human beings that aren't American."

Did I make myself clear, soldier!

"We - even we here - hold the power, and bear the responsibility. In giving freedom to the slave, we assure freedom to the free-honorable alike in what we give, and what we preserve. We shall nobly save, or meanly lose, the last best hope of earth. - Abraham Lincoln

"Do you know Obamas stand on guns going by his voting record?"
www.arrowridgeenterprise.com/39/do-you...

Oh my sweet disposition
May you one day carry me home.

All the sweetest winds
They blow across the South.
(Oh My Sweet Carolina)

"Here's a short list of government mass murder carried out throughout history, almost always immediately following the disarmament of the public (and usually involving staged false flag events to justify the disarmament):

@newyorkpost is reporting the shooter is Adam Lanza bit.ly/ULvKCF most media including, @AP has identified him as #RyanLanza

"It's the same technique that the FBI and other federal agencies use to create all those christmas tree/shoe bomber token terrorists which are used as political justifications for more police state laws. They simply find people who are already unstable and encourage them to act. For example, with those various bombers, the agent poses as fellow extremist "who knows a guy with connections to get the bomb parts and explosives material." Then he even helps the lunatic build it, and lets him prepare to detonate it, so he can be arrested red-handed. Payoff: sensational headlines, instant political mandate for more laws. It's similar to the techniques used by police while posing as drug dealers, where they impersonate the dealer, even carry around drugs, even sell it to the customers, in order to arrest."

"Anyway, the same methodology can be used with people like this. Encounter them either in person or even online, encourage them to act on their frustrations, etc. The only difference between them setting up bomb patsies and these mass shooter patsies is the latter is dirtier -- people get killed. But I don't think they care."

"And, I'm not saying every such shooter is a patsie. That's impossible, because in that case, you're arguing nobody ever does it alone. I think they do. The only point I'm trying to make is that whenever there is NOT a hugely controversial anti-gun bill pending, these shootings happen maybe once every 2 years. But then when one IS pending, suddenly they happen sometimes monthly or even weekly."

"From a statistical vantage point alone, I cannot believe that things just naturally happen that way. Where you go years with almost nothing, then a huge anti-gun bill comes up, then shitloads of shootings. To me, yes, it's borderline conspiracy to think they would set these things up in order to help them happen. But it's even harder to believe that the pattern I'm talking about isn't being created intentionally."

"So in my mind, that leaves the only possible conclusion: most of these, when they happen in these huge sequences, are assisted to happen for political reasons."

Zoals de man die verstand had van gun control zei:
"One death is a tragedy; one million is a statistic." - Joseph Stalin

Toch vreemd dat @Ryan__Lanza. Nog kan Tweeten Redactie!!
Ryan Lanza &#8207;@Ryan__Lanza
so aperently im getting spammed bc someone with the same name as me killed some ppl... wtf?

so aperently im getting spammed bc someone with the same name as me killed some ppl... wtf?

so aperently im getting spammed bc someone with the same name as me killed some ppl... wtf?

Losing friends fast, 123 and going down.

"Line up the bodies of the children, the thousands of children  the infants, the toddlers, the schoolkids  whose bodies were torn to pieces, burned alive or riddled with bullets during the American invasion and occupation of Iraq. Line them up in the desert sand, walk past them, mile after mile, all those twisted corpses, those scraps of torn flesh and seeping viscera, those blank faces, those staring eyes fixed forever on nothingness.

This is the reality of what happened in Iraq; there is no other reality.

Losing friends fast, 123 and going down.

From what I have read, he killed his mother at the school

"Could Obama use NDAA To Arrest Militias?"
www.judgenap.com/index.php?post=could-...

"Why does Homeland Security need 1.4 BILLION rounds of ammunition?"
www.americanthinker.com/blog/2012/09/w...

A well regulated Militia, being necessary to the security of a free State, the right of the people to keep and bear Arms, shall not be infringed. - Second Amendment, American Constitution

"... as tensions with the Mother Country mounted, militias protected citizens from a new threat: professional soldiers in the British Army."

"Ever notice that every time the gun-grabbers start a new campaign to overturn the 2nd Amendment, there are a lot of convenient shootings that happen?"

HeartBreaking, this is proof the world needs to end right now.

In addition to Utah, Wisconsin and Mississippi each have legislation that allow students, faculty and employees with the proper permit, to carry concealed weapons on their public university's campuses.

We're gonna skate on one VrijMiBo only