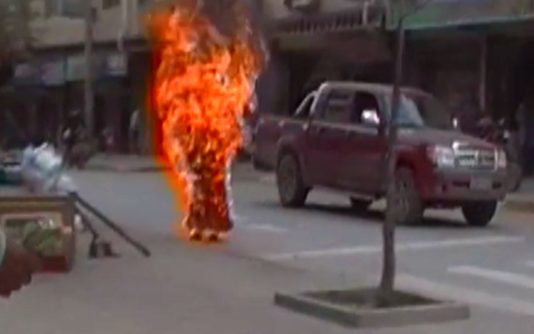 Uit de AFP-plaatjesbank. This frame grab from handout video released by Students for a Free Tibet on November 21, 2011 and taken on November 3, 2011 allegedly shows the self-immolation of an individual along a street in Dawu, Ganzi prefecture in Sichuan province. The dramatic video footage that purportedly captures the moment a Tibetan Buddhist nun burned herself to death in southwest China has emerged after it was smuggled out and given to a campaign group. The video, which AFP cannot independently verify, was posted online by Students for a Free Tibet and shows a figure being engulfed in flames in the middle of a street before collapsing to the ground. CHINA OUT AFP PHOTO / Students for a Free Tibet. Er is ook een VIDEO (mirror). Brandende mensen, daar komen weer lentes van...
@Pritt Stift | 21-11-11 | 13:13 | 203 reacties

Does the pope shit in the woods?

The lesser of two evils is still evil, and the enemy of my enemy is not necessarily my friend.
"Free Tibet". Careful what you wish for.

ROFB ( Rolling of the floor burning )

Some people call me Lucifer.