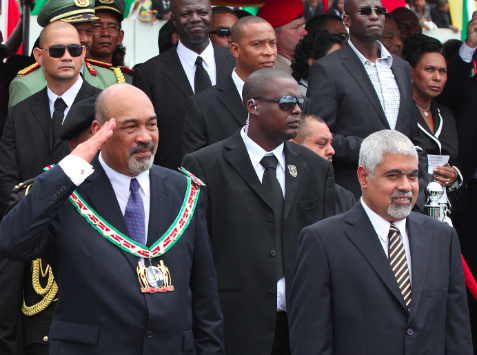 Dear Editor,
I have taken notice of your article in the Guyana Review of July 29, captioned The Hemisphere: Surinames strongman or statesman.

Guyana and Suriname are neighbours and can, once working closely together, create substantial mutual benefits. I am aware that President Jagdeo did acknowledge this and that he did seek closer ties with President Venetiaan. I am also aware did he did try to solve issues in an amicable manner. However, it appeared that President Venetiaan had more attention for the Dutch than for his neighbours France, Brazil and Guyana. This focus on Holland, embodied by President Venetiaan, slowed down economic, social and political progress, not only in Suriname but also in the region.

Mr Bouterse made clear in all his election statements and also in his statements as president-elect that he and his government will give first priority to achieve good co-operation with France (French Guyana), Brazil and Guyana. This has nothing to do with rejecting Holland (I know for a fact that Mr Bouterse likes the Dutch people and enterprises very much) but has everything to do with common sense, accepting the current geo-political situation in Latin America and above all putting your own country first. All presidents of these 3 states made public that they will wholeheartedly  work with President Bouterse and his government.

With this in mind, and again, given the importance of close co-operation between Guyana and Suriname (so much to bind and so little to divide is the right slogan), I deemed it necessary to give you the correct picture with regard to, in my opinion, the intentional tainting of Mr Bouterse as appeared in the Guyana Review article of July 29.

Mr Bouterse was sentenced by The Hague Court of Appeal to 11 years in prison for the importation of 474 kilos of cocaine into the small Dutch fishing port of Stellendam, for which a Belgian national (name supplied) with a long history of drug-related crimes and prison-time, was apprehended and sentenced on appeal to 8 years in prison before the case of Mr Bouterse was heard. At the time of his appeal and before that in a lesser court, the Belgian witness never mentioned any relation or contact with Mr Bouterse or any close associate of Mr Bouterse.

The verdict of January 2000 against Mr Bouterse was solely based on the testimony of the Belgian. Other allegations of the importation of drugs and being the leader of a criminal organization (in total 7 counts) were thrown out by the Appeal Court as all witnesses for these allegations were regarded as unreliable.

The testimony of the Belgian was very detailed and that alone should have alarmed the Appeal Court given his education, background and practices. However, the court considered the testimony valid, and sentenced Mr Bouterse to 11 years. The fact that the Belgian witness was the subject of another investigation for drug-related crimes in the Dutch city of Arnhem did not alarm the prosecution nor the judges of the Appeal Court.

A number of years later a new article was inserted into the Dutch Penal Code (Article 360 Wetboek van Strafvordering) clearly stating that a suspected criminal cannot be convicted based only on the testimony of a convicted criminal. The same article, in conjunction with other articles, sets out more conditions needed to secure a guilty verdict.

If article 360 were to be applied to the verdict of January 2000, it would be null and void. If the case against Mr Bouterse had been tried in the European Court of Strasbourg the judges would almost certainly have nullified the verdict as being against the principles of the right to a fair trial as defined in Article 6 of the European Treaty in relation to human rights.

The Belgian witness in his plea bargain with the Dutch prosecution was promised a reduction of 21 months in his earlier sentence of 8 years in prison, by means of the Queens grace. The Dutch grace system is poorly regulated which creates ample space for abuse.

The appeal against the Bouterse verdict of January 2000 in the Dutch Supreme Court was rejected mainly because of formal mistakes made by the defence. A subsequent appeal to the European Court in Strasbourg was submitted one day late, which meant that the case could not be heard by this court.

I am sure that after the inauguration of Mr Bouterse on August 12, expert lawyers from outside Suriname will study the legal aspects of the December 1982 murder trial in Suriname and come to the conclusion that the trial does not have the legal basis that is required by international and national law. I am also sure that enough evidence will surface that will show that the conduct of this trial does comply with national and international law.

The MC is also the only true multi-ethnic party in Suriname with over 120,000 registered members (on May 25, 2010 about 324,000 persons were eligible to vote). The MC has 23 seats in Parliament (out of 51 seats) with members of all races elected by the people. The MC on May 25 achieved the majority of all district and resort council members (more than 850 members in total). A majority of the youth of all races voted for the MC.

In the jungle, the mighty jungle, Delano sleeps tonight