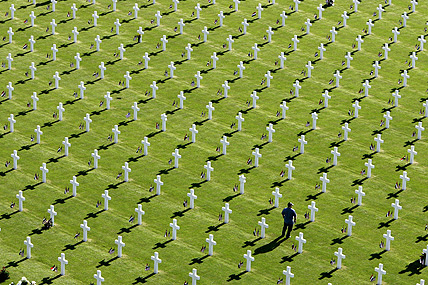 'Soupnazi' is en blijft een klassieker. No more soup for you, biomass..

is roo in slaap gevallen????

"God is a concept by which we measure our pain."

@Koerbagh The Queen is Dead is een cd van the Smiths, waar ik 't over had :)

@ Koerbagh ik was in de war

Since it is obviously inconceivable that all religions can be right, the most reasonable conclusion is that they are all wrong.
- Christopher Hitchens

I am as firmly convinced that religions do harm as I am that they are untrue.
- Bertrand Russell

It is wrong always and everywhere for anyone to believe anything on insufficient evidence.
- William Clifford

I used to believe in god, until I reached the age of reason.
- George Carlin

If only god would give me some clear sign! Like making a large deposit in my name at a Swiss Bank.
- Woody Allen

Our god is vengeful! Oh spiteful one, show me who to smite and they shall be smoten.
- Homer Simpson

Dear lord: I present you this offering of cookies and milk. If you want me to eat them for you, give me no sign. Thy will be done.
- Homer Simpson

Blasphemy is a victimless crime.
- Unknown

Moet dat niet zijn: The Queen is Dead, it was in the war?

of zoals George Carlin zei: "religion has actually convinced people that there's an invisible man living in the sky."

@roo dat is The Queen is Dead, was in de war. Dessalniettemin: Wahnsinn !

mocht je willen. verkrachting is onderdeel de beloning.
.
""In the spring of 1994, Moroccan troops of the French army entered the country. People have not yet forgotten what then happened in some towns of the Frosinate region. All the women who did not have time to take shelter in the mountains were, as they say, `moroccanated' there is no consideration for the age of the women; every woman, from ten to seventy, was raped. (A brief parenthesis on the colonial problem is worthwhile. About that same time, General Juin commander of the French armed forces in Italy, was received by the Pope. The Pope complained to him about the immunity granted to the soldiers responsible for the brutalities. The general informed him that North African soldiers could not be punished since the war code of the French army granted to these troops, in enemy territory, the right to rape and plunder.)"

geen dingetjes weglaten als het je niet uitkomt he.
.
"Soldiers at war often rape. The Russians raped their way across Prussia and East Germany. The Serbians seem to have rape camps, and the Hutu militia seem to have systematically raped Tutsi women. War-time rape probably involves a number of variables: the desire for sexual release after a period of danger, the absence of law, and a desire to humiliate the enemy "
.
I wonder if any trials of these alleged rapes by Moroccan troops ever occurred? Given the racisim at the time, it seems to me that the diligent historian could dig through the court records of the various cities (or at least the miliatry tribunals) and find some evidence.

My point is that I am reminded of the wartinme propaganda spread by the U.S. military in France during World War I. The object of villification was African American soldiers. The specter of rape was raised (along with other bogeys) to dissuade the French population from associating with the black liberators. A special envoy was even sent to them (I believe it was Ralph Bunche but I may be in gross error). At any rate, according to a special order from General Pershing's headquarters dated August 17, 1918, the French as well as the white Americans had to "Make a point of keeping the native cantonment population from 'spoiling' the Negroes... Americans become greatley incensed at any public expression of intimacy betweeen white women and black men."
.
Cora Presley, Tulane University

De volgende aspecten zullen wel niet toegelicht worden.
General George F. Patton, Jr., *War as I Knew It*, wrote (p. 71): "One funny thing happened in connection with the Moroccan troops,. A Sicilian came to me and said he had a complaint to make about the conduct of the Moroccans, or Goums, as they are called. He said he well knew that all Goums were thieves, also that they were murderers, and sometimes indulged in rape--these things he could understand and make allowances for, but when they came to his home, killed his rabbits, and then skinned them in the parlor, it was going too far."

Not an Italian example, but perhaps relevant, was a report issued by the German police chief of Stuttgart in August 1945 in which he stated that local police had verified 1,198 cases of rape. The ages of the victims ranged from 14 to 74 and most of them "were attacked in their homes by turbaned Moroccans who broke down the doors in looting forays. Four of the women were killed by their attackers, and four others committed suicide. One of the victims was killed by her husband who then killed himself. ["Rape Story Dispute Grows in Stuttgart," *New York Times*, August 11, 1945, p. 10]
The quotes below are from an article by Ignazio Silone entitled "Reflections on the Welfare State" which appeared in *Tempo Presente* (December 1960) and was translated for the spring 1991 (8:2) issue of *Dissent*. The quote speaks directly to the absence of any records of trials of Moroccans:

"In the spring of 1994, Moroccan troops of the French army entered the country. People have not yet forgotten what then happened in some towns of the Frosinate region. All the women who did not have time to take shelter in the mountains were, as they say, `moroccanated' there is no consideration for the age of the women; every woman, from ten to seventy, was raped. (A brief parenthesis on the colonial problem is worthwhile. About that same time, General Juin commander of the French armed forces in Italy, was received by the Pope. The Pope complained to him about the immunity granted to the soldiers responsible for the brutalities. The general informed him that North African soldiers could not be punished since the war code of the French army granted to these troops, in enemy territory, the right to rape and plunder.)"
There is a chapter [of two pages!] entitled "Marocchini" [Moroccans] in Sergio Lambiase e G. Battistsa Nazzaro, *Napoli 1940-45* (Milano: Longanesi, 1978), a sort of picture book with commentaries.

Briefly, it states that: the two Moroccans who posed for the photograph symbolize potentates of victory, and that of all the colourful peoples of Naples, they are the most marked, and also, the most DANGEROUS ["piu pericolose"]. The Moroccans inaugurated a mythology of evil and of violence with their confrontation with the weak - women, children... To say "Marocchini" signifies the evocation of a situation at the limits.. "Barbarians" and "savages", the Moroccans give themselves up in reality to a practice - vilonce and rape - which is that of all conquerors and "colonizers."... This demonization of Moroccans has roots in racist and imperialist ideology of fascism,....[they then compare the attitude to the "normal" behaviour of the American and British, in comparison to which the Moroccans were viewed as obscene...

It concludes, and to save time [and embarassment at my rather weak Italian] I'll quote:

Thanks!! Rest in peace

"I walked down the street in Barcelona, and suddenly discovered a terrible truth - Europe died in Auschwitz.

We killed six million Jews and replaced them with 20 million Muslims. In Auschwitz we burned a culture, thought, creativity, and talent. We destroyed the chosen people, truly chosen, because they produced great and wonderful people who changed the world.

The contribution of this people is felt in all areas of life: science, art, international trade, and above all, as the conscience of the world. These are the people we burned. And under the pretense of tolerance, and because we wanted to prove to ourselves that we were cured of the disease of racism, we opened our gates to 20 million Muslims, who brought us stupidity and ignorance, religious extremism and lack of tolerance, crime and poverty due to an unwillingness to work and support their families with pride.

They have turned our beautiful European cities into the third world, drowning in filth and crime. Shut up in the apartments they receive free from the government, they plan the murder and destruction of their naive hosts.

And thus, in our misery, we have exchanged culture for fanatical hatred, creative skill for destructive skill, intelligence for backwardness and superstition.

We have exchanged the pursuit of peace of the Jews of Europe and their talent for hoping for a better future for their children, their determined clinging to life because life is holy, for those who pursue death, for people consumed by the desire for death for themselves and others, for our children and theirs.

What a terrible mistake was made by miserable Europe"