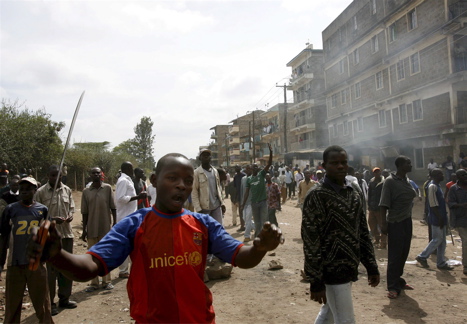 It pledges the support of Kenyan Moslems for Raila's election. In return, as President of Kenya, Raila agrees to 14 actions, listed a) through n) on page two. Read them all, and be sure you're sitting down. Here's a sample:

b) Within 6 months re-write the Constitution of Kenya to recognize Shariah as the only true law sanctioned by the Holy Quran for Muslim declared regions.

c) With immediate effect dismiss the Commissioner of Police who has allowed himself to be used by heathens and Zionists to oppress the Kenyan Muslim community.

g) Within one year facilitate the establishment of a Shariah court in every Kenyan divisional headquarters. [Note: everywhere in Kenya, not just in "Muslim declared regions."]

Again, read all of them, for others are just as bad or worse.

It may also not surprise you that Raila is not Moslem himself, but claims to be a practicing Anglican. Only a minority of Luo are Moslem (most are Christian). Kenya on the whole is Christian, with 80% of Kenyans either Protestant or Roman Catholic, while only 10% are Moslem.

And here is the biggest non-surprise: Raila Odinga has, in his own words, a "close personal friendship" with Barrack Hussein Obama Junior.