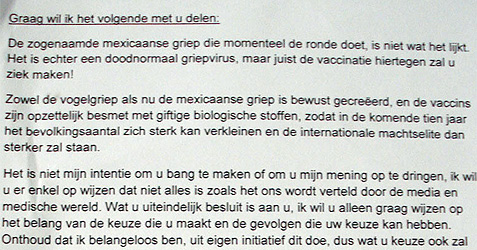 "The paranoia behind a conspiracy theorist's obsession with mind control, occultism, surveillance abuse, Big Business, Big Government, and globalization arises from a combination of two factors, when he or she: 1) holds strong individualist values and 2) lacks a sense of control. The first attribute refers to people who care deeply about an individual's right to make their own choices and direct their own lives without interference or obligations to a larger system (like the government). But combine this with a sense of powerlessness in one's own life, and one gets what some psychologists call agency panic, intense anxiety about an apparent loss of autonomy to outside forces or regulators. When fervent individualists feel that they cannot exercise their independence, they experience a crisis and assume that larger forces are to blame for usurping this freedom"
en.wikipedia.org/wiki/New_World_Order_...)

And an official of the World Health Organizations European operation said the body is closely monitoring the investigation into the events that took place at Baxter Internationals research facility in Orth-Donau, Austria.

At this juncture we are confident in saying that public health and occupational risk is minimal at present, medical officer Roberta Andraghetti said from Copenhagen, Denmark.

But what remains unanswered are the circumstances surrounding the incident in the Baxter facility in Orth-Donau.

The contaminated product, a mix of H3N2 seasonal flu viruses and unlabelled H5N1 viruses, was supplied to an Austrian research company. The Austrian firm, Avir Green Hills Biotechnology, then sent portions of it to sub-contractors in the Czech Republic, Slovenia and Germany.

The contamination incident, which is being investigated by the four European countries, came to light when the subcontractor in the Czech Republic inoculated ferrets with the product and they died. Ferrets shouldnt die from exposure to human H3N2 flu viruses.

Public health authorities concerned about what has been described as a serious error on Baxters part have assumed the death of the ferrets meant the H5N1 virus in the product was live. But the company, Baxter International Inc., has been parsimonious about the amount of information it has released about the event.

On Friday, the companys director of global bioscience communications confirmed what scientists have suspected.

It was live, Christopher Bona said in an email.

The contaminated product, which Baxter calls experimental virus material, was made at the Orth-Donau research facility. Baxter makes its flu vaccine  including a human H5N1 vaccine for which a licence is expected shortly  at a facility in the Czech Republic.

People familiar with biosecurity rules are dismayed by evidence that human H3N2 and avian H5N1 viruses somehow co-mingled in the Orth-Donau facility. That is a dangerous practice that should not be allowed to happen, a number of experts insisted.

Accidental release of a mixture of live H5N1 and H3N2 viruses could have resulted in dire consequences.

While H5N1 doesnt easily infect people, H3N2 viruses do. If someone exposed to a mixture of the two had been simultaneously infected with both strains, he or she could have served as an incubator for a hybrid virus able to transmit easily to and among people.

That mixing process, called reassortment, is one of two ways pandemic viruses are created.

There is no suggestion that happened because of this accident, however.

And we have no evidence of any increased transmissibility of the viruses that were involved in the experiment with the ferrets in the Czech Republic.

Baxter hasnt shed much light  at least not publicly  on how the accident happened. Earlier this week Bona called the mistake the result of a combination of just the process itself, (and) technical and human error in this procedure.

He said he couldnt reveal more information because it would give away proprietary information about Baxters production process.

Andraghetti said Friday the four investigating governments are co-operating closely with the WHO and the European Centre for Disease Control in Stockholm, Sweden.

We are in very close contact with Austrian authorities to understand what the circumstances of the incident in their laboratory were, she said.

"www.torontosun.com...
While H5N1 doesnt easily infect people, H3N2 viruses do. If someone exposed to a mixture of the two had been simultaneously infected with both strains, he or she could have served as an incubator for a hybrid virus able to transmit easily to and among people.
De laboratoria's die het "vaccin" kregen waren niet op de hoogte van de aanwezigheid van h5n1 in het vaccin...
Hier nog een ander linkje over experimentele vaccins...

Switchboy | 26-07-09 | 00:14
www.cdc.gov/OD/ohs/symp5/jyrtext.htm
Hier wat achtergrond informatie over de mate van veiligheid die er in een p3 lab moet worden gehanteerd.
www.torontosun.com/news/canada/2009/02...
While H5N1 doesnt easily infect people, H3N2 viruses do. If someone exposed to a mixture of the two had been simultaneously infected with both strains, he or she could have served as an incubator for a hybrid virus able to transmit easily to and among people.
De laboratoria's die het "vaccin" kregen waren niet op de hoogte van de aanwezigheid van h5n1 in het vaccin...
Hier nog een ander linkje over experimentele vaccins...

"There is evidence that an international corporate criminal syndicate, which has annexed high government office at Federal and State level, is intent on carrying out a mass genocide against the people of the United States by using an artificial (genetic) flu pandemic virus and forced vaccine program to cause mass death and injury and depopulate America in order to transfer control of the United States to the United Nations and affiliated security forces (UN troops from countries such as China, Canada, the UK and Mexico).... bit.ly/xZsh7

there is no cabal

I don NOT suffer from stress; I'm a carrier.
*ghe ghe*