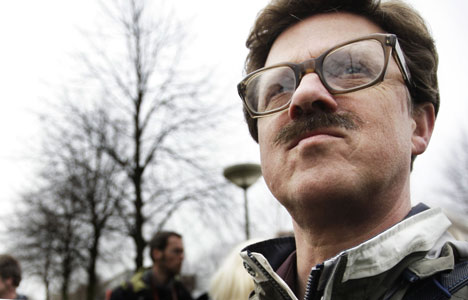 "Thousands of Dutch people demonstrated Saturday in Amsterdam to show that Wilders does not represent the whole country. "

Bertus, uit de bijbel, jou gristelijke vrouwlievende cultuurtje weet je wel:
When a man sells his daughter as a slave, she will not be freed at the end of six years as the men are. If she does not please the man who bought her, he may allow her to be bought back again. But he is not allowed to sell her to foreigners, since he is the one who broke the contract with her. And if the slave girl's owner arranges for her to marry his son, he may no longer treat her as a slave girl, but he must treat her as his daughter. If he himself marries her and then takes another wife, he may not reduce her food or clothing or fail to sleep with her as his wife. If he fails in any of these three ways, she may leave as a free woman without making any payment. (Exodus 21:7-11 NLT)

Bijbel: However, you may purchase male or female slaves from among the foreigners who live among you. You may also purchase the children of such resident foreigners, including those who have been born in your land. You may treat them as your property, passing them on to your children as a permanent inheritance. You may treat your slaves like this, but the people of Israel, your relatives, must never be treated this way. (Leviticus 25:44-46 NLT)

As you approach a town to attack it, first offer its people terms for peace. If they accept your terms and open the gates to you, then all the people inside will serve you in forced labor. But if they refuse to make peace and prepare to fight, you must attack the town. When the LORD your God hands it over to you, kill every man in the town. But you may keep for yourselves all the women, children, livestock, and other plunder. You may enjoy the spoils of your enemies that the LORD your God has given you.

They attacked Midian just as the LORD had commanded Moses, and they killed all the men. All five of the Midianite kings  Evi, Rekem, Zur, Hur, and Reba  died in the battle. They also killed Balaam son of Beor with the sword. Then the Israelite army captured the Midianite women and children and seized their cattle and flocks and all their wealth as plunder. They burned all the towns and villages where the Midianites had lived. After they had gathered the plunder and captives, both people and animals, they brought them all to Moses and Eleazar the priest, and to the whole community of Israel, which was camped on the plains of Moab beside the Jordan River, across from Jericho.

Moses, Eleazar the priest, and all the leaders of the people went to meet them outside the camp. But Moses was furious with all the military commanders who had returned from the battle. "Why have you let all the women live?" he demanded. "These are the very ones who followed Balaam's advice and caused the people of Israel to rebel against the LORD at Mount Peor. They are the ones who caused the plague to strike the LORD's people. Now kill all the boys and all the women who have slept with a man. Only the young girls who are virgins may live; you may keep them for yourselves.

So they sent twelve thousand warriors to Jabesh-gilead with orders to kill everyone there, including women and children. "This is what you are to do," they said. "Completely destroy all the males and every woman who is not a virgin." Among the residents of Jabesh-gilead they found four hundred young virgins who had never slept with a man, and they brought them to the camp at Shiloh in the land of Canaan.