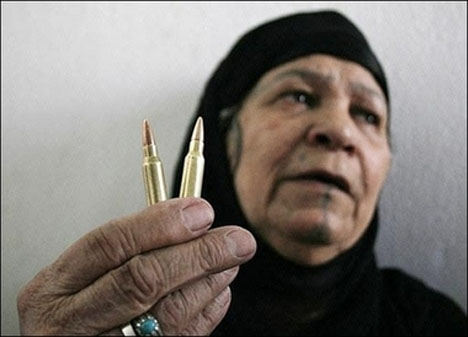 "Nobody is watching. The weather is nice so everybody is playing Jihad outside or is already in jail where they cannot call. I want someone to call me and tell me what the difference is. Please? Anyone? I look at the redaction now... Can I give another hint? Ok.... Here it comes... It is on the TOP of my mind! Anyone?"

According to this iraqi women, "These lipsticks you'll find everywhere on the street since the american invasion are an offense to islam".

After years of frantic searching, an Iraqi woman finally found the Golden Bullet that was put in one of the ammunition boxes distributed by the Iranian Republican Guard back in 2001. The Golden Bullet competition was one of the must successful competitions in the history of the Middle East, sparking many conflicts just as an excuse to get more ammunition. The Iraqi woman, who wants to remain unnamed, describes how she was preparing the guns for her six sons as she does every night: "It was a miracle. I´ve seen thousands and thousands of the traditional red-tipped bullet (shown on the left) going through my hands and suddenly there is was, a shiny golden bullet!".

The Iraqi women now needs to travel to Iran to claim the most sought-after prize that comes with the Golden Bullet: A life-time supply of Veet.

of ze woont in een zandkasteel....