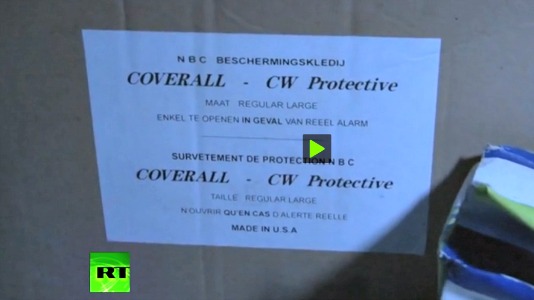 Have a worthfull day Ash. there are more T-bones at steak.

@Houtbar 07:18
Ik hoor je. Daar draait het leven om.
To the world you're just one person, but to one person you're the world.

@Gisksard Reventlov 06:30
Nine months, just like the most of us?

@Houtbar 04:55
Haha. Don't be afraid. Nobody will be able to decipher Ur attempt to PUT something back on the map.
I guess that's just the way the cookie crumbles. ^^

Hey NSA, I checked U with my double barreled bone to get to ya fucked up nigga President WHO fucked shit up like .... Well like no nigga would! This make you a punk WHO is a discrease to all kind. Obouma, we know your kind.

Hey Obama, you are on track to make racism back on the map like it was never before.

"At the moment, I am not totally convinced because the people that are helping them are without any protective clothing and without any respirators," said Paula Vanninen, director of Verifin, the Finnish Institute for Verification of the Chemical Weapons Convention.

Stephen Johnson, an expert in weapons and chemical explosives at Cranfield Forensic Institute, said that the video footage looked suspect:

"There are, within some of the videos, examples which seem a little hyper-real, and almost as if theyve been set up. Which is not to say that they are fake but it does cause some concern. Some of the people with foaming, the foam seems to be too white, too pure, and not consistent with the sort of internal injury you might expect to see, which youd expect to be bloodier or yellower."

"Dan Kaszeta, a former officer of the U.S. Army's Chemical Corps and a leading private consultant, pointed out a number of details absent from the footage so far: "None of the people treating the casualties or photographing them are wearing any sort of chemical-warfare protective gear," he says, "and despite that, none of them seem to be harmed." This would seem to rule out most types of military-grade chemical weapons, including the vast majority of nerve gases, since these substances would not evaporate immediately, especially if they were used in sufficient quantities to kill hundreds of people, but rather leave a level of contamination on clothes and bodies which would harm anyone coming in unprotected contact with them in the hours after an attack. In addition, he says that "there are none of the other signs you would expect to see in the aftermath of a chemical attack, such as intermediate levels of casualties, severe visual problems, vomiting and loss of bowel control."

Just for the fun of it !

"The war is not meant to be won, it is meant to be continuous. Hierarchical society is only possible on the basis of poverty and ignorance. This new version is the past and no different past can ever have existed. In principle the war effort is always planned to keep society on the brink of starvation. The war is waged by the ruling group against its own subjects and its object is not the victory over either Eurasia or East Asia, but to keep the very structure of society intact."-Orwell
... anyway. zolang die oorlog in die zandbak plaatsvind is alles onder controle en precies zoals de bedoeling was, zodat we hier op een geciviliseerde manier kunnen blijven leven.