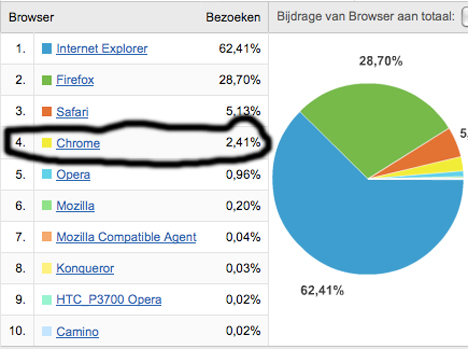 Weten we dat ook weer.
next

Google on Chrome EULA controversy: our bad, we'll change it

Google's new web browser Chrome is fast, shiny, and requires users to sign their very lives over to Google before they can use it. Today's Internet outrage du jour has been Chrome's EULA, which appears to give Google a nonexclusive right to display and distribute every bit of content transmitted through the browser. Now, Google tells Ars that it's a mistake, the EULA will be corrected, and the correction will be retroactive.

As noted by an attorney at Tap the Hive and various and sundry other sites, the Chrome EULA reads like a lot of Google's other EULAs. It requires users to "give Google a perpetual, irrevocable, worldwide, royalty-free, and nonexclusive license to reproduce, adapt, modify, translate, publish, publicly perform, publicly display and distribute any Content which you submit, post or display on or through, the Services."

"Services" seems like an odd way to describe a web browser, but the EULA makes clear that "Services" refers to "Googles products, software, services and web sites." The EULA's indication that Google could republish anything even "displayed" in the browser sounded a tiny bit evil, even if Google might just be looking to stave off lawsuits.


Google has been in EULA trouble before over services like Google Docs. In that case, the company changed the terms of service to clarify that, in the words of a spokesperson, "Your fantasy football spreadsheets are not going to end up shared with the world unless you want them to be."

Here at Ars, our first thought on reading the EULA was that it looks a whole lot like the EULAs Google uses for other services, with the "content license" provision being an obvious example of this. In fact, that's basically what it was.

Google's Rebecca Ward, Senior Product Counsel for Google Chrome, now tells Ars Technica that the company tries to reuse these licenses as much as possible, "in order to keep things simple for our users." Ward admits that sometimes "this means that the legal terms for a specific product may include terms that don't apply well to the use of that product" and says that Google is "working quickly to remove language from Section 11 of the current Google Chrome terms of service. This change will apply retroactively to all users who have downloaded Google Chrome."

It's worth noting that the EULA is largely unenforceable because the source code of Chrome is distributed under an open license. Users could simply download the source code, compile it themselves, and use it without having to agree to Google's EULA. The terms of the BSD license under which the source code is distributed are highly permissive and impose virtually no conditions or requirements on end users.

So, there you have it: a tempest in a (chrome) teapot. Not that it's the only one; as Ina Fried of News.com points out, Chrome's "Omnibar" can also access all keystrokes a user types, and Google will store some of this information along with IP addresses.