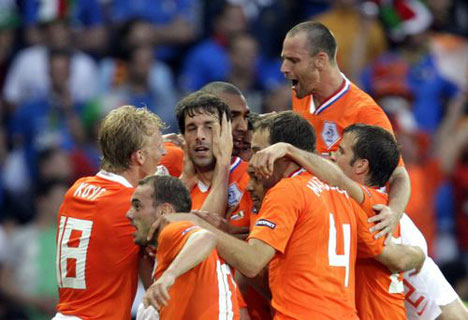 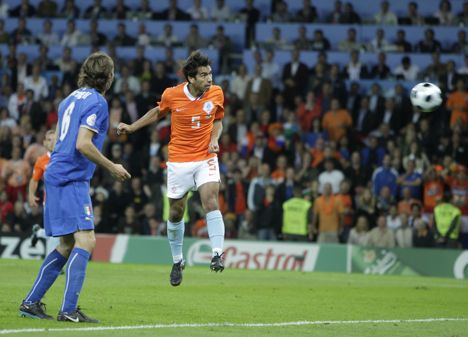 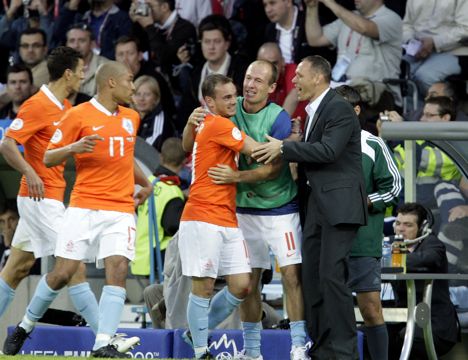 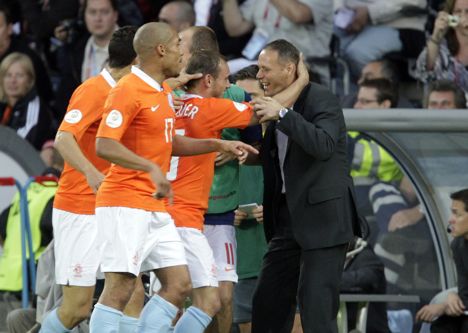 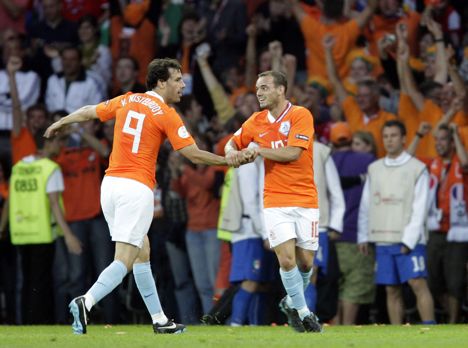 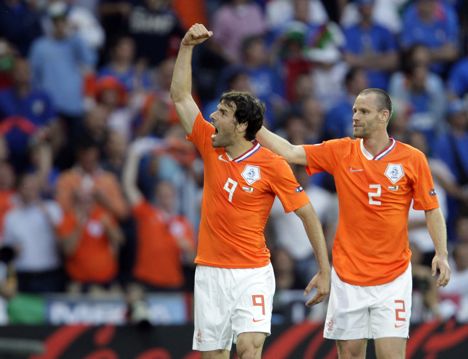 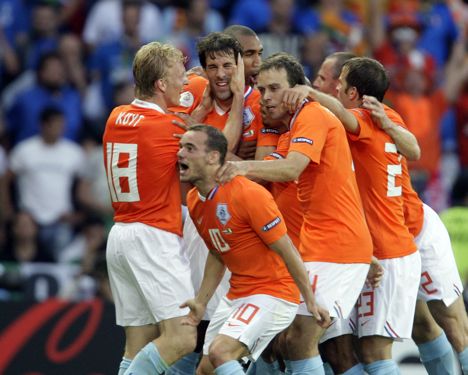 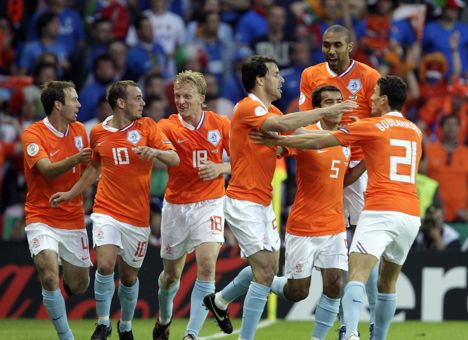 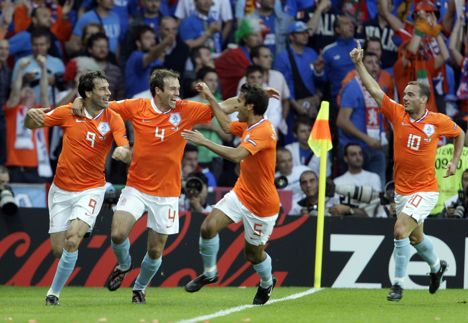 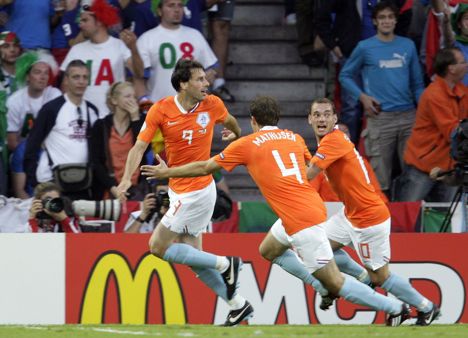 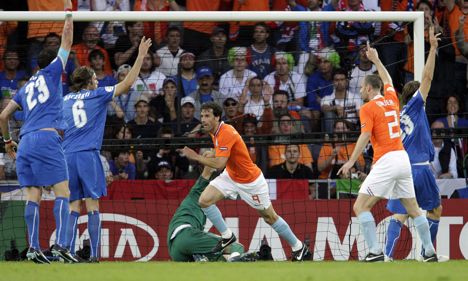 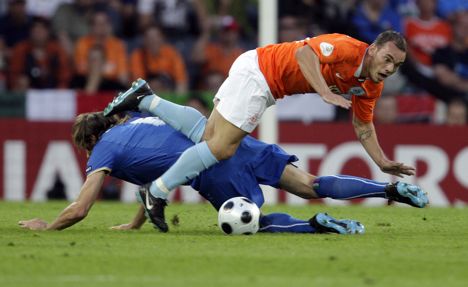 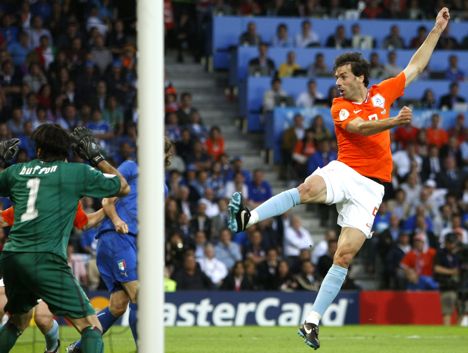 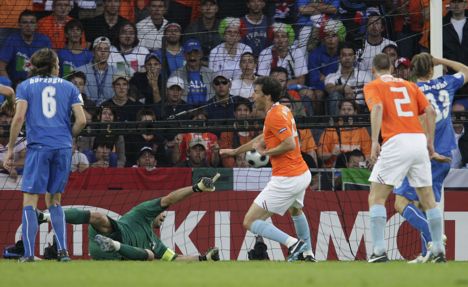 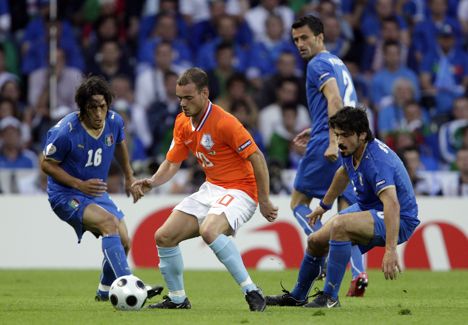 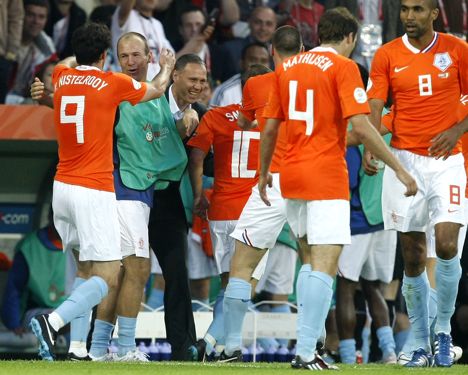 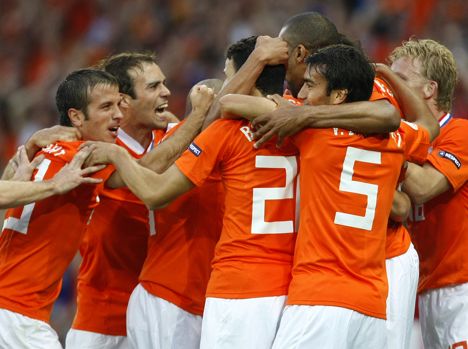 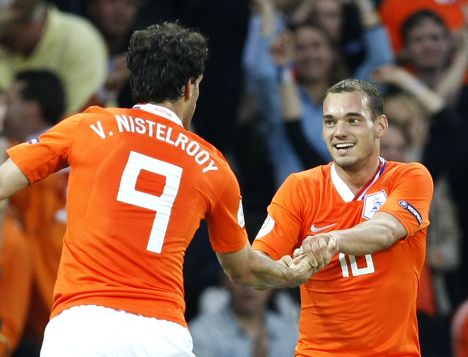 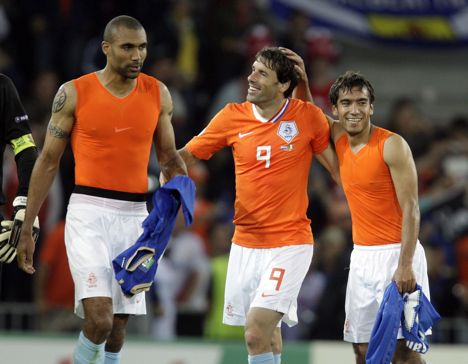 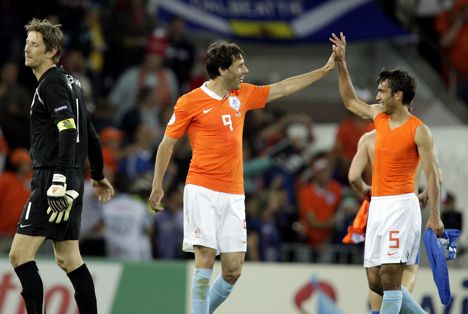 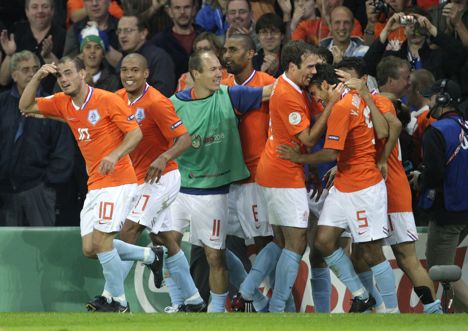 It aint over till the fat lady sings..

Of gaat het alweer over moslims?

Het is pas de éérste wedstrijd, so let's not start sucking eachothers dicks quite yet.

Ruud van Nistelrooy put the Dutch ahead in controversial circumstances after 26 minutes when he scored from close range - but looked suspiciously offside.

Euro 2008 has made a low-key start, but this was a game to set any tournament alight as the Dutch played in a stunning counter-attacking style and Italy also showed flashes of brilliance, despite ending up well beaten.

Holland are in pole position to qualify after France's dismal goalless draw with Romania, but World Cup holders Italy - even in defeat - suggested they can still go through from this tough group.

606: DEBATE
What a brilliant game. Great attacking football but then some outstanding saves from the goalkeepers

Marco van Basten's side started the game accompanied by the usual question marks about fractured spirit with the Dutch camp, but answered in style with their first win over Italy in 30 years.

After the dreadful fare on offer in the earlier game between France and Romania, the opening 45 minutes produced by two of the tournament favourites provided a glorious contrast.

Italy created the first moments of danger, with Antonio di Natale's cross just failing to find Luca Toni as he closed in six yards out.

The giant Bayern Munich striker then headed Gennaro Gattuso's cross wide from a good position as all the early signs pointed to a fast, flowing and positive contest.

Van Nistelrooy posted the warning signals for Italy as early as the 17th minute when he collected Kuyt's pass and attempted to round keeper Gianluigi Buffon.

Buffon made contact with Van Nistelrooy but the striker - who had a reputation for going to ground too easily when he was with Manchester United - chose to stay on his feet and the chance was gone.

Van Nistelrooy had better luck when he gave the Dutch the lead in hugely questionable circumstances after 26 minutes, standing in what looked like an offside position when he steered Sneijder's shot past Buffon.

Italy were understandably furious, and there had to be a measure of sympathy for Toni as he was booked by referee Peter Frojdfeldt amid the protests.

And Italy's agony increased when the Netherlands doubled their advantage five minutes later via a wonderful flowing move that swept the length of the field.

Van Bronckhorst had just made a vital clearance, but was then ambitious and energetic enough to attack and send a long crossfield pass to find the head of Kuyt.

The Liverpool forward was back-pedalling, but was still able to steer the ball into the path of Sneijder, who turned a neat close-range finish beyond Buffon.

Van Nistelrooy had the opportunity to kill the game off three minutes before the interval when he was picked out by a magical pass from Real Madrid team-mate Sneijder, but Buffon made a crucial stop.

Italy had not played badly, and it was no surprise that they stepped the pace after the break in a bid to put the pressure back on the Netherlands.

Veteran Alessandro del Piero was introduced for Di Natale, and he forced Van der Sar into a smart save after 65 minutes.

He then had another clear chance when he was picked out by Pirlo, but this time he was wastefully off target.

Toni had not been at his best in front of goal, and he wasted another clear opportunity with 15 minutes left, lofting substitute Antonio Cassano's pass over Van der Sar but also over the bar.

Van der Sar then came to the Netherlands' rescue twice in the space of seconds in a passage of play that eventually led to his side's third goal after 78 minutes.

The Manchester United keeper blocked crucially from Grosso and then saved acrobatically from Pirlo's free-kick before Holland once again demonstrated their ruthlessness on the counter attack.

Pirlo was still wondering how Van der Sar had stopped his effort when Van Bronckhorst surged forward once more to set up Kuyt.

Kuyt saw his original effort saved by Buffon, but he tirelessly retrieved the ball and crossed for Van Bronckhorst to head home, despite the best efforts of Italy defender Gianluca Zabrotta.

Italy could barely believe they were three goals down, but it could have been worse as Dutch substitutes Ibrahim Afellay and Robin van Persie were just off target with spectacular efforts.

The Dutch were worthy winners of a magnificent game - and made it clear they have the quality to have a major impact on Euro 2008.

zie hier:
The Dutch were worthy winners of a magnificent game - and made it clear they have the quality to have a major impact on Euro 2008

Yay! Football as it should be!